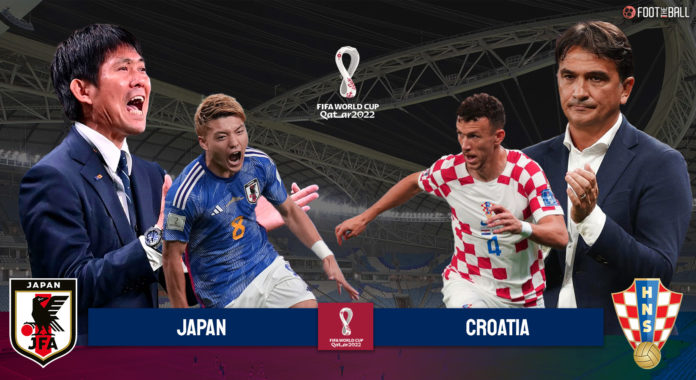 Croatia have never lost in the Round of 16 in a men’s FIFA World Cup while Japan have never gone beyond this stage. However, when these two meet on Monday at the Al Janoub Stadium, the historical facts won’t mean a thing, and in all candour, fearless Japanese will be a cause of grave concern for Zlatko Dalić’s Croatia.

Hajime Moriyasu’s incredibly bold Japan have been the story of the tournament. By beating the 2014 and 2010 men’s World Cup winners to finish on top of Group E, booting out Germany in the process, they’ve accomplished the unthinkable.

Although the Samurai Blue unexpectedly lost 1-0 to Costa Rica on matchday 2, mostly they’ve been a meticulous, superbly well-organised, and hard-working unit in this campaign.

They’ve followed the template of defending with a mid-block, staying compact and narrow, usually playing on the counter, and selectively but vigorously squeezing their opponents – especially in the second half while chasing the game – by pressing high and hard.

For example, let’s look at the game against Spain: Despite setting up for counterattacks and only controlling a miserly share of possession (18%), Moriyasu’s team was highly efficient and thoroughly direct when moving forward. In the limited time that they spent on the ball, they managed to better Spain’s xG of 1 with 36.8% of their passes being progressive and forward.

This template has evidently done wonders for them, and expect them to do more of the same against a Luka Modrić-led Croatia.

Croatia’s journey so far, on the other hand, has not been as smooth as desired. They were surprisingly dull in their draw against Morocco and, in their final game, in an all-hands-on-deck situation, the Vatreni endured a rampage of Belgian incursions in the final 20 minutes of the fixture, and only have the sloppiness of Belgium and Romelu Lukaku to thank for their progression into the next round.

The highest point of their campaign was the crucial 4-1 victory over Canada, where their gameplay, orchestrated by their midfield base, had a touch of liquidity about it while an inspired Andrej Kramarić bagged a brace. The Croats notched up an impressive xG of 2.6 and hit the target 10 times. They would love to touch these levels on Monday.

Moreover, with the know-how of handling tournament football of the highest degree, a majestic fulcrum of Modrić, Mateo Kovačić, and Marcelo Brozović, and the safety of an in-form Josko Gvardiol at centre-back, Dalić’s side would fancy their chances to halt Japan’s dream run.

With the most tackles won (5) and interceptions made for his team (4), Ko Itakura has been the embodiment of Japan’s defensive shield in this campaign. The absence of Borussia Monchengladbach’s defender, who has played every minute for them till now, due to suspension will be a big loss for Japan.

Croatia are the happier of the two sides, in terms of player availability, as they have a full roster to select from.

A commonality of Japan’s both comeback victories was the change in their intensity and approach after Moriyasu’s halftime words., which incidentally caught Germany and Spain napping and left them shell-shocked.

Another commonality of these wins was the impetus and incision provided by the attacking, 25-year-old super-sub, Kaoru Mitoma, who has also lit the Premier League this season, playing for Brighton. Sharp and swift, Mitoma loves to dribble with swagger in wide areas.

Performing the role of an impactful sub, he’s featured only for 106 minutes but he’s the team’s second-highest chance creator (3) and the joint top assist-holder (1).

To be the team’s best midfielder when you’re playing alongside Luka Modrić and Marcelo Brozović is no picnic but Mateo Kovačić, in this tournament, has been outrightly breathtaking.

With an accumulated xA of 1.04, Kovačić is the fourth most creative player in the tournament, based on this criterion. Also, having created the most chances (5) and won the most tackles (6) for his team alongside boasting a passing accuracy of 90%, it is fair to say that he’s not only the game-changer but also the Vatreni’s prime game-maker. They will be looking towards the Chelsea man for inspiration.

While Croatia have truly world-class players in their ranks who have served them brilliantly in the past, it is also true that a majority of their best performers are in the latter stages of their career. The energy, the fastidiousness, and the desire of Moriyasu’s Japan might trump Croatia’s wisdom.

FootTheBall predicts that Japan will stick to their magical number 2-1 and reach the last eight for the first time in a men’s FIFA World Cup.