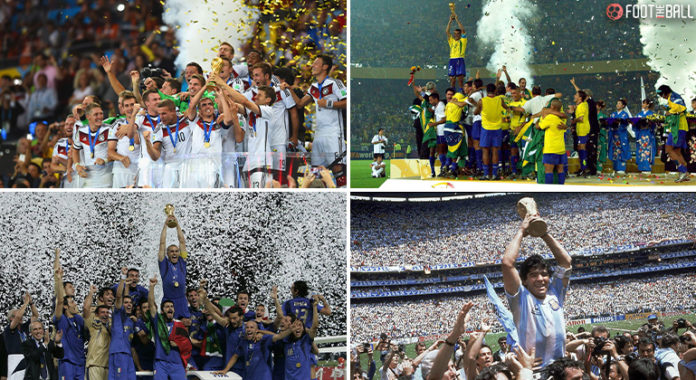 The 2022 FIFA World Cup is in its last stages. Argentina officially became the first team to enter the final after defeating Croatia 3-0. Following this, they have entered their sixth World Cup final. And if they win the final, they would also become the third-most successful nation in history with three World Cup titles.

Ever since the start of the World Cup in 1930, the tournament has been fierce in competition, and a team needs to be at their best to make a deep run into the tournament. However, the World Cup has been dominated by a select few teams. In fact, in the last 21 editions, only 13 teams have reached the final of a World Cup. However, this could change to 14 if Morocco manage to pull off another upset by beating France in the second semi-final.

So, here are the teams that have made the most appearances in a FIFA World Cup final.

The four-time World Cup champions have been one of the most consistent sides in World Cup history, even after their two back-to-back group stage eliminations. Die Mannschaft have reached the final a record eight times, the most by any team.

Their first came in 1954 when they defeated Hungary’s Mighty Magyars to win their first World Cup. Their next final appearance came in the 1966 World Cup, where England defeated them riding on a Geoff Hurst hat trick. However, the next time the Germans went into the final, they would not be denied the trophy as they defeated the legendary Total Football side of the Netherlands led by the charismatic Johan Cruyff.

Their next three World Cup final appearances came after another between 1982-1990. They first came against Italy, possibly the most defensive side to win a World Cup. Four years later, they would again falter at the last hurdle losing to a Diego Maradona-inspired Argentina. They would get third time lucky, though, as they exacted revenge from Argentina in the next World Cup, defeating them 1-0 courtesy of an Andreas Brehme penalty.

Germany would reach their successive World Cup final 12 years later in the first tournament edition to be held in Asia. After that, however, their dream of winning a fourth title was crushed by Ronaldo-led Brazil. Nevertheless, the late 2000s saw the emergence of a golden generation of players such as Thomas Muller, Mario Gotze, Mesut Ozil, Toni Kroos, Sami Khedira, Manuel Neuer, Jerome Boateng, and Matt Hummels.

And this group of players delivered Germany their fourth World Cup title, which included a 7-1 demolition of Brazil and a 1-0 win over Lionel Messi’s Argentina in the final.

In the 1950 World Cup, FIFA put the last four semi-finalists in a single round-robin format group. So there was no designated final; and , if we count that all four teams in a way never played the final, then Brazil have reached this stage six times.

In 1950 , they lost their last group game to Uruguay in what is now called Maracanazo. It was one of the biggest upsets in football and is viewed as a great tragedy. However, from the ruins of Maracanazo rose a team so great that they made Brazil the footballing superpower it is today.

In fact, Brazil were so ruthless after the 1950 World Cup that they won their four next World Cup final. Their first two came in back-to-back World Cups when the world witnessed the rise of Pele. After winning the World Cup in 1958, and 1962 Brazil faltered severely in 1966. Four years later, the Selecao returned with what many called the greatest World Cup team to win their third title.

The nation would have to wait for 24 years before they would again reach the final stage. However, this was the start of a journey that took them to three consecutive World Cup finals. The first came against Italy, which they won on penalties.

They were again one step away from the trophy four years later but lost to France’s golden generation 3-0. However, in one last hurrah, the golden generation won their fifth World Cup title in 2002. Since then, the team has never reached the final.

Since winning the World Cup in 2006, Italy have been eliminated in group stages twice and have failed to qualify for the last two World Cups. This is a historic fall for the second-most successful team in World Cup history. Italy’s first two final appearances came in 1934 and 1938, both of which were won by the team.

In 1950, Italy should have arrived with the best team in the world at that time. However, a year before, the majority of the players from Torino, Italy’s most successful club, which was five-time league champions, died in the Superga air disaster.

This was such a blow for the Italians that it took them another 20 years to reach the final. However, facing the brilliant Brazilians, the Gli Azzurri were left chasing shadows as they succumbed to a 4-1 loss.

Their next World Cup appearance came in 1982 in far-from-ideal circumstances. Two years before, several players had been implicated in a match-fixing scandal called Totonero. The backlash was so huge that their star striker Paolo Rossi was also dismissed despite being innocent.

However, the Italian would produce one of the best defensive displays ever seen in World Cup history to win their third World Cup title. In 1994, the team lost on penalties to Brazil as Franco Baresi, Daniele Massaro, and star forward Roberto Baggio all missed their spot-kicks.

Their last World Cup triumph came in 2006 when Italy rode on their famed defensive game and inspired Gianluigi Buffon in goal.

4 – Italy won the most recent of their four World Cup titles in 2006; only Brazil (5) have lifted the famous trophy on more occasions than the Italians. Azzurri. #OptaWCYears pic.twitter.com/UWxvfWAJ1i

Lionel Messi has been the star of the show for Argentina in the 2022 FIFA World Cup. His mesmerising performances, including five goals and three assists, have propelled the Albicelestes into their sixth World Cup final.

They added their second eight years later as Diego Maradona playing some of the best football ever seen, took them to the title en route beating England, Belgium and Germany. Four years later, they lost to their 1986 opponents as the Germans won the final 1-0.

Their next final appearance would also be spoiled by the Germans, who defeated them 1-0 courtesy of a Mario Gotze extreme time goal. The Germans had eliminated the nation in the third straight World Cup.

And for the sixth time in their history, Argentina are in the final of the 2022 FIFA World Cup and will face the winner of Morocco and France in the final.