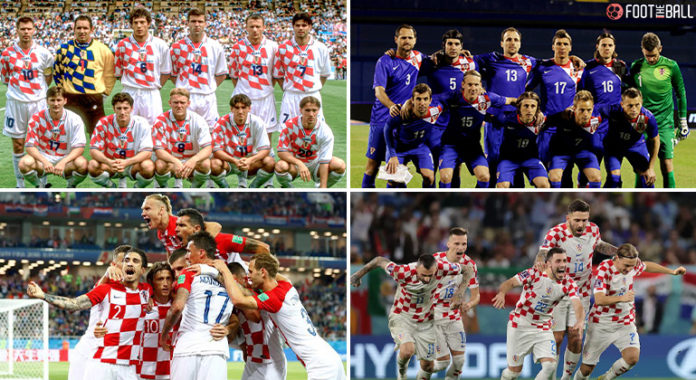 October 17, 1990. It is a date that holds enormous significance for Croatian football as it was the day the country played their first match as an independent country against the United States. Their first match as a FIFA member came ten months later against Australia.

And a little more than 30 years later, the east European nation did something no one thought was possible. The Vatreni, in a short span of history, have become the newest footballing powerhouse in football. Since 1998, Croatia have reached the semi-final three times, more than England and Spain, and on level with Brazil and England. Only France and Germany have reached the semi-finals more often.

This is an impressive achievement for a nation that just came into existence in 1991 after declaring independence from Yugoslavia. With a population of under four million, the country is among the top underdog teams that have punched way above their weight.

And the trend has continued in the 2022 FIFA World Cup as the Croatians have reached consecutive semi-finals and, during this time, have defeated top teams such as Germany, England, and Brazil.

Under manager Zlatko Dalic the Croatians have become giants killers using their grit and determination to drag top teams through 120 minutes before finally slaughtering them in penalties. The team are yet to lose a single penalty shootout in World Cup history.

So, here’s a look at Croatia’s incredible journey from minnows to footballing powerhouses.

3 – Croatia will play the 3rd World Cup semi-final in their history, after 1998 and 2018. Since their first appearance in the tournament in 1998, only Germany (4) have been in the semi-finals more often (France currently at 3). Resilience. #CROBRA pic.twitter.com/sJ3EBlarGX

Croatia’s first dalliance at a tournament came in the Euro 1996 when they were drawn into a group comprising Portugal, Turkey and Denmark. Any team playing their first tournament would have had nerves, but if Croatia had them, they didn’t show them as they defeated Turkey and Denmark to qualify for the quarter-finals, where Germany knocked them out.

However, no one could have expected the team’s incredible run at the tournament. After finishing second in the group behind Argentina, the Croatians defeated Romania to set up a quarter-finals clash with Germany.

What followed next would become a watershed moment. At the Stade de Gerland in Lyon, Croatia scored three unanswered goals to script one of the tournament’s biggest upsets. Facing hosts France in the semi-final, Croatia took the lead through Suker, but a brace from Lilian Thuram would eliminate the first-timers.

However, the Croatian team had already become legends and ended the tournament on a high after beating the Netherlands in the third-place playoff.

This was one of the fastest rise in football the world had seen, and the fall was just as quick. As a result, Croatia failed to qualify for Euro 2000 and were eliminated in the 2002 and 2006 World Cup group stage.

After an impressive show at Euro 2008, they failed to qualify for the 2010 World Cup and were eliminated at the group stages four years later in Brazil.

However, during this time, the Croatians had a group of players plying their trade in top European leagues.

And the first glimpses of their performance came in Euro 2016, where they topped their group after beating defending champions Spain. However, they would lose in the round of 16 to eventual winners Portugal. The Croatian football federation was keen on ensuring that their second golden generation does not go to waste.

So, in 2017, Zlatko Dalic was appointed national team manager. The coach became famous after taking the UAE club to a league cup win and a run to the AFC Champions League final. And Dalic started his run brilliantly, taking Croatia to the 2018 World Cup after a playoff win over Greece.

Croatia were drawn into Group D with Argentina, Nigeria and Iceland. After starting their campaign in Nigeria with a 2-0 win, Croatia made head turns as they thrashed Argentina 3-0.

Dalic knew their golden generation was in its prime, and thus he devised a team that thoroughly used Croatia’s strengths and masked their weaknesses. As a result, they won two back-to-back penalty shootouts against Denmark and Russia, respectively.

And then came the semi-final. In the entire World Cup history, the underdogs have usually been eliminated in the semi-final stage. However, the Vatreni had other ideas as they again dragged England to extra time, where Mario Mandzukic’s goal gave them the win.

However, their dream of winning the title was ended by France in the final.

Croatia’s 2018 World Cup exploits were the stuff of legends. However, by the time of the 2022 Qatar World Cup, their squad had aged massively. And though Dalic introduced younger players, most of them did not offer the same quality. As a result, the team was expected to qualify for the knockout round, but nothing much was expected from them.

They finished second in the group behind Morocco, a team that, like Croatia in 2018, are having a dream run of their own. They repeated their 2018 trick in the knockouts by taking teams to penalties before beating them. And, like Danijel Subasic in 2018, the mantle of penalty-saving heroics has now been taken up by Dominik Livakovic.

Don't think it's an upset and shouldn't be called one. Croatia were finalists in 2018 and they are unbeaten in this tournament too. For once a golden generation of any country is trying to live up to expectations, don't take anything away from Modric or Croatia 🇭🇷♥️ #FIFAWorldCup

However, their best performance came against Brazil. The Selecao had one of the best squads recently, boasting the likes of Neymar, Vinicius Jr, Raphinha, Casemiro, Richarlison, Thiago Silva, Marquinhos, and Alisson.

So, by the time, Brazil turned up to face Croatia at the Education City Stadium, they were in their prime form. While Croatia managed to shut out Brazil for 90 minutes, they fell behind after one of the tournament’s best goals, scored by Neymar.

However, Croatia’s grit and determination were on show again as they equalised in the dying minutes of extra time. And then, as we have seen many times, Croatia prevailed, keeping their penalty shootout win record intact.

Croatia’s run of 2018 and 2022 has been centred around one man, and that is Luka Modric. The ageless wonder, the magician with the mop, has defied time with his game. The curved balls that seek a player with automated accuracy, the shots from the edge of the box, where it looks like the ball has a single aim in life, to nestle into the corner- Watching Luka Modric means watching everything that is technically right with the beautiful game.

The midfield star has been performing at the top level with Real Madrid, bringing his form to the national side. In 2018, Modric played the role of controller to perfection to help them reach the final. This helped him win the Golden Ball and later the Ballon d’Or that year.

However, Modric was 33 years old, and by the time Qatar arrived, he was well past his prime, but even then, he dug deep to find every ounce of strength and inspiration to lead Vatreni into the last four.

And if Croatia have to go one step beyond 2018, then Modric is the key to unlocking that achievement.

After two incredible back-to-back campaigns, Croatia proved they are among the footballing elite. And they have done it with a mix of players who are old and young talented and gritty, stubborn and resilient.

Whether they win the World Cup or not remains to be seen; however, one thing is sure, football has a new top dog, and it is here to stay.