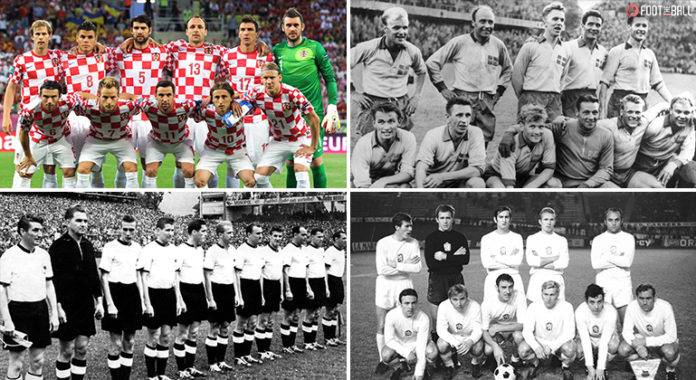 When nations from all corners of the footballing world come together for the sport’s most exalted carnival, narratives and stories, overflowing with raw passion and emotion, are composed for the ages.

In every World Cup, some teams punch above their weight in such an inspiring way that they are anointed the darlings of the cup. Neutrals love them, they become everyone’s second team, and people collectively wish them success and joy because that is exactly what they offer to everyone in return.

FootTheBall lists four underdogs who astonished the world and reached the finals of the men’s World Cup.

Half a year before the 2018 World Cup in Russia, Croatian football was in disarray. In the first round of qualification, they had drawn against the 66th-ranked Finland and dropped to the second position, putting their progression to the finals under threat.

Hours before the final qualifier, coach Ante Cacic was sacked. Midfield maestro Luka Modric thought the situation was “catastrophic”. The Vatreni eventually featured in the second round of qualification, defeating Greece to reach Russia.

Coming into the World Cup, not much heed was being given to Croatia’s chances. There were other usual suspects who were hogging the attention.

Things changed soon enough. The Croats stormed through the group stages, topping their group and defeating Argentina (3-0), Nigeria (2-0), and Iceland (2-1) in the process.

The Vatreni kicked out Denmark and Russia in the knockouts on penalties before winning against England in extra time to reach their first-ever final, besting their historic run till the semifinal in France 1998.

Croatia put on a fighting display in the final but the French were too good for the Croats. However, an inspired Luka Modric did win the Golden Ball award.

Post-World War II, West Germany was in flux and trying to find some identity in the early 1950s. FIFA hadn’t allowed the country to be even admitted to the World Cup in 1950.

Leading into the 1954 World Cup, their team of semi-professionals was somewhat an unknown quantity as West Germany hadn’t had much international exposure till then.

Slotted in a group with Hungary, Turkey, and South Korea, West Germany’s heavy loss to Hungary (8-3) meant that they had to beat Turkey twice, first in group stages and then in the playoffs to qualify, which they did.

After convincingly beating Yugoslovakia and Austria in the knockouts, the West Germans were confronted with the mean task of taking on Hungary – the Mighty Magyars – who were the clear favourites to lift their first world title.

They needed a miracle to stop Hungary’s train of destiny at the Wankdorf Stadium in Bern, Switzerland, and they got, what is today known as “The Miracle of Bern”, where they came back from 2-0 down to win 3-2.

After an intense match between the Dutch and Argentine,

Messi and co. came out on top on penalties@SumonChakraVIEW here with all the post-match celebrations#LiveFromQatar #FIFAWorldCup pic.twitter.com/MHVh7DzQp5

Czechoslovakia, a country that got dissolved into the Czech Republic and Slovakia in 1992, had reached the finals of a men’s World Cup twice, in 1934 and 1962.

While they lost an extremely tight encounter in 1934 to Italy, Czechoslovakia had found no joy in the first three World Cups post-war, failing to qualify in 1950 and crashing it out in the group stages in 1954 and 1958.

Placed alongside holders Brazil and fairly competitive Mexico and Spain, a daunting assignment was waiting for the Czechoslovakians at the 1962 World Cup in Chile. However, luck was on their side as despite losing heavily to Mexico, they sneaked out of the group courtesy of an impressive 0-0 draw versus Brazil and a sticky 1-0 win over Spain.

Having defeated Hungary in the quarterfinals and Yugoslavia in the last four, their dream run was cut short by a world-class Brazil side in the final.

But it surely placed the Czechoslovakian class of 1962 in the annals of World Cup legends.

Under the stewardship of the Englishman George Raynor, Sweden weren’t expected to amaze even if the World Cup was happening in their backyard. However, they started strongly by topping their group.

In the quarterfinal versus the Soviet Union, albeit the odds were against the hosts, they comfortably won 2-0 before strolling 3-1 over West Germany in the last four.

They lost 5-2 in the final to a special Brazil side, wherein the 17-year-old Pelé was announcing his arrival. It is said that at the end of the Brazilian masterclass, even the Swedish fans present at the Råsunda Stadium were in awe of their rivals on the day and openly applauded their genius.