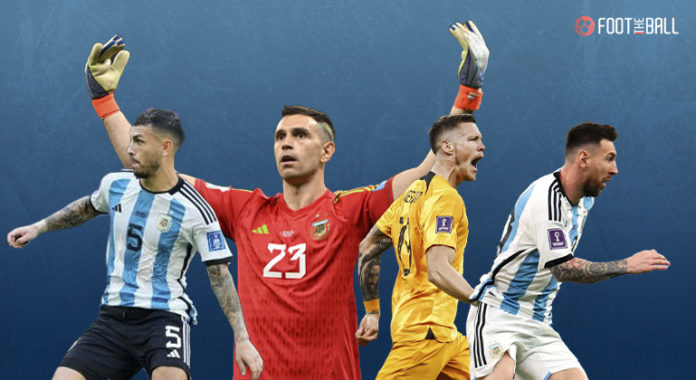 Argentina wanted to do it for their captain, the Netherlands for their coach. Mover and shakers of the game, football’s brutality – and how brutal! – was going to kill the dear dreams of one of them at Lusail Iconic Stadium this Friday night.

In the end, heartbreak knocked on Louis van Gaal’s door, as Argentina beat the Netherlands in a bloodbath that finished 4-3 on penalties, with the 2-2 stalemate weathering the duration of extra time.

Argentina’s Nahuel Molina was gracefully assisted by Lionel Messi to open the scoring in the 35th minute with a poked finish. Provider-turned-scorer, Messi doubled La Albiceleste’s lead from the spot in the second half, as Argentina looked set to go through to the semifinals with relative ease.

The Dutch, however, had plans to cause chaos and top-end drama, as they launched a comeback and took the game to extra time, and eventually penalties. Substitute Wout Weghorst initiated and completed the Oranje recovery as he bagged a brace, with his second goal coming with practically the last play of normal time.

Continuing from where they left off eight years earlier, the dull non-dance of staying still in a high-stake World Cup match between van Gaal’s Netherlands and Messi-led Argentina was underway. Thirty minutes in, the Dutch had made their hot chocolate, got their book, and settled on their sofa. They were dictating the tempo with relative comfort in the first quarter.

All was going to plan; Frenkie de Jong and Nathan Aké were successfully doubling up on Messi, La Albiceleste’s greatest threat. Barring a non-significant moment or two, Messi hadn’t made any mark. Until he carved out his moment of magic.

In the 35th minute, receiving the ball in his attacking third, he trickled away from his markers and, using his behind-the-head vision, played a reverse ball into Molina’s path, erasing an army of orange shirts with it on the right side of the field, as the right back Molina puttered it home. The roof of Lusail Stadium went off with the colour of the sound, for all its impossibility, being blue and white.

Later, in the second half, with more spaces to attack, Messi put on a show for everyone watching, as the crowd, as if watching a tennis match, gasped and sighed every time he touched the ball. Eventually, he was given his goal which he slotted home from the penalty spot in the 73rd minute, and equalled Gabriel Batistuta as Argentina’s leading goalscorer in World Cups with 10 goals.

WHAT A MAGNIFICENT PASS BY LIONEL MESSI 👑🇦🇷 pic.twitter.com/hRtxmrwtMX

Total Longball, an ensuing bloodbath, and an audacious comeback

Lionel Scaloni changed Argentina’s system to incorporate the trio of Christian Romero, Lisandro Martínez, and Nicolas Otamendi, and it was working like a charm until the 83rd minute. The entire Argentine outfit, from back to front, showed tremendous discipline and vigour in pressing as a unit and clearing their lines.

A testament to Argentina’s resolve was that the stubbornness of van Gaal had softened as he was forced to change his system and bring on his imposing target men.

After the Oranje had switched to Total Longball and once Rodrigo de Paul and Romero were recalled, the till-now harmless Dutch found impetus and opened the floodgates.

With Oranje’s first shot on target in the 83rd minute, Weghorst scored and injected life into the game.

What followed was a cluster of collisions, clashes of worked-up masculinities, body checks, and emotional displays of aggression, with Leandro Paredes unnecessarily lacing the ball into the Dutch dugout winning the Oscar.

The slow, dull nothingness of the first three-quarters of the game escalated at a rapid pace. The Netherlands fed off this mayhem while Argentina lost their cool and control, and shot themselves in the foot.

Amidst the fury of tempers and an array of anger consuming everyone involved, the Netherlands produced a moment of sheer ingenuity and audacity to equalise from essentially the last play of the game, and practically shush the sea of blue and white in the Lusail Stadium which was already celebrating the Argentine victory.

Teun Koopmeiners, standing just outside the opposition box, behind a free kick in the 10th extra minute of the original 90, slipped a reverse ball into Weghorst, who bullied his marker and intelligently rolled the ball in the Argentine net to make it 2-2.

To give a measure of how mad the madness was in this ‘Battle of Lusail’, Mateu Lahoz dished out 18 yellow cards, breaking the record of 16 which was set during Portugal vs Netherlands game in the 2006 World Cup.

Another win by Fine Margins

This one taught us not to panic when crisis hit

That's what the Netherlands did when down 2-0

They did not panic, they got creative instead, which was key to their comeback and a magical underdog tactic pic.twitter.com/Exqnbsg21b

A betrayal in extra time and Martinez penalty heroics

After all the players in both the teams at different points of time had lost their heads in the en masse release of testosterone, Argentina and Netherlands seemingly came to a mutual agreement to cool down in extra time and proceed to the toxicity of the penalty shootout.

However, the arrival of Ángel Di María in the second half of extra time inspired La Albiceleste. Utilising the last drops of his adrenaline, Enzo Fernández, with the help of Lautaro and Di Maria, directed Argentina’s last push. Betrayed Dutch tried to plot counterattacks of their own, and the game became stretched in the dying minutes of the extra time.

Noppert ended up making two decent saves before Enzo the Instigator hit the post with his strike from distance in the last minute.

In the penalty shootout, given the bloodbath that transpired in the second half of the game, it was befitting that the daddy of getting-in-your-face and showing aggression, Emiliano Martínez saved twice and produced the heroics that kept the dream of Argentina and Messi, son of Rosario, alive.