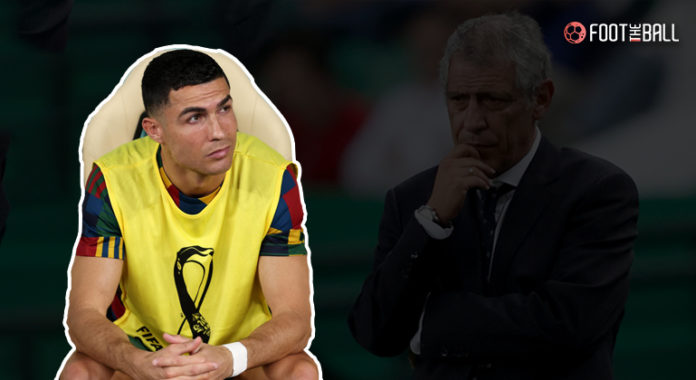 Sung in Tom Waits’ crude, rough, sorrowful, almost anti-melodious voice, over melancholic background music, these are the lyrics of a song called “Time”. It’s also a song that would sync suitably in a slow-mo montage, made from all those shots of Cristiano Ronaldo sitting on the Portugal bench in the substitute’s bib.

In most ways, the question of whether Portugal (or even his former club, Manchester United) is better off without Ronaldo is bluntly a question of time. Amongst the parties involved, there seems to be a discord about the passing of time and its consequences. While Ronaldo wants to believe that he’s still the same player he was a few seasons ago, Manchester United realised after Erik ten Hag’s arrival as did Portugal recently that it’s not the case.

For a man who has scored 819 career goals, won 32 trophies, and has the tag of being one of the greatest to play the game, it is understandable why he would be having such a difficult time dealing with his sporting downfall.

There’s also the added element of attributes he weaponised into his on-field strength – his hyper-masculinity, audacity, and narcissistic self-belief – coming to bite him back in a strange way as he tries to continually resist the reality of his own footballing mortality.

These things point to why he poured his heart to Piers Morgan and threw all of his teammates and managers, previous or current, under the bus. Or why the rate of him throwing his hands in frustration on the field at his teammates, managers, someone, anyone is ever-increasing.

It’s not to say that Ronaldo has lost all his value as a player; his finishing, ball-striking, and poacher instincts are still fantastic. And if anything, his longevity and physical fitness are commendable. With all his experience and clutchness, he can still offer impactful inputs from the bench. But his days of being an overall positive for his team are beyond him.

Guess it's time for Ronaldo to accept that if he wants the World Cup, he lets the young guns bring it for him 💯#Portugal #WorldCup2022 #Qatar2022 pic.twitter.com/FRdRTWmZKg

Are Portugal better without Ronaldo?

If we return to – say – 2016, when Ronaldo was sharp as ever, piling up goals and numbers alien to everyone other than Lionel Messi, his teams, Real Madrid and Portugal, were ready to model themselves around his strengths because they understood the value of doing so. For instance, Zinedine Zidane wanted the then-sacrificial Karim Benzema to laboriously cover ground and create for the Portuguese because he knew that this would bring heaps of success, as it did.

At that time, while Ronaldo was at the peak of his powers, Portugal was confronting a relative absence of world-class talents in most positions, and were heavily dependent on their number 7.

But this is not the Portugal of 2016. Neither is he the Ronaldo of 2016. The tables have turned. Portugal is absolutely and utterly brimming with exciting potential and the 37-year-old Ronaldo is not what he wishes he was.

A longstanding criticism of Fernando Santos has been that he withholds the Portugal squad from actualising its attacking potential. Similar to Gareth Southgate, Santos stays deeply loyal to his set of players and is very cautious about reeling in changes even if that would usher in a more fluid brand of football.

However, to be fair to Ronaldo, in most matches of this World Cup, he’s not really been a liability to his team. Although he hasn’t scored any goals from open play, as the central figure in Portugal’s attack, he’s held the ball well and attempted to stay involved in the game.

But at the same time, his colossal presence means, consciously or unconsciously, Portugal’s gameplay has to be organised around Ronaldo, and that is not ideal. In many ways, it limits other attacking avenues and possibilities for the team, even though they presently possess the potential for those in abundance.

Portugal fans can also see these flaws and demand more from their team. Recently, A Bola, a Portuguese newspaper, conducted a poll and found that 70% of the surveyed fans were in favour of dropping Ronaldo against Switzerland.

Their cries were heard and in one of his boldest decisions, Santos’ replaced Ronaldo, after a streak of consecutive 31 starts in major tournaments, with the 21-year-old striker Gonçalo Ramos. How the night played out? Dynamism and liquidity flowed as everyone witnessed in awe.

Ramos became the first male World Cup debutant since 2002 to net a treble. As if fishes returning to the water, João Félix, Bruno Fernandes, and Bernado Silva felt liberated and caused mayhem from the middle with a dynamic forward up the field to pass to. Previously-doubters saw light and Portugal’s claim to the throne gained some serious urgency. Portugal showed the world glimmers of what they could be if the handbrake is released.

Santos, who was unimpressed with Ronaldo’s reaction to being substituted, explained that his decision was guided by tactics. “We wanted a team that played with a lot of fluidity,” he explained. “Cristiano is more fixed, he stays in a more determined role towards the box. Gonçalo has different characteristics: he is very dynamic and that’s what he ended up showing us.”

Going forward, the question remains if Santos will have the courage to keep his captain out of the starting XI as the stakes get higher with each passing game or will the 37-year-old return.

If Ronaldo does return, who knows, maybe he will muster some magic and, with his sheer will, produce a last dance of greatness but, looking at the evidence and situation in front of us, any rational and logical analysis would harshly point against it.