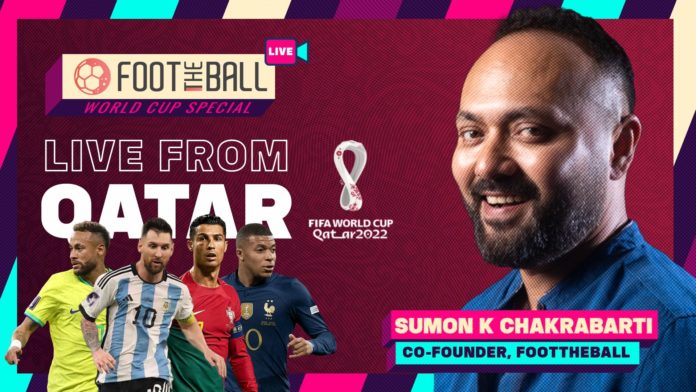 32 teams. Out of which only 8 remain, and the other 24 have their dreams crashed after failing to beat their respective opponents. It has been an action-packed 2022 FIFA World Cup so far, and expect the quarter-finals to deliver the same. FootTheBall are here with all the exclusive coverage on the FIFA World Cup 2022 at Qatar and it doesn’t stop here!

Argentina, Netherlands, Brazil, Croatia, England, France, Portugal, and Morocco are the final eight teams who have moved one step closer to their road to victory in Qatar. Speaking of which, Morocco have been the dark horse of the tournament after beating Spain 3-0 on penalties and recording the first upset in the knockout rounds.

The last eight starts with the Samba boys vs Croatia – the runners-up in the 2018 FIFA World Cup. The beautiful game or Joga Bonito as they say it in those parts, has been a part of Brazil’s rich history. The match against Croatia will be a tough test for the Selecaos, but Tite’s men have enough gas in the tank to overpower Modric and co.

The most anticipated round of fixtures is here,

And FootTheBall will be covering it LIVE from QATAR!

Next up after that is the tie of the round. Messi’s Argentina take on 3-time World Cup runners-up, Netherlands. The Dutch have surprisingly never won the World Cup even though they produced some of football’s most talented players. Louis Van Gaal is a master when it comes to the international stage and Lionel Scaloni and his men will have to be on their toes to get through this.

The pick of the bunch is undoubtedly England vs France in the quarter-finals. Gareth Southgate’s boys are one of the favourites of the tournament and the broader opinion is that ‘It’s Coming Home’. Defending World Champions on the other hand have broken the recent curse of exiting the group stages. France’s Kylian Mbappe is the tournament’s top scorer so far with 5 goals and is the ultimate test for the Three Lions.

Lastly, the surprise package of the tournament – Morocco, will be facing Ronaldo’s Portugal. The legend of the game hasn’t played a huge role in Portugal’s run so far, but is no doubt a big presence in the dressing room. Fernando Santos’ men will have their work cut out who face a resilient Moroccon side who are yet to concede a goal in 4 matches(except for that one own-goal).

France will look to clinch consecutive World Cup after they eased their way into the final after beating Morocco💪@SumonChakraVIEW shows us how fan reacts to France's win🎉#francemaroc #FRAMAR #Qatar2022 pic.twitter.com/rwaX3EtYR0

While these 2 look to get better of each other, these traditional neighbours have some fierce as well as traditional history between them. And this is clearly shown with the hostile and chaotic atmosphere just outside the stadium just before the kickoff.

It’s semi-final 2 at the Al Bayt stadium between France and Morocco. The rich history among both set of fans make this encounter all the more interesting. Morocco are already the first African side to reach the semi-finals of a FIFA World Cup and in an event, if they go past defending champions France, they’ll also be the first to reach the finals.

France on the other hand will look to become only the third country to retain their World Cup crown after Italy and Brazil. Standing in their way are the only side to concede a goal in the tournament and Mbappe and co. will have their work cut out if they are to have a chance of playing in the 2022 World Cup final.

France will look to clinch consecutive World Cup after they eased their way into the final after beating Morocco💪@SumonChakraVIEW shows us how fan reacts to France's win🎉#francemaroc #FRAMAR #Qatar2022 pic.twitter.com/rwaX3EtYR0

It’s a wrap at the Lusail stadium in Qatar, after a stellar performance from Argentina’s little magician puts an end to Croatia’s World Cup dream.

Lionel Messi and co will face either Morocco or France in the final and Argentina fans would love to see their G.O.A.T win it all.

A last dance at the World Cup for both the legends. Will Luka Modric be able to go one better from their 2018 run? Or will Lionel Messi be able to spoil Croatia’s party?

Trains are buzzing here on the way to the Lusail stadium and Argentina fans can’t wait to get a glimpse of their hero. Chants have already begun and this might not be the last we see of this.

Even the trains in Qatar are lit & ready for the semi-final between Argentina & Croatia🎉@SumonChakraVIEW brings all the live action of the 1st semi-final directly from Lusail Stadium🙌#LivefromQatar #CroatiaArgentina #Argentina pic.twitter.com/rnMmc8NfIb

If there is one thing football fans all over the globe want, it’s Lionel Messi winning the World Cup. The Argentine has been in scintillating form this World Cup 2022 with 3 goals and a couple of assists already to his name.

While Croatia are a much sterner test to Argentina’s resolve, Messi might prove to be the differential and FootTheBall covers fans’ reaction to their opinion on it.

France are through to the semi-finals after a breathtaking and hard-fought performance from The Three Lions. Giroud gave Les Bleus the lead again, but soon after England and Harry Kane were awarded a penalty. Unfortunately for Gareth Southgate and his men, their skipper blazed one over the bar, which allowed Deschamps and co. through to the next round where they face the surprise package of the tournament – Morocco.

Aurelien Tchouameni was quick to pounce on the half chance against a lose England midfield and ended up scoring a stunner. Harry Kane then restored parity with scoring from the spot and making it 1-1.

England were behind after that Aurélien Tchouaméni stunner.

But Harry Kane made no mistake from the spot for England.

Fans in the stadium made their support known for the Three Lions along with @SumonChakraVIEW !#LetsQatar #Qatar2022 pic.twitter.com/uhUkZPeB2L

Irrespective of whether it’s coming home or not, England have proved their mettle so far in the FIFA World Cup 2022. And both sets of fans are eager to get things underway. FootTheBall with all the action, straight from Qatar.

It’s day 2 of the quarter-finals and two neighbours clash with each other. Morocco take on Portugal and the early big new is that Cristiano Ronaldo is once again on the bench. Following the Portuguese legend, Cancelo is also left out from the starting 11 which has left many fans in shock.

The dream is alive for the little boy from Rosario whose side kept their cool to win on penalties against the Netherlands. It was another day where a goalkeeper was the hero for his side as Argentinian shot-topper Emiliano Martinez saved two crucial penalties to set the Argentinians for the win. And the dream for that elusive Wold Cup title remains alive for Lionel Messi, who will now face the determined Croatians in the semi-final.

Just as it looked like Argentina were running away with the match into the semi-finals, the Dutch came back, scoring two goals in the last 20 minutes of the game. Both of the gaols came from Besiktas striker Wout Weghorst.

First, he scored in the 83rd minute as he got his head to the end of a cross. However, his second came with almost the final kick of the game. The Dutch had won a free kick. And Steven Berghuis executed the perfect short free-kick, which found its way to Weghorst, who kept his cool and scored past Emiliano Martínez to tie the match.

It's heartbreak for the Argentine fans, after the Netherlands equalise in the 100th minute!@SumonChakraVIEW on how the stadium has reacted to this LATE LATE equaliser.#LiveFromQatar #NEDARG #QatarWorldCup2022 pic.twitter.com/1cxdmyitYf

After assisting one goal, Lionel Messi got on the scoresheet himself with a penalty. It all started when the trailing lead of Denzel Dumfries brought Marcos Acuna down inside the box. The referee Antonio Mateu Lahoz pointed straight to the spot, and Messi conjured a perfect shot in the corner, which left Dutch goalkeeper Andries Noppert rooted to the spot.

With almost half an hour gone in the match, the match was getting dull. But the little magician had other plans. What a sublime pass that was, and what a moment to record this.

When Messi touches the ball, you know it's magic!

Wait for it 'cause MAGIC DID HAPPEN 😭@SumonChakraVIEW will show it right here 👇😍#ARG #Messi #LetsQatar #Qatar2022 pic.twitter.com/vp5cIB29hS

There’s something about Dutch fans. They never back down and know what their team can produce on a given night. This Holland fan, who was interviewed by FootTheBall, also exhibits the same.

If you think that visiting the stadium is all it is there to do while watching a match from inside the stadium, you’re wrong! Argentina fans here have backed this statement, where they have been seen rocking the local trains.

Even before the latter fixture between Argentina and Netherlands has begun, its getting heated among both sets of fans.

This fixture is living up to its hype and the fans can’t wait to get a glimpse of their nation’s star performers.

More of this coming up here. STAY TUNED!