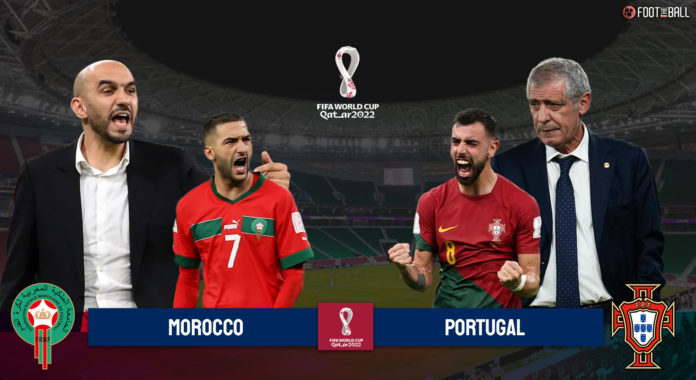 History-making Morocco will meet the recently-liberated Portugal in the quarterfinals of the men’s FIFA World Cup at Al Thumama Stadium on Saturday, in what will be the third encounter in World Cups between the two countries.

To become the first North African to reach the last eight of the men’s FIFA World Cup, Walid Regragui’s side valiantly endured an extremely emotionally-charged encounter against Spain, given the latter’s colonial history in Morocco, defusing and deflating La Roja for 120 minutes before finishing them off 3-0 on penalties.

In that game, with 76% possession, 969 completed passes, and two times more touches of the ball than their opponents, Spain tried to besiege Morocco’s fortress. It was, however, to no avail, as the Atlas Lions consistently shooed away La Roja’s attempts, bombarding them with 26 successful tackles, 41 clearances, and 8 interceptions.

How Morocco have constructed a defensive dreamland, full of resilient and rigid organisation, has been one of the stories of this World Cup, and it is no wonder that the Atlas Lions have conceded the least amount of goals in this edition.

History is made 🇲🇦 The fourth African team to ever make it to the quarter finals. Bravo Morocco 👏🏿 pic.twitter.com/ciMb86D6uZ

What’s more, under Walid Regragui’s reign of seven matches, Morocco have kept 6 clean sheets and are yet to concede a goal scored via the foot/head/body of an opposing player.

In their quest to be the first African team to reach the semifinals of the men’s World Cup, there is not much doubt that the Atlas Lions will stay deep, lock up their treasury, and aim to hurt Portugal on the break via wide positions.

In contrast to Morocco, who produced one of the best defensive performances of the World Cup to come through, Portugal exhibited arguably the most fluent uber-attacking display of the tournament in the 6-1 drubbing of Switzerland.

Fernandos Santos’ sweeping move to drop Cristiano Ronaldo worked wonders as his replacement, the 21-year-old, Gonçalo Ramos, became the first male to score a hattrick on his World Cup debut since 2002.

No Ronaldo. No Problem 😬

For quite some time now, Santos has been criticised for withholding his side, which is swelling with attacking potential, from playing a liberal and breezy style of football.  After Tuesday’s radiant performance, when Santos unfettered his prisoners and let Félix, Fernandes, and friends freely express themselves, Portugal’s claim to the throne has gathered some serious urgency.

A Seleção have never lost in the quarterfinals of a men’s World Cup, winning the tie in 1966 and 2006. Having picked up the pace at the right juncture of the competition, Santos’ side would look to stay on the happy side of history and extend their unbeaten run.

There are some concerns over the availability of the centre-back Nayef Aguerd, who appeared to be in a tearful condition when he was replaced with a muscular concern in the dying minutes of the normal time against Spain. However, some reports have relayed positive updates about the 26-year-old’s situation.

Midfielder Sofyan Amrabat also had to “take an injection to play” in the Round of 16 fixture versus Spain. There shouldn’t be any worries regarding his involvement.

Rumours suggesting that Ronaldo held talks with his manager on Wednesday, where he also threatened to leave the Portugal camp and return back were doing the rounds. The Portuguese Football Federation (FPF) however has staunchly quelled these reports.

It was well-known that Nuno Mendes had already been ruled out of the World Cup but reports have emerged stating that Danilo Pereira has been met with the same fate due to a rib injury.

If the game against Switzerland was Ramos’ announcement on the grand stage, it was also João Félix’s re-announcement on the same platform. The Golden Boy awardee, who used to dish hattricks in Europe as a teenager but got lost under the stewardship of Diego Simeone at Atletico Madrid, was found again in Qatar.

The 23-year-old painted the Round of 16 tie with his many colours of creativity. He ended up as the player with the most assists (2), most dribbles (2), and second-most progressive passes (4) in the match.

The fact that Portugal and Félix unleashed their inhibitions in the same game doesn’t seem to be a coincidence. New-look Portugal would want to see plenty more of the new-look Félix if they want to keep going deep in the tournament.

Sofyan Amrabat is the diesel for Morocco’s car. At the heart of the midfield, Amrabat runs the defensive set-up that has gotten so much joy for the north Africans. For instance, against Spain, he made the most tackles in his defensive third (4) and recovered the second-most balls for his team (9) while committing zero fouls and winning three.

In fact, throughout the tournament, Amrabat has made more recoveries than any of his teammates (33). Unsurprisingly, he’s run the most distance in a Moroccan shirt (48.1 km).

If Morocco wants to create more history, Amrabat needs to chart each and every grass blade of the pitch versus Portugal.

Sofyan Amrabat has been everywhere! WHAT A PERFORMANCE!!!!! 🔥

Morocco are riding a wave of momentum and will demonstrate far greater discipline and hindrance to Portugal than Switzerland. But unlike Spain, if Santos sticks with the newfound fluid system rather than bringing back Ronaldo in the starting XI, Portugal’s incisions will be more purposeful and threatening to Morocco’s goal.

FootTheBall predicts a 2-1 win for Portugal.