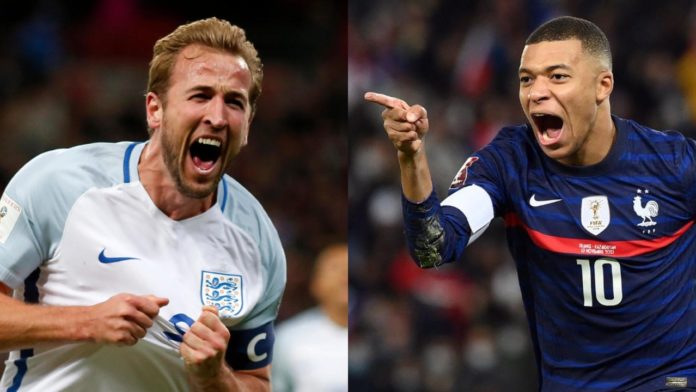 England’s crop of players that reached the 2018 FIFA World Cup semi-finals are now older, more mature, and in their prime. This has been reflected in their World Cup campaign so far. The Three Lions scored nine goals during the group stage, the most by any team. And, their form has not tapered off, as they put three past Senegal in the round of 16.

However, they now face their sternest test in France, and Gareth Southgate’s men will need to be at their best and some more if they are to see off France.

England vs France in the World Cup Quarter Finals 😍🍿 pic.twitter.com/yeHCljkkeq

On the other hand, France have been brilliant as they look to defend their title. Barring a loss to Tunisia, where Didier Descmpas practically rested his entire team, Les Bleus have been flawless. And leading the team is the incredible Kylian Mbappe, who has been in prime form and has been scoring goals and providing assists for fun.

In addition, other players like Olivier Giroud, Ousmane Dembele and Theo Hernandez have also stepped up to the plate. However, captain Hugo Lloris has failed to keep a single clean sheet till now, which shows that France’s defence can be breached, which will be music to the ears of England’s attackers.

France’s midfield duo of Aurelien Tchouameni and Adrien Rabiot have been brilliant but don’t have the big stage experience. However, if they manage to perform against England, it will be a feather in their caps.

While any side usually misses players with injuries, England is without a player for an entirely different reason. Raheem Sterling is in England following a burglary at his house but will be back in Qatar before the match. Declan Rice also missed a day of training through illness but will be fit for the clash.

In addition, James Maddison has still not recovered from his injury, but Kalvin Phillips will make the bench for the clash.

Meanwhile, France have no injury concerns, but Kylian Mbappe missed a day of training due to ankle problems. However, he is back in training and will feature in the game. So, Didier Deschamps is expected to field an unchanged 11.

The only decision Deschamps needs to think about is who to start at right back, between Benjamin Pavard and Jules Kounde. The Bayern Munich man started the first match against Australia but has since been replaced by Kounde, and the Barcelona man is expected to keep his place on the team.

Kylian Mbappe Lottin. If France are to become the third team after Italy and Brazil to defend their FIFA World Cup title, then the 22-year-old is the key for the team. Mbappe is playing only his second World Cup but is already on nine goals and could be among the top goal-scorers of all time if he keeps up his form.

And his partner in scoring goals has been Olivier Giroud, and he is still going strong at 36 years. In the last match, he overtook Thierry Henry to become France; all-time top goal scorer.

250 – Kylian Mbappé’s second goal against Poland on Sunday was the 250th of his professional career (360th game), reaching this tally in 150 games fewer than Cristiano Ronaldo (510) and 19 games fewer than Lionel Messi (379). Statement. pic.twitter.com/77e6yGUKBN

Meanwhile, England are far more team-oriented and have a lot of game-changers on their team. Marcus Rashford and Bukayo Saka have three goals each. Meanwhile, Harry Kane and Phil Foden have been taking care of the creative department with a combined five assists. However, among all these men, Harry Kane is ‘the game changer’ for the Three Lions.

The Tottenham man is the most experienced attacker in the side and has already shown he can perform at the top level when he won the Golden Boot in the last World Cup.

Among all the favour quarter-final matches, the England vs France match is the one that will attract the most eyeballs. This is because England have history on their side as they have defeated France two times in the FIFA World Cup in 1966 and 1982, respectively.

However, France are currently one of the best in-form teams in the tournament. And while England have been in pristine form, France might be too good for them.

FootTheBall predicts a 2-1 win for France.