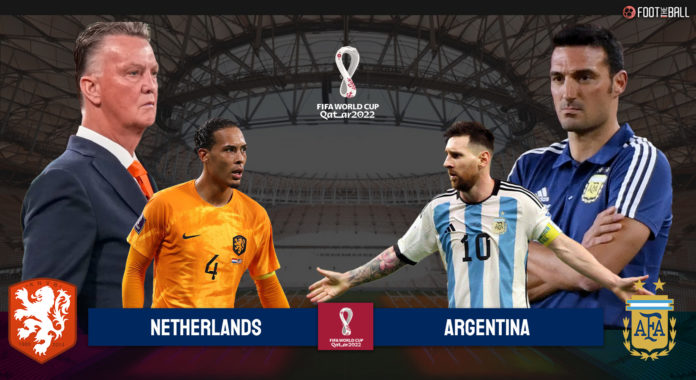 The sixth chapter of the epic Argentina and Netherlands World Cup rivalry will be written when these two footballing royalties take the field on Friday at the Lusail Iconic Stadium to compete for a spot in the last four of the men’s World Cup in Qatar.

Shellshocked by the Saudis on matchday one, Argentina’s tournament ever since has been one driven by reparation and atonement, in guidance of the Lionels, Messi and Scaloni. With his two moments of rejuvenation, the former has inspired his team when they were in dire need of it, and the latter has reeled in the necessary selection changes, such as the increased involvement of Julián Álvarez and Enzo Fernández, after the first game.

The latest stressor in Argentina’s hanging-by-the-edge campaign appeared against the Socceroos in the quarterfinals, after Fernández’s own goal in the 77th minute snatched La Albiceleste’s cushion, and sent them into a frenzy of fright for the remainder of the game. Things could have been worse if it was not for Lisandro Martínez’s last-ditch tackle.

Given the hype with which they arrived at the World Cup, in plain footballing terms, La Albiceleste have underperformed and failed to grace the levels that were expected of them. Barring the win against Poland, Scaloni’s side has merely done the bare minimum to push through to the next round.

This, however, can be a good thing in tournament football but only when coupled with a gradual improvement in the team’s performance as the competition heats up. And while Scaloni’s team haven’t capitulated under the burden of pressure, the time has now come for them to elevate their standard, or otherwise the Dutch would inevitably hand them their fourth defeat in their last five World Cup quarterfinals.

Meanwhile, the Netherlands, who haven’t lost a men’s World Cup quarterfinal since 1994, would enter this tie with the mission to avenge their 2014 semifinal on penalties to La Albiceleste.

Unremarkable but unscathed in the group stages, Louis van Gaal’s side levelled up in the Round of 16. To reach the fourth quarterfinal in their last five World Cup outings, the Oranje properly outsmarted and schooled the Yanks by setting up on the counter, letting the USA run themselves to the ground, and being economical and clinical in their passing and finishing. In the end, they deservingly triumphed 3-1.

Similar to what he did in the 2014 campaign, van Gaal’s priority has been shoring up the Dutch defence and establishing structures that enable quick transitions up the field. The loss of your Arjen Arjen Robbens and Robin van Persies hurts the system’s punch, but Memphis Depay, who has now regained his fitness, has stepped up to fill the void brilliantly and the rise of Cody Gakpo also helps. The fact that the Dutch haven’t lost in 19 games further endorses the manager’s defensive approach.

Also unbeaten in 11 men’s World Cup games since the 1-0 loss in extra time to Spain in the 2010 final, expect the Oranje to stick to their blueprint against Argentina but don’t expect them to be in any mood of getting either of their streaks broken on Friday in Al Daayen.

Right-back Jeremie Frimpong had suffered an ankle sprain just before the round of 16 match against the United States. Earlier, it was feared that he could be out for an extended spell but the Dutch medical team has cleared him and he is contention for a place in the starting line-up.

Inter Milan’s Stefan de Vrij has also returned to training after suffering a knock but is unlikely to start as van Gaal has kept his faith in Jurrien Timber, Virgil van Dijk and Nathan Ake.

There were reports of Rodrigo de Paul training alone due to a muscular injury but the midfielder reassured on his social media that “all is well”.

Scaloni will receive a big boost as Ángel Di María, who missed the quarterfinal owing to a thigh injury, is expected to return. Papu Gomez lingered off in the previous match but he’ll be in contention for a place in the XI.

Depay is the heartbeat of this Netherlands’ project, and because he was still recuperating from his injury in the group stages and wasn’t at the peak of his powers, his absence was heavily felt. Against the USA, however, he announced himself at the World Cup and that’s partly why it was Oranje’s most promising performance in this World Cup yet.

Cooly caressing the Netherlands’ crucial opener, and having the highest xG (0.6) and xA (0.4) in the match, Depay’s brilliance was wholly on song versus the Yanks.

With a tally of 43 goals, he is now also his country’s second-highest men’s goalscorer, with 24 of those coming in his last 30 outings to go with 10 assists in the same time period as well. The Netherlands’ would dearly wish for the Barcelona man to be there guiding light in the quarterfinal.

Rodrigo de Paul has been Argentina’s running machine, defensive destroyer, and protector-in-chief. With his frighteningly high work rate, he happily bears the responsibility of sorting out La Albiceleste’s dirty laundry.

1 – Rodrigo De Paul completed 137 passes in the match against Poland 🇵🇱 (145 passes attempted), the most by an Argentina 🇦🇷 player in a World Cup game since at least 1966. Confidence. pic.twitter.com/dEo0ggP8cV

Leading his team’s charts for interceptions (6), recoveries (29), blocks (7), touches in the middle third (271), sprints (230), defensive pressures applied (119), and line breaks completed (86), he’s been an ever-present, never-ending, box-to-box menace for Scaloni’s team, and they’ll need him to bring all his energy against the Oranje.

A game between relatively evenly-matched sides, this fixture has all the ingredients to be an immensely close affair where you do not have much to choose between. However, because La Albiceleste has more players who have stepped up on the biggest of occasions in the past, they just might nick it.