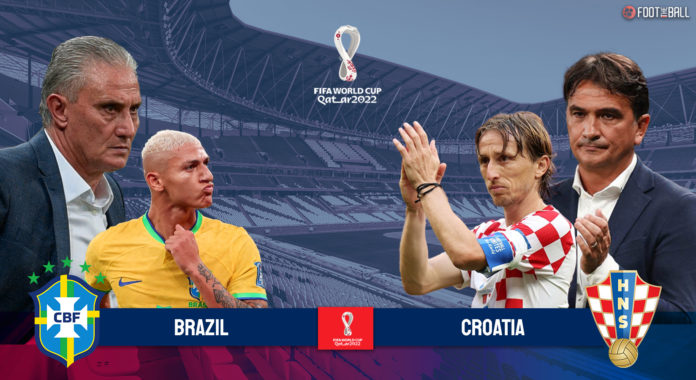 Tite’s balletic Brazil will face their litmus test when they square off against the steady and sturdy Croatia at Education City Stadium on Friday, in what will be the first quarterfinal of the men’s FIFA World Cup in Qatar.

If slight murmurs of scepticism surrounding the Selecao’s efficacy were starting to dawn after their last two group games, Brazil dazzled and danced them away in their stimulating performance against South Korea on Monday.

Every time the men’s World Cup is on, the five-time champions Brazil ritualistically enter the lifting-the-cup chat. But this time around, they are the bookkeeper’s favourites for good measure. Alongside France, they’ve been one of the most impressive and exciting teams attack-wise, although it can be argued that they are yet to face their toughest test.

However, unlike the last three tournaments, where the weight of the Selecao’s gilded footballing past and lofty aspirations for the future became too heavy to handle for the squad, throughout this tournament, they have coped well with the country’s expectations and displayed remarkable self-belief, assurance, and composure, as well as, happiness and dance moves!

For the eighth consecutive time, Brazil are in the last eight of the men’s FIFA World Cup, but this also has been the stage that has given them the most grief lately. The Seleção have bowed out in the quarterfinals thrice in the last four editions. What’s more, they’ve been booted out by European teams in the last four World Cups.

Perhaps, in their own entertaining but efficient, pleasurable but proficient manner, Tite’s team would want to set the record straight come Friday.

Meanwhile, standing on the other end of the spectrum is Croatia’s method and route of progression. Taking the sting of the game by making it bland, slow, and cagey has been their superbly successful mantra in tournament football. Since the Euros’ disappointment versus Spain in 2021, Croatia have only lost once in 20 games.

The Round of 16 victory against Japan was a classic example of the Croatian template. For the majority of the regular time action, it appeared like the Samurai Blue were running all over the Vatreni, who started the oldest playing XI in a men’s World Cup since France in the 2006 final against Italy.

Despite Japan’s constant incursions, the Croats refused to crack open. As the game progressed, they moulded with its tempo as per their demands and took the tie to extra time, where, using their rich know-how of the situation, they fully came into their own and eventually even exceeded Japan’s xG of 1.2.

If someone asked the Croatian manager, Zlatko Dalić, what his immediate dream is, he’d probably answer, ‘entering extra time against Brazil on Friday’. In 2018, barring the final, each of his team’s knockout ties needed the extra half hour. What’s more, Croatia have never lost a penalty shootout in the men’s World Cup (3W).

Going into the last eight, in pursuit of reaching the semi-finals for only the third time in their men’s World Cup history, Croatia will find validation of their approach in Swizterland’s sticky 0-1 loss to Brazil. Knowing that their technical quality is much higher than the Swiss, Dalić’s side would be confident that they can pull a Brazil-shaped rabbit out of their hat.

Croatia fullback Borna Sosa missed the Japan game due to illness, and his presence was dearly missed. While it is not confirmed, it is understood that he should be back in contention to start.

Josip Stanisic, another fullback, who is yet to feature for the Vatreni, is also struggling with a muscular issue.

Luckily Brazil do not have any suspensions to deal with. There is still no clarity if Alex Sandro, who’s nursing a hip issue since the Switzerland game would return or not.

In personal news for the now-ruled-out Gabriel Jesus, it is estimated that the Arsenal frontman might miss several months of action due to a knee injury.

The likes of Kylian Mbappé, Lionel Messi, and Cristiano Ronaldo, might have hogged most of the headlines, for reasons right or wrong, but the erstwhile-injured Neymar Jr reminded the world against South Korea that he also might not get another crack at a World Cup, so it’s best to leave a lasting imprint till you can.

Adjudged the player of the match in that fixture, the PSG forward slotted his spot-kick with some swagger. Neymar also boasts of the fourth-highest non-penalty xG (0.82) for his team despite missing two games through injury.

For the inspiration and meaning he offers to the Seleção, Brazil’s talisman will be crucial heading into the last eight.

🤙 With his injury behind him, Neymar wasted no time getting up to speed.

Ice cool from the spot, the focal point of Brazil’s devastating attack – he’s your #Budweiser Player of the Match.

It is likely that there will be many occasions when Brazil will throw heaps and bags of attacks at Croatia. For all the experienced heads in the Croatian team, the 20-year-old star Josko Gvardiol will need to put his body on the line and deliver a performance of his life, just like he did against Belgium in the group stages.

Like a modern centre-back, Gvardiol is equally essential for breaking lines and progressing the ball as he is for guarding Croatia’s goal.

For instance, in the Belgium match, he successfully completed 95% of his passes – the highest in his team – and also made the most number of clearances (9) and two crucial blocks.

He’ll need to display a similar level of security with and without the ball against the Seleção.

Croatia will look to bring the game to their comfort zone by slowing it down and taking it deep. However, considering the gap between Japan and Brazil’s attacking potential coupled with how leggy the Vatreni got in the latter stages of the Belgium game, Dalić’s side might successfully slow down Brazil’s rampant train but perhaps won’t be able to completely halt it.

FootTheBall predicts a 2-1 win for Brazil.