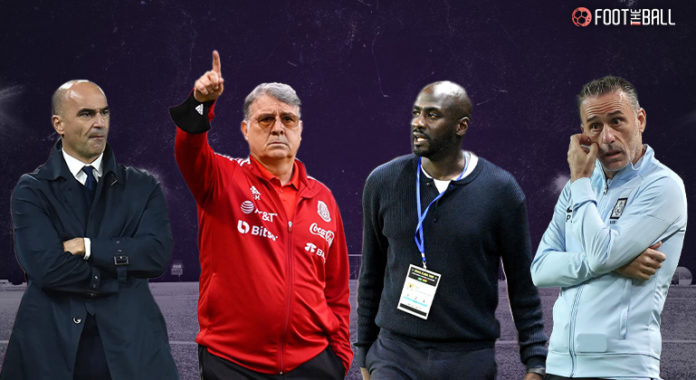 The FIFA World Cup is an event that comes every four years, which puts pressure on every international team to qualify for it. If one misses the bus, one will have to wait for a long time before you have a chance to come back. And if you do qualify, then your real test begins. Therefore, a good performance at the biggest tournament is significant for any manager.

However, we have seen some teams performing so poorly every World Cup that the man-in-charge has either resigned or been sacked. The 2022 FIFA World Cup is no different, and till now, four managers have faced the axe. Others like Germany’s Hansi Flick or Spain’s Luis Enrique may join them.

So, here is the list of managers who resigned or were sacked after their team’s poor performance in the 2022 FIFA World Cup.

The biggest casualty of this World Cup has been Brazilian manager Tite. Appointed in 2016, the Brazilian had moulded the national team into a ruthless attacking unit. Neymar, Vinicius Jr, Raphinha, Casemiro, Richarlison, Thiago Silva, Marquinhos, Lucas Paqueta, Ederson and Alisson were a part of the team that landed in Qatar.

The Selecao were one of the favourites to win the title and breezed their way through to the quarter-finals. However, their best version was displayed against South Korea, where the South Americans put four past their hapless rivals within 40 minutes of the first half.

So, the team was in their prime form when they faced Croatia at the Education City Stadium. However, the match turned out to be a slugfest as the Croatian expertly defended to take the game into extra time. Neymar then decided to take matters into his hand by scoring a sublime goal. Still, Croatia had other plans as they executed the perfect comeback by scoring an equaliser before knocking them out on penalties.

The loss was heavily criticised back in Brazil, and Tite tendered his resignation soon after the game.

Of the eight matches in the round of 16, the only shock result came in the game between Spain and Morocco. In an inspired display, the Moroccans held off Spain for 120 minutes before their goalkeeper Yassine Bounou produced two saves in the penalty shootout. This was Spain’s second straight round of 16 loss on penalty shootouts.

Spain were criticised for their underwhelming display. The loss was more surprising given Spain had started their campaign by defeating Costa Rica 7-0. After the first match, Spain drew with Germany and lost to Japan before Morocco knocked them out.

‘La Furia Roja’s lack of world-class strikers was evident as they failed to score from several clear-cut chances. On top of that, Enrique’s decision to leave veterans such as Sergio Ramos and Thiago out of the squad has also been criticised. As a result, there was speculation that Luis Enrique would leave his job, which he finally did on November 8, four years after being in charge of the national team.

Roberto Martinez was the most significant casualty till now at the World Cup before Luis Enrique’s and now Tite’s resignation No matter what he achieves in his career, his inability to win any trophy is with Belgium’s best generation. The Spaniard was appointed for the job after Belgium’s abysmal campaign in Euro 2016.

And in his first international tournament, Belgium reached the semi-final of the 2018 FIFA World Cup defeating teams such as England and Brazil. Unfortunately, they would lose to France in the semi-final, but they delivered some brilliant performances.

However, since then, Belgium have poorly faltered, losing to Italy in the 2020 Euro. The ultimate humiliation came in the current World Cup, where Belgium were eliminated in the group stage after losing to Morocco and drawing with Croatia. It was announced within minutes of Belgium’s exit that Martinez had left his post.

Roberto Martinez has announced that he will stop as national coach of the Belgian Red Devils. pic.twitter.com/l7EBqiOAeD

Mexico arrived at the World Cup, finishing second in the CONCACAF qualifying round. They were placed in Group C along with Argentina, Saudi Arabia and Poland. On paper, Mexico were the favourite to qualify alongside Argentina for the round of 16.

However, they started their campaign poorly, drawing 0-0 to Poland. This put Mexico in a precarious situation which was further worsened after they lost to Argentina. This meant that even if they won their last match against Saudi Arabia, they would still need results to go their way. However, they won their game against Saudi Arabia, and Poland lost to Argentina.

This put Poland and Mexico on the same points, but the former had a goal difference of 0, better than Mexico’s -1. So, by FIFA Tiebreaker rules, Poland qualified while Mexico were eliminated. And thus, by the barest of margin, Mexico were out, and Gerardo Martino lost his job.

🚨 𝗢𝗙𝗙𝗜𝗖𝗜𝗔𝗟! Gerardo Martino has left his position as coach of Mexico. 🇲🇽

His contract ended the moment the final whistle went.

Ghana were one of the better young sides when they arrived at the World Cup. The Black Stars had topped their World Cup qualification and were drawn in Group H with Portugal, Uruguay and South Korea. While the Africans may not have been favourites to qualify for the next round, they still had an impressive squad which boasted talented stars such as Ajax’s Mohammed Kudus.

The Africans were on three points after two matches. Despite that, they still had a chance to qualify, and their final game was against Uruguay, a team to which they lost in the 2010 FIFA World Cup in one of the most controversial moments in sports.

Ghana earned a penalty in the opening minutes, but just like Asamoah Gyan in 2010, Andre Ayew missed the spot-kick. They never recovered from the setback as the South Americans scored two goals to win the match. Manager Otto Addo, who was only appointed to the job before the World Cup, resigned.

Paulo Bento was appointed as South Korea’s manager after the 2018 FIFA World Cup. And the Portuguese has been brilliant at helping South Korea qualify for the World Cup, with just one loss in the qualifying phase.

Paulo Bento leaves South Korea, it’s over after taking them to the round of 16 the World Cup for the first time in 12 years. 🚨🇰🇷 #Qatar2022

They were drawn into a tough group in the World Cup with Portugal, Ghana and Uruguay. On paper, South Korea would not be able to qualify for the round of 16. However, Bento had made his side a well-drilled unit that was hard to beat. The Koreans were on one point after two matches, but a shock win over Portugal helped them qualify for the next round.

Their luck finally ran out when they met Brazil, who thrashed them 4-1, and Paulo Bento left his job as his contract had expired.