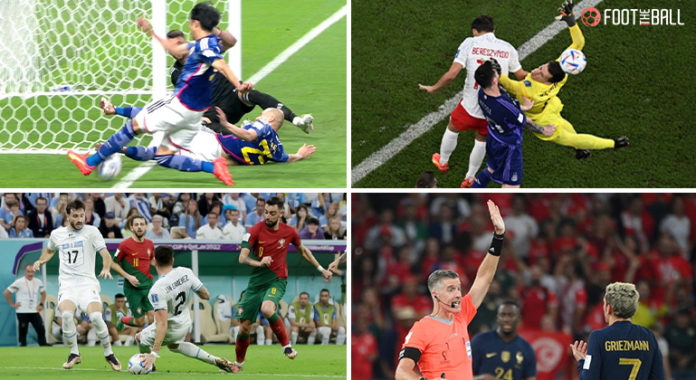 The 2022 FIFA World Cup in Qatar has been filled with controversies from the start. These scandals range from the infamous alcohol ban to the ban on LGBTQ flags and the inhumane working conditions of migrant workers. And the controversies have also found their way on the field, as several matches have been marred by decisions that have been called into question.

The decisions have not only come from referees on the pitch but also from the Video Assistant Referees (VAR) off it. In addition, the new semi-automated offside technology has also made headlines, with one player being deemed offside as his sleeves were found to be ahead of the last defender.

Some of these decisions significantly impacted not only the outcome of matches but also the fate of other teams who were not even playing in the match.

So, here are the worst refereeing and VAR decisions at the 2022 FIFA World Cup.

One day after Saudi Arabia’s shock win over Argentina, Japan pulled off another miracle by defeating four-time world champion Germany. They lost the next match to Costa Rica but qualified after defeating another giant in Spain. Japan won the game 2-1, but their second goal attracted massive controversy.

From the left side, Kaoru Mitoma put in a perfect ball converted into the goal by Ao Tanaka. However, initially, the referee called the goal off as it appeared that the ball had gone out of play before Motioma crossed it back to Tanaka. However, a check by the VAR deemed that goal to be legit.

This goal turned out to be the winning goal that put Japan through to the next round and simultaneously eliminated Germany. After the match, Japan’s manager said that the technology would have picked it up if the ball was out. And later, FIFA confirmed that since the curvature of the ball was still within the line despite the base of the ball going out, the ball was still in play.

Japan’s second goal in their 2-1 win over Spain was checked by VAR to determine if the ball had gone out of play.

The video match officials used the goal line camera images to check if the ball was still partially on the line or not. pic.twitter.com/RhN8meei6Q

Argentina faced Poland in the final match of the group stage, fully knowing that anything less than a win could end their journey. And thus, the Argentines came out hard, putting the Europeans on the back foot. And they soon won a penalty, although how they won after one of the most controversial refereeing decisions of the World Cup.

When a cross was launched into the box, Lionel Messi and Polish goalkeeper Wojciech Szczesny went for it. However, Messi reached the ball first, and the shot-stoipper’s hand hit his face. The referee didn’t give the penalty, but the VAR recommended he have a second look, after which Paulus Van Boeke awarded the penalty.

However, replays showed that the goalkeeper made minimum contact with Messi, and the penalty was quite harsh. But Wojciech Szczesny kept his cool to save the penalty.

Poland's Wojciech Szczesny hits the face of Argentina star Lionel Messi in the first half of their World Cup match on November 30, 2022. Szczesny was penalized, but he saved Messi's shot. (Matthias Hangst/Getty) pic.twitter.com/q7C0ytSjvD

Portugal were leading against Uruguay 1-0 going into injury time. The Selecao das Quinas had taken the lead earlier in the match through Bruno Fernandes. And in injury time, Portugal threatened to add another as they crowded Uruguay’s goal. Under these circumstances, Jose Gimenez tackled Fernandes and, in the process, went to the ground.

While falling to the ground, he used his hand to cushion his fall when the ball struck his arm. And after consultation from the VAR review, Alireza Faghani awarded the penalty, which Fernandes converted to put the result beyond doubt.

The new handball rules are extremely ridiculous. What was Giménez supposed to do here? Cut off his own arm in a matter of seconds so it doesn’t touch the ball? 🤯 pic.twitter.com/YrAA4PWVHd

Tunisia vs France 1-0: Goal deemed to be offside

After France qualified for the round of 16 by winning their initial two matches, Didier Deschamps rested 10 of his 11 players for the final game against Tunisia. However, it came back to bite them strongly as they lost 1-0 to the Africans. However, late in the match, France equalised through Antoine Griezmann.

But a VAR check deemed the Frenchman to be offside. The move that led to the goals started when Aurelien Tchouameni played a ball into the area. When the ball was initially delivered, Griezmann was in an offside position. However, Tunisian defender Montassar Talbi’s clearance, fortunately, landed straight in the path of Griezmann, who scored the goal.

The disallowed goal meant Tunisia recorded a memorable win over France despite going out of World Cup 🇹🇳#ITVFootball | #FIFAWorldCup pic.twitter.com/cCHS17R5cO

When it was announced that the semi-automated offside technology would be used, FIFA said it would detect offside by the barest of margins. However, against Belgium, the technology took that to a new level. Belgium played Croatia, and the score was 0-0 when Croatia were awarded a penalty.

Luke Modric was on the spot to take it, but before he could do that, VAR ruled the goal offside. Then, in the build-up play, Dejan Lovren was adjudged to be slightly ahead of Jan Vertonghen, putting him in an offside position.

Is it possible for an offside to be any tighter? 😂

And replays showed that only the sleeves of Lovren were slightly ahead. However, the decision was given as offside which incited the rage of fans who deemed the decision to be outrageous.

REFEREES GET THE GREEN CARD