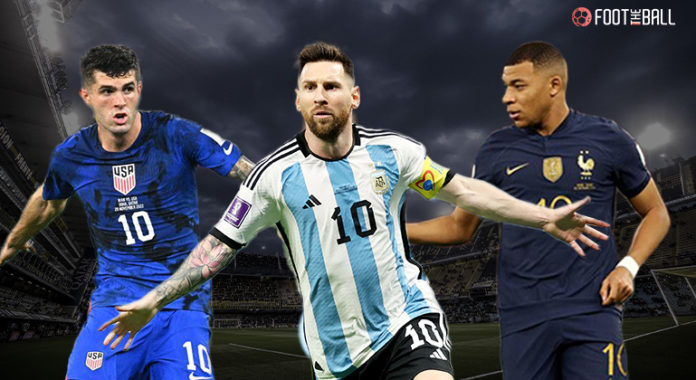 FIFA World Cups, and football’s greatest stars matching the cup’s hype, amping up their game, and creating eternal memories, is an inescapable reality. And fans all around are so here for it!

This edition in Qatar has produced some of the greatest matches and biggest upsets, where certain players have taken the world by storm with their performances. It makes you wonder who are the heroes that are repeatedly stepping up on the big platform.

FootTheBall answers this question by listing the players who have won the most player of the match awards.

What can you even say about Lionel Messi that has not been already articulated in the most simple terms or the most poetic words or even a blend of both?

For four World Cups now, the hopes and aspirations of Argentina have rested on Messi’s shoulders. But this time, perhaps because of the Copa America triumph, the relationship between the fans and Messi and his team has healed.

As a result, the Argentine captain has embraced the responsibility in this tournament. Much has been made about the dream of the little boy from Rosario but La Pulga has laid out his heart and soul on the field to make that romanticism his and Argentina’s reality.

With four of his five goals and two majestic assists, he’s galvanised ​​La Albiceleste to cross the line in high-pressure matches versus Mexico, Australia, the Netherlands, and Croatia.

The 35-year-old was given the player of the match for these four wins.

Standing tall and pretty at the peak of this tournament’s joint-top goalscorer list, with 5 goals at the point of writing, Mbappe has not only hit the ground running but he’s thrashed and destroyed everything and everyone, especially the goal net.

A rapid menace on the left wing and lethal in front of goal, the Frenchman has been the player of the match thrice.

Giroud just had to attempt that one 😆🚲#France #FRA #WorldCup pic.twitter.com/jeqHYwKOc3

Morocco have been the fairy tale story of this World Cup. The Atlas Lions etched their name in the history of the tournament when they beat Portugal 1-0 to reach the semi-finals. This made them the first African country ever to reach this stage. And while Youssef En-Nesyri scored the only goal, it was the man at the other end who again rose to the occasion.

With three clean sheets to his name, Morocco’s goalkeeper Yassine Bounou has been a wall. In fact, the only goal he has conceded was an own goal. This impressive show at the highest level has been seldom seen and is the chief reason why no opponent has found the back of Morocco’s net.

3 – Yassine Bounou, who made his 50th appearance for Morocco tonight, is the first African goalkeeper to record three clean sheets in a single edition of the World Cup. Heroic. pic.twitter.com/xW3DEN6LAL

The timeless Luka Modric with always an extra second on the ball than the rest, has shown in this World Cup (yet again!) why our generation is thoroughly blessed to witness his artistry in the middle of the park.

Leading the charts for most attempted and completed line breaks, the 37-year-old has been the heart of Vatreni’s masterful midfield, like he’s been for ages.

The 2018 FIFA World Cup Golden Ball winner was adjudged the player of the match in Croatia’s two goalless draws against Morocco and Belgium.

Became one of the four male goalkeepers to save three penalties in a World Cup penalty shootout versus Japan and made an incredible 11 saves against Brazil, the Croatian goalkeeper has been the talk of the town.

The 27-year-old has been resilient, underdogs Croatia’s unbreachable wall, whose motto of the tournament has been “​Thou Shalt Not Pass” as Brazil and Japan remorsefully found out.

The goalkeeper received the player of the match award for his heroics against both of them.

Team USA brought tremendous energy and enthusiasm to this World Cup, and their Captain America, Christian Pulisic, by leading their press from the front, personified the Stars and Stripes’ zest.

With the most assists made (2), most chances created (6), most take-ons attempted (15), and having scored the monumental, heroic winner against Iran that took the Yanks to the last 16, Pulisic lived up to the talismanic expectations Team USA placed on him.

Deservingly, Pulisic won the player of the match twice.