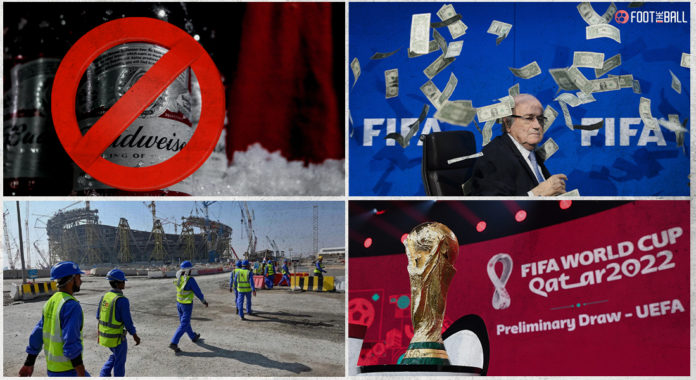 The 2022 FIFA World Cup started with a bang as Ecuador defeated hosts Qatar 2-0 in the opening match of the tournament. However, behind the roars of football fans and the allure of the footballing spectacle lie controversy, or should we say controversies. On December 2, 2010, Qatar was announced as the host of the World Cup. 4372 days later, the tournament’s opening match took place, but in between, the event has been subjected to a host of controversies from the start.

From the host selection process to corruption allegations, migrant workers’ death and the alcohol ban recently. There are issues regarding the scheduling of the tournament too. For the first time in history, the tournament is being held in winter, which has caused a clash with the regular domestic season in various countries.

Another issue that has attracted controversy is the reception the LGBTQ community might receive in Qatar. Despite the assurance of safety by Qatari authorities, fans are weary as homosexuality is punishable by three years in prison, a fine, and the possibility of a death penalty for Muslims under sharia law.

So, we take a look at the controversies that have plagued the 2022 FIFA World Cup.

When the voting for the hosting rights for the 2022 World Cup began, there were some top contenders. There was the United States, the host of the 1994 FIFA World Cup; there was Japan, and South Korea, who had co-hosted the World Cup in 2002 and now had the infrastructure to host the event single-handedly. And there was Australia and Qatar. Few would’ve given Qatar any chance of winning the bid, with good reasons.

The decision to host the World Cup in #Qatar is wrong on so many levels. The location, the timing, the obvious corruption in the decision to award the tournament to that country. (Thread) pic.twitter.com/6XLULEEHw5

The country did not have a prestigious football history, nor did they have any infrastructure in place to hold an event of such magnitude. However, the Gulf nation won the bid. It was later reported that several members of FIFA’s Executive Committee had accepted bribes to vote in favour of Qatar.

Sepp Blatter, then the President of FIFA, has now said that it was a mistake to award Qatar the hosting rights. He has even claimed that Qatar had used ‘black ops’ to win the bid. Investigations by several media houses have revealed that Qatar hired private security contractors to obtain information illegally on other nations’ bids.

What did I just see. Ten most controversial moments in FIFA World Cup history

One of the most significant issues that have plagued the World Cup is the condition of migrant workers. As mentioned earlier, Qatar had no infrastructure for the World Cup when it won its bid. So it needed to be built entirely within ten years, a massive undertaking. This required lots of workforce, and that too cheap labour.

Thus, Qatar started a massive immigration policy as people from south Asia came to the country. These labourers came through the Kafala system, which requires them to have an in-country sponsor, usually their employer, who is responsible for their visa and legal status. This makes the labourers vulnerable to the person who sponsors their visas.

In addition, during the construction, several migrant workers died. The death toll ranges from 6,500 to 15,000, according to various estimates. On top of that, allegations have emerged that the family of the workers who died due to negligence of safety standards were not paid any compensation. This is because these deaths have been attributed to natural causes, and under Qatari law, natural death does not warrant any compensation.

Not 6500, actually 12,412 migrant workers died on World Cup construction sites in Qatar. People who are going to watch World Cup football at Qatar stadium should think of those workers a bit.

One of the major sponsors for the FIFA World Cup is Budweiser, one of the significant alcoholic beverage brands in the world. However, Qatar has one of the strictest laws on the sale of alcohol. It is also the first Islamic country to host the World Cup. In Qatar, only tourists and local non-Muslims are allowed to consume alcohol.

However, the sale of alcohol is a mandatory stipulation for hosting the FIFA World Cup. And earlier, Qatar said that there would be alcohol available on the stadium’s premises and not inside for fans who had purchased tickets. The alcohol was to be served from 06:30 pm to 01:00 am.

So, fans arrived in Qatar hoping to find beer during the tournament. However, two days before the World Cup, Qatari authorities banned the sale of alcohol near the stadium’s premises. Under the new law, no alcoholic beverages will be available on the stadium premises. However, alcohol will be available in FIFA’s executive box, whose ticket prices cost £19,000.

Fans can still buy soft drinks, food and Budweiser Zero, a non-alcoholic beverage. Fans that want to consume alcohol can only do so in licensed bars and must do it inside the premises.

In addition, Qatar has introduced a sin tax on alcoholic beverages. This has jacked up the price of a pint of beer between € 13- € 17. However, FIFA has said that after discussions with the authorities, beer will be available at a subsidised rate during specific periods.

Look it’s really simple. Alcohol has been banned from the stadiums in Qatar because it goes against the country’s cultural and religious beliefs, unless you’re spending £19k on an executive box. Then it’s absolutely fine.

Under Qatari law, homosexuality is a crime with a punishment of up to three years in prison, a fine, and the possibility of a death penalty if the accused is Muslim. And while Qatari officials have assured that people of races, religions, and sexuality were welcome, fans are still unsure whether it is safe.

In a statement, the Supreme Committee for Delivery & Legacy (SC), responsible for Qatar’s infrastructure projects, said, “Everyone is welcome in Qatar, but we are a conservative country, and any public display of affection, regardless of orientation, ” is frowned upon. We simply ask for people to respect our culture.”

However, Khalid Salman, former Qatari player and a World Cup ambassador, has said that homosexuality is ‘damage in mind’. This has created an environment where LGBTQ fans are expected to hide their sexual orientation.

They are worried whether they will be the victim of attacks, verbally or physically, if people come to know of their sexuality.

Major General Abdulaziz Abdullah Al Ansari, a senior Qatari official, said, “If he (a fan) raised the rainbow flag and I took it from him, it’s not because I really want to, really, take it, to really insult him, but to protect him,” Al Ansari told the AP. “Because if it’s not me, somebody else around him might attack (him) … I cannot guarantee the behaviour of the whole people. And I will tell him: ‘Please, no need to really raise that flag at this point.”