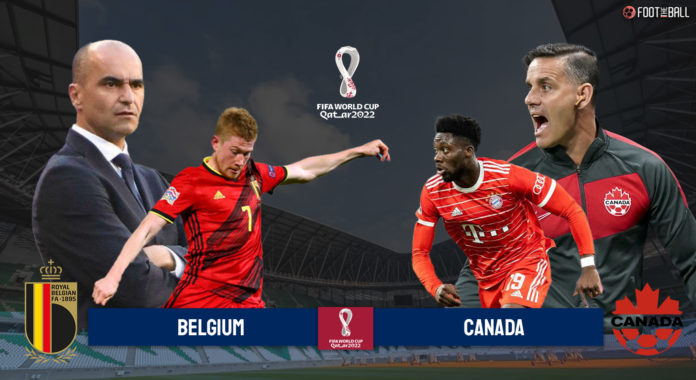 And their final bid to win the World Cup starts against Canada, a team with all the makings of a giant killer. Manager Roberto Martinez has announced a very strong squad, with the only notable commission being Divock Origi, who has been struggling for form at AC Milan.

One of the significant criticisms of Roberto Martinez is that he gives players a long leash based on their reputation and not their form. However, this time Martinez has added some brilliant young talent to the squad. Jeremy Doku, Lois Openda, Wout Faes, Arthur Theate, Zeno Debast, Amadou Onana, and Charles De Ketelaere are all part of Belgium’s next generation and could provide the extra spark for their team in Qatar.

For Canada, it is their second World Cup appearance since 1986. The Canadians topped both of their CONCACAF qualifying groups to book their place. They scored the most and conceded the least goals in the qualifying phase.

John Herdman has selected a squad that is young and fearless. Most of the players ply their trade in Europe However, in their first World Cup in 36 years, the Maple Leafs have been given one of the toughest groups. The team have been drawn in Group F with Belgium, Morocco and 2018 World Cup runner-ups Croatia.

However, Canada have nothing to fear and know that this set of players will become a solid squad four years from now when the World Cup will be held on their turf.

This group is fire. Anyone could finish first imo but I think Canada will be a huge overachiever. KDB will carry Belgium to 1st place. pic.twitter.com/0NpFQdi6S8

For Belgium, the biggest concern will be whether star striker Romelu Lukakau will recover in time for the match. The Belgian has been out of action for a month after suffering from a Biceps femoris muscle injury while playing for Inter Milan. If he fails to be fit, then Fenerbahce’s Michy Batshuayi is the favourite to replace him. Eden Hazard will be included in the attack despite his poor form with Real Madrid. In defence, Anderlecht’s 19-year-old Zeno Debast could also be given a starting spot based on his form.

Canada’s World Cup squad has only five players over the age of 30 years, which shows their trust in youth. However, the major worry is whether Alphonso Davies will be ready for the clash. The 22-year-old was injured while playing for Bayern Munich, and while Davies insisted he was fine, the final call rests with the Canadian medical team.

Canada’s captain Atiba Hutchinson will be the key in the midfield despite being 39 years and will bring experience to the team.

For Belgium, if there is one man who will be the key to their chances to win the World Cup, it will be Kevin de Bruyne. The midfielder is in the form of his life and has been the key to Manchester City winning a truckload of trophies. Before the domestic season break, de Bruyne was the best player in the Expected Threat (xT) metric. The Belgian will provide a lot of goal-scoring opportunities, but it will be up to Belgium’s attack to finish those chances.

If everyone's healthy, is this Canada's XI vs. Belgium?#canMNT #FIFAWorldCup pic.twitter.com/9VtNpJlPPt

For Canada, with Davies’ availability, the onus will be on the attacking duo of Cyle Larin and Jonathan David. Both scored 22 goals for Canada in the qualification phase and were the top two scorers overall. Canada have a solid defence, but the onus will be the attack to provide the fireworks as they have done so often in recent times.

Belgium know that it is their last chance to win anything with such a talented crop of players. And Martinez’s men have been handed a tough group to start with. Canada are no pushover and has nothing to lose, making them a dangerous proposition. However, Belgium’s talent is far superior and will help them move past the Maple Leafs.

FootTheBall predicts a 3-1 win for Belgium.