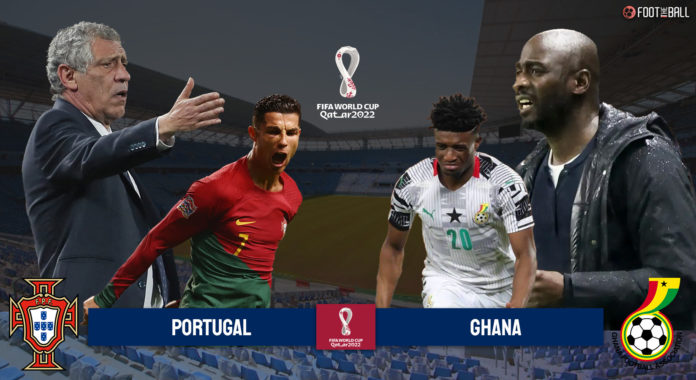 If we go by the average FIFA rankings of teams, Group H, comprising Portugal, Switzerland, South Korea and Ghana, is the second weakest group in the tournament. This means one thing: anyone can qualify from the group and surprise the world. However, out of the bunch, Portugal have by far the superior squad as they start their campaign with an opening match against Ghana.

While Cristiano Ronaldo maybe 37, he has his best chance to win the FIFA World Cup as Portugal now have one of their best squads in the tournament’s history. The 2016 European champions are stacked with talent in every area of the pitch. However, things are far from perfect in Portugal’s team after Ronaldo’s explosive interview over his situation at Manchester United. He is now on the team with two of his clubmates, Bruno Fernandes and Diogo Dalot.

Fernando Santos has named a 26-men that has experienced veterans that know how to win titles. However, there are some rising ballers in the team, such as PSG’s midfield star Vitinha, Benfica’s young gun defender Antonio Silva, and Nuno Mendes. With such a squad, Os Navegadores would expect nothing less than the top spot in the group, along with three points in each match.

Standing in their way is the young and energetic Ghana side. The Black Stars have only three players over the age of 30 years, which shows the trust manager Otto Addo has placed in the youngster. In fact, they have the youngest squad at the World Cup. In addition, Ghana have added Inaki Williams and Denis Odoi, who switched his allegiance from Belgium just in time for the World Cup.

However, young stars such as Mohammed Kudus and Tariq Lamptey will be responsible for providing the spark in the team. This makes them one of the most unpredictable teams in the World Cup, who could either lose all three of their matches or could go on a magical run deep into the tournament.

🇵🇹 Cristiano Ronaldo: "I believe Portugal is the best team in this World Cup. But we need to show it on the pitch." pic.twitter.com/wCBczTtS5X

Portugal have come out without any injuries in their warm-up matches, which means Fernando Santos has a fully fit squad to choose from. The only question is who will start in the front for Portugal. Joao Felix started in the warm-up match against Nigeria; however, Ronaldo is expected to get the nod in the World Cup opener. Santos also has a decision of who would start in the goal between Diogo Costa, Jose Sa, and Rui Patricio.

Ghana also have a fully-fit squad to choose from. The major question is whether coach Otto Addo will trust Tariq Lamptey to perform immediately. The defender has recently declared to play for the country and has only made two appearances for the team. Another dilemma will be whether 20-year-old talented star Kamaldeen Sulemana will be given a crack at the starting 11 ahead of experienced options.

While Cristiano Ronaldo is one of the best players ever to play football and can still be world-class at 37, there are no other stars in the team. And none is more skilful, talented and in form than Manchester City’s Bernardo Silva. The midfielder has been given a free role by Pep Guardiola and has transformed himself into one of the best players in the world. He has scored two goals and provided five assists in the Premier League, and Santos will be hoping he brings his best to Qatar.

Meanwhile, Ghana has Mohammed Kudus, one of the best youngsters in the world. The forward has been in brilliant form scoring five goals in the Eredivisie. In addition, he also scored four goals and provided two assists in the Champions League. And he needs to bring that form to the FIFA World Cup if Ghana are to qualify for the next round or replicate their 2010 World Cup run.

3 – Mohammed Kudus is the fifth player to score in three consecutive games in the Champions League for Ajax and the second-youngest to do so (22y, 63d), behind Patrick Kluivert (19y, 109d). Poacher. pic.twitter.com/ZAeFrHkXHK

Portugal have been handed an easy opening match against one of the lowest-ranked teams in the FIFA World Cup. And a win in the opening match will be the perfect way to start their campaign. Since 2006, Portugal have yet to reach the semi-finals and arrive with a squad that can match or even go beyond that. And while Ghana have an impressive team, they are far short on quality compared to Portugal.

FootTheBall predicts a 3-1 win for Portugal.