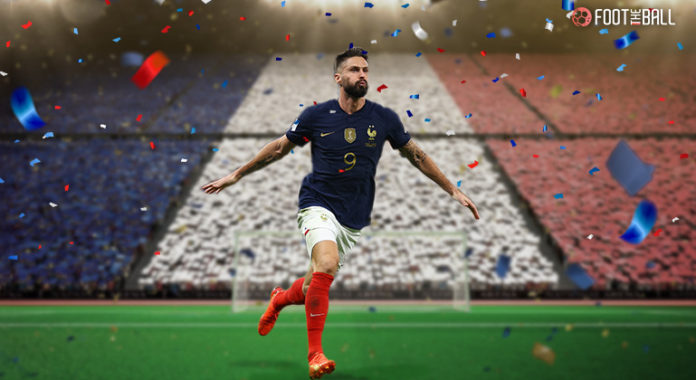 A persistent traditional number 9, in an era defined by lavish inside-forwards and silky false nines, for far too long, Giroud was chastised for everything he wasn’t while the abilities and resources that he did bring to the table were devalued.

The Frenchman spent many a year being sandwiched between the superior technical abilities of Karim Benzema, the superstar status of Mbappé, and the finesse of Antoine Griezmann on the international stage.

At the club level as well, especially during his time in England with Arsenal, fans and media alike levied unwarranted slack at him which, ignoring the Gunners’ reality, was primarily borne out of a desperate, nostalgic desire to be and play like the Arsenal of old.

It is only now, in the final quarter of his career (or injury-time, who knows?), after he’s repeatedly proved many of his doubters wrong that he’s being recognised and celebrated for who he is and what he does. “That total of 52 makes me feel great. It has a lot of importance for me,” Giroud said after scoring the landmark goal.

France’s manager, Didier Deschamps, also understands Giroud’s predicament. “He has had difficult periods in his career. He has often been criticised but people are now seeing his quality. He stayed strong mentally and has broken a very difficult record held by Henry,” said the 54-year-old.

However, those who play with him and know the inside-outs of France’s set-up have long recognised and respected his worth in the team. “To play at the top level for as long as he has is exceptional – respect… When no one believed in Olivier, he always stood up and proved them wrong. He is selfless and gives so much to the team. I hope he goes on and makes the record his own,” said his teammate Benjamin Pavard before Giroud made the record his.

What is Olivier Giroud’s role in the French team?

Forever pitted against and perceived subordinate to the now-Ballor D’or winner Benzema – not helped in the least by the latter’s publicly-stated ‘go-karting/Formula One’ analogy – now there are mainstream arguments bubbling that wonder if Giroud is actually more suited to this French system than the Real Madrid star. Interestingly, it’s happening during a World Cup where we’re witnessing a return of the traditional number 9 in general also.

Needing six fewer games than Henry to better his record and also boasting of a better goal-per-game ratio than Karim Benzema, Raymond Kopa and Zinedine Zidane, it is evident that first and foremost Giroud carries bundles of goalscoring threat. The 2017 FIFA Puskas award-winner is also not unfamiliar with scoring the spectacular now and then.

But, significantly, with his high work rate, towering aerial presence, and commendable back-to-goal hold-up play, Giroud provides a much-needed centre and balance to France’s abundance of attackers. The AC Milan forward is particularly adept at occupying the centre-halves and creating space for France’s flashy inside forwards/wingers such as Mbappé or Ousmane Dembélé or number 10s like Griezmann.

Find someone who looks at you the way Kylian Mbappe looks at Olivier Giroud 😅#BBCFootball #BBCWorldCup pic.twitter.com/WefCKH8SGI

“He’s a striker who is so useful for the team even if he doesn’t score himself, and there have been periods when he hasn’t found the net. But, even then, he helps others to score,” the French manager recently said.

For instance, in the men’s 2018 World Cup in Russia, where Giroud famously didn’t register a shot on target, he was, was regularly dropping the deepest and dragging his markers along with him, to unclog space in the attacking third, when compared to the likes of ​​Luis Suárez, Timo Werner, Robert Lewandowski, Romelu Lukaku, and Harry Kane. He applied the most pressures outside his attacking third per 90 and had the second-most touches per 90 in the same area of the pitch.

Yet, it would be wrong to box the 36-year-old only for his workmen-like shifts and his imposing physicality. He also has the deftness of touch in his inventory.

For proof, you simply need to see France’s second goal against Poland, where he caresses a high ball with his first touch before laying it off to Ousmane Dembélé on the right flank. Or you can go back to check out his assist to Jack Wilshere for that liquid Arsenal goal in 2013, the highlight reels of which might one day end up in some virtual museum.

Although a firm believer in “resilience and patience,” even Giroud wouldn’t have imagined that he would reach the pinnacle at which he now stands when he was in bouncing around in the lower leagues of France, playing for teams like Froges Olympique Club, Grenoble, and Tours, until he joined Montpellier at the age of 24.

Now, at 36, he’s a world champion, a Champions League winner, and a league winner in two different leagues, and France’s highest male goalscorer. He also has four FA medals and a Europa League winners’ medal. All this while, he’s scored 246 goals and made 90 assists in 610 club appearances, as per Transfermarkt.

If in any world, Olivier Giroud, happened to be a go-kart, rest assured, he’d be a darn good one. In this world, using his own words, he’s been a French football legend who had “the desire to… climb mountains” and tell the world that “anything is possible.”