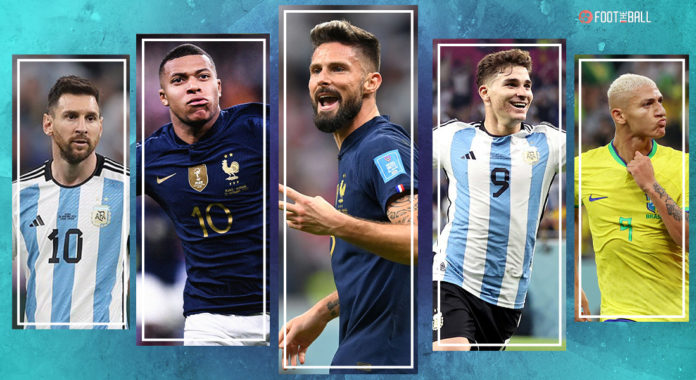 For reasons right or wrong, it’s always the attackers who hog the spotlight more than those playing behind them. Maybe the act of creating/scoring is momentarily more eye-catching and buzzing than the labour of preventing your opponents from scoring.

For reasons right or wrong, FootTheBall has ranked the top 5 attackers of the men’s FIFA World Cup in Qatar.

It is honestly hard to say something novel about the genius of Lionel Messi that hasn’t already been elucidated in the last two decades in the simplest terms or the most poetic words or even a blend of both. But, since much of his brilliance lies in repeating his magic on an everyday basis, it is perhaps warranted that those same words of astonishment, the odes to his beauty are recounted repeatedly.

He’s 35 and STILL the best 🤯 pic.twitter.com/SkzMeUwgWK

For four World Cups now, the hopes and aspirations of Argentina have rested on Messi’s shoulders. But because of the healed relationship between the fans and Messi and his team, this time these aspirations do not feel like an unbearable burden.

As a result, the Argentine captain has embraced the responsibility in this tournament and galvanised his team. Much has been made about the dream of the little boy from Rosario but La Pulga has laid out his heart and soul on the field to make that romanticism his and Argentina’s reality.

Second in the tournament charts for goals (7) and assists (3) and outrightly leading them for chances created from open play, dribbles, fouls drawn, and xG, Qatar 22 has been Messi’s Second Coming, where he’s cultivated a Maradonian spirit in him that El Pibe de Oro himself would’ve been proud of. Soon the maestro will also have his second shot at the greatest glory.

If the 2018 World Cup in Russia was Kylian Mbappé’s grand arrival to the kingdom that is elite football, this edition has been his imperial statement that he’s not simply the heir to the throne, he’s ready to be the King.

Barring the quarter-final against England, where he was exceptionally kept silent, Mbappé has put the fear of god in all his opponents. Electrifying and explosive on the wing, time and again in this World Cup he’s zipped past his marker, leaving him to eat grass.

But the threat he poses is not confined merely to the touchline. The PSG man is equally capable of playing the killer pass as well as being dexterous in wriggling out of close spaces – one only has to look at his assist for Randal Kolo Muani against Morocco. With 11 key passes played, he’s only behind his teammate Antoine Griezmann and Lionel Messi in that last.

Perhaps his most stellar attribute is his otherworldly lethality in front of the goal. The winner of the golden boot with 8 goals as well as netting a treble in the final speaks for itself.

In a French attack that has fired on all cylinders, Mbappé has been the talisman, and on Sunday, he nearly got his throne.

It’s not a divine coincidence that with the increasing involvement of Julián Álvarez – and Enzo Fernández – in the starting XI, Argentina’s quality of football also sweetened multifold.

“Nobody imagined Julián would have the participation and importance he has shown. The help he has given us has been absolutely spectacular,” his captain, Lionel Messi, was waxing lyrical about him after Argentina qualified for the final.

Nicknamed La Araña – the Spider – initially by his brother, with the logic that how else can he be so astute on the ball if he doesn’t have more than two legs?

Beyond his skills on the ball, La Araña has also been relentlessly chasing his opponents’ backline as if it only consists of spider-fearing Ronald Weasleys.

His tireless running, which includes pressing, off-the-ball runs, and dribbling with the ball, has been momentous for Argentina from an attacking and defensive point of view. His work rate has also covered up for the lack of his captain’s, affording the 35-year-old Messi the luxury of strolling around to plot his magic.

But Álvarez’s part in La Albiceleste is not only to be under Messi’s shadow. With 4 crucial, match-defining goals and the highest non-penalty xG in his team, the 22-year-old has had his fair share of the limelight.

Back in 2018, despite being a crucial cog in the World Cup-winning French team, Olivier Giroud received more flak than plaudits for not scoring a single goal or hitting the target even once in the entire campaign.

Now we’re in 2022, and Giroud is still like France’s Eiffel Tower, offering direction and an escape route in possession as well as providing a balance to Les Bleus’ abundance of attackers. With 15 aerial battles won – the most in his team – the number 9 has stamped his towering presence in this World Cup.

“He’s a striker who is so useful for the team even if he doesn’t score himself, and there have been periods when he hasn’t found the net. But, even then, he helps others to score,” the French manager Didier Deschamps recently explained Giroud’s importance.

🇫🇷 Lacks pace of wingers & Benzema
🇫🇷 Revelling as No 9, not a more modern inside forward
🇫🇷 One of the best off-the-ball creators at #FIFAWorldCup
🇫🇷 A striker for the collective@Ankaman616 on the international football unicorn, Olivier Giroud.https://t.co/tjmTjh8ib3

But, most significantly, this time around, Giroud has at last avenged the ghosts of his World Cup past by scoring four goals, including the winner against England in the last eight. In the process, the 36-year-old has overtaken Thierry Henry and become France’s leading male goalscorer in the process.

Great things were expected out of Brazil in this World Cup but, as it turned out, we only got glimpses of their (attacking) greatness. However, when this bunch of Brazilian players clicked on the field, for however long, they created moments of utter magnificence and joy.

And it was Richarlison who gracefully led them from the front. The 25-year-old was the leading goalscorer (3) and had the highest non-penalty xG (2.11) for the Seleção, alongside being his team’s second-highest chance creator (6) in this World Cup.

Yet, more than his stats, it was the manner of his play that puts him above many other strikers who also had a productive campaign. Two of his three goals were among the most exquisite scored in this tournament.

One of those was a net-shattering bicycle kick set by his own flicked first touch, as if playing in a futsal game.

The second was a one-touch passing, team goal that involved Richarlison doing keepy-ups with his head and then his foot just outside South Korea’s box, before intricately passing the ball forward to Marquinhos of all people, who squared it to his centre-back partner Thiago Silva (what was going on?), and he, with his first touch, found Richarlison’s run, who finally ended the South Koreans’ misery by slotting it home in the first go.