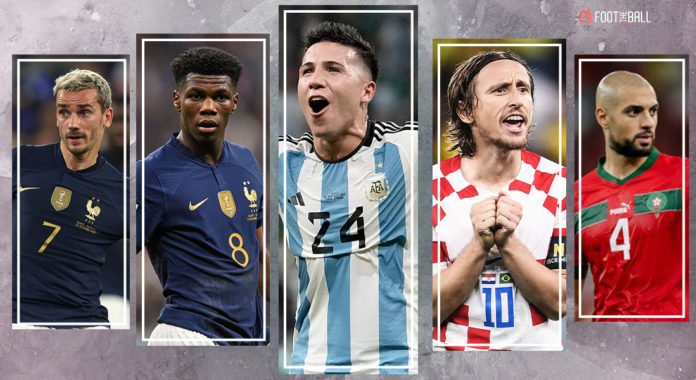 The forwards, with their flashy play and a bag of tricks, as if giving out candies to kids on Halloween, have a habit of grabbing the biggest headlines and catching the attention of the casual fan. But it is the midfield – the brain of a football match – with all its high-end skills, technicalities, complexities, and an implicit hold of the game, which the purists of the sport love to study and admire the most.

For them, and for any or everyone who loves the art of constructing and controlling a football match, FootTheBall has listed the Top 5 midfielders of the men’s FIFA World Cup in Qatar.

Can someone be a new discovery if they’ve already won a World Cup, played in a record 73 consecutive matches for their country, scored over 270 professional goals, and represented two of Europe’s biggest clubs for nearly a decade, one of which bought them for €120 million?

The answer is yes, if you’re Antoine Griezmann.

Le Petit Prince has been the heart-and-soul, the coal-and-ice, the very quintessence of Didier Deschamps’ French era, and the manager has made the most of the 31-year-old forward’s versatility over the years. At first, Griezmann started out as a winger, then thrived as a second striker, before being prosperously employed as a number 10.

But surely, before the World Cup, it would have been absurd to even suggest that Griezmann would not only fill the gaping midfield void created by the loss of Paul Pogba and N’Golo Kanté but also be one of the two best players of the World Cup while doing so, although credit also has to be given to Aurélien ​​Tchouaméni, who offers a defensive possibility and skillset that the France of 2018 perhaps did not have.

The vibrant Griezmann has brought to the French table Pogba’s creativity and Kanté’s work rate and resilience. For instance, this edition’s joint-top assist-maker (3) averages nearly 3.5 key passes per game as well as 2.8 regains in each match.

To say that he’s been the best player in the whole tournament is not an exaggeration. No other player, including Diego Maradona in 1986 has had a better expected assists rate (3.54) than the Frenchman, and yet he’s made the second-most recoveries and blocks for France in this campaign. Mind-boggling.

In the club football season before the start of the World Cup in Qatar, Real Madrid’s new cash money acquisition, Aurélien ​​Tchouaméni, had tucked in the heart of their midfield with such ease that Los Blancos were unfussed about letting go of the services offered by their 30-year-old, five-time Champions League-winning holding midfielder, Casemiro.

Similarly, the 22-year-old, who is one of the first names on Didier Deschamps’ teamsheet now, has displayed a maturity that belies his age and taken to the French midfield like a duck to water, especially at a time when questions of existential nature were looming large over it due to the lack of Paul Pogba and N’Golo Kanté.

Because of his supreme technical passing and defensive abilities, ​​Tchouaméni has been France’s protector on the back of whom their flashy forwards have excelled. His roaring presence is one of the major reasons behind Les Bleus’ roaring success.

The Real Madrid starlet has been omnipresent, whether it’s breaking play without the ball or organising it with the ball. He’s leading the French charts for balls recovered, tackles plus interceptions, passes made, pass completion rate, touches on the ball, distance covered, and even minutes played.

The icing on the cake for ​​Tchouaméni was the diagonal dart he launched from 25 yards out against England in the quarter-final to open the scoring.

They say there’s not a blade of grass in Qatar that Sofyan Amrabat has not covered in the last month. Sofyan has a brother Nordin who also plays professional football but wasn’t selected for the Moroccan national team, and yet there have been moments in this World Cup, where it has felt like multiple Amrabats have been on the pitch.

It’s little wonder that he’s leading the tournament stats for recoveries made. In this Morocco side that has functioned on overdrive throughout the World Cup, Amrabat has run the most distance, covering a whopping 70.58 km in six games.

The grit, the fight, the defensive resolve, and the great industry shown, especially while carrying the ball during counterattacks, shown by Amrabat exemplifies everything Morocco was about, and why multitudes of supporters related and rooted for Ambrabat and the Atlas Lions.

Like his midfield partner Azzedine Ounahi, Amrabat’s colossal shifts in Morocco’s epic victories, where he’d laid out his heart and more, have propelled him in the popular imagination and it won’t be a surprise if we see the Moroccan marshall in one of the biggest European clubs soon.

One of the most beautiful things about football is the timelessness of Luka Modrić, also lovingly called The Cruyff of the Balkans. 16 years on, at 37, the central midfielder is still the orchestrator-in-chief for whichever team he features in, and it was Croatia’s prerogative that Modrić played in this World Cup, as he did in the last.

As much as he is technically magnificent and a master of close control, the Croatian, who seems always have an extra second on the ball than the rest, is equally a manipulator of time and space that comes through his almost academic reading of the game and his surroundings.

While aesthetics form the crux of everything that Modrić does, even at his age, the 37-year-old is full of running and does not back away from doing the ugly work. In this World Cup, he’s recovered 51 balls and made a total of 26 tackles plus interceptions, which are the highest and second-highest figures respectively for any Croatian.

Zlatko Dalić’s Croatia, who look to slow down the game and take charge of its tempo through their midfield dominance, are made in the image of their captain. Following this template, Croatia have enjoyed plenty of success while Modrić has flourished all along.

For instance, among other things, he’s made the most progressive passes (61) in the tournament and has an xA of 0.8, which is the second-best in his team.

Enzo Fernández impressed Lionel Scaloni with his club form and chiselled out a space for himself in Argentina’s 26 and eventually won the Young Player of the Tournament award, despite featuring only thrice for his national team before the World Cup.

During the World Cup, the 21-year-old midfielder with his distinguished technical ability gave La Albiceleste a much-needed elevation in the initial stages and eventually chiselled out a space for himself in the starting XI. Whatever happens on Sunday, Fernández will exit Qatar as one of the hottest prospects in elite football.

Defensively sturdy with a high work rate matched with his creative capability to see and play a piercing pass, Fernández has what most midfield controllers who wear the number 8 would desire. “With his passing and vision, he’s a bit like Zidane. Enzo is only 21 years old? Either that’s a lie, or he’s a genius,” is how his former coach Jose Peseiro described him to A Bola.

His and Julián Álvarez’s rise has been the best thing that happened to Argentina after the shell-shocking start to their campaign. The 21-year-old has been instrumental in going forwards and backwards.

He’s played the fifth-most passes into the final third, the third-most through balls in his team, and is only behind Lionel Messi in terms of expected assists.

But his desire to be an artist hasn’t meant that he’s forgotten about his dirty laundry. Fernández has won the most tackles and recovered the fourth-highest balls for La Albiceleste.

As it has turned out, after Fernández’s arrival, Rodrigo de Paul, Alexis Mac Allister, and at times, Leandro Paredes have combined with him to form one of the most balanced and effective midfield of the tournament.