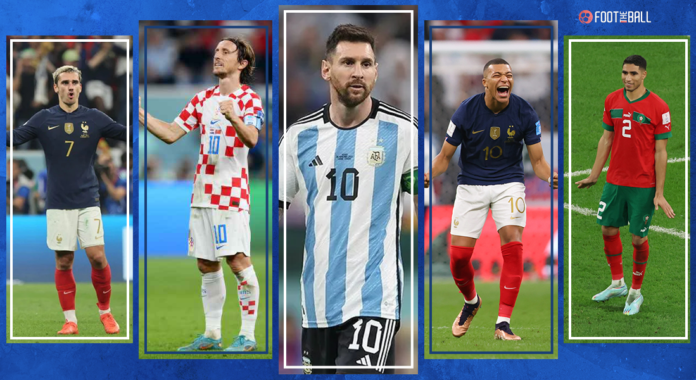 Why is the FIFA World Cup the single-most greatest sporting spectacle? If you think of it from a certain perspective, the tournament’s relatively systematic structure can answer this question.

The top-most players from the best footballing nations gather together and put on a show, taking each other on in the world’s most popular sport. The extravaganza at-large is divided into separate matches, which are more often than not determined by decisive moments.

Moments, therefore, are the smallest building-blocks responsible for elevating the World Cup to the soaring heights it currently stands at.

In appreciation of these moments, FootTheBall picks out the 10 greatest moments from the men’s FIFA World Cup in Qatar.

From the tournament build-up to the final reviews, Argentina’s campaign, touted as Messi’s Last Dance, was being scribbled and talked about in boatloads. Despite all the drama, anticipation, and narrative surrounding La Albiceleste throughout the World Cup, the first headline in their opener was seized by Saudi Arabia, who produced one of the greatest men’s World Cup upsets.

Trailing by a goal at halftime, Hervé Renard roused his team to bring down the house in the second segment and do the unthinkable. After Saleh Al-Shehri’s precisely-placed equaliser, five minutes later, Salem Al-Dawsari, with his in-swingling purler, cartwheeled and backflipped his nation into footballing folklore.

At the eleventh hour (minute), the dying seconds of a tense injury-time, which seemed to drag on forever, were finally upon us. With their team leading 2-1, Argentina fans were dancing and singing and celebrating in the crowd as if their beloved La Albiceleste had already reached their fifth semi-final in men’s World Cups. The frenzied fight, which had brewed in the final quarter of the game, where tempers of all involved were smelting with hostility and fury, was still on show.

Under such circumstances, Teun Koopmeiners and Wout Weghorst, in contrast with everything that was transpiring, composed a chutzpah moment of sheer innovation, guile, and cuteness to equalise and take the game to extra time.

Deployed with the responsibility of taking an inviting free-kick from just outside La Albiceleste’s box, Koopmeiners gently rolled the ball on the carpet into Weghorst’s feet, fooling the jumping wall of Argentinian defenders as well as leaving the draft excluder stuck on his sofa. A fired-up Weghorst received it, bullied his marker, and passed it into a helpless Emiliano Martínez’s goal with supreme ease.

Although Argentina clawed back to win on penalties, it was the Oranje comeback, fuelled by Weghorst and Koopmeiners, which elevated this encounter to the bracket of Unforgettable World Cup Classics.

Wout Weghorst’s equalizer for the Netherlands 🇳🇱 timed at 100:30 is the latest second half goal in a World Cup knockout stage game. pic.twitter.com/9dGlp3uYZ5

‘How may I assist you?’ ft Messi magic

Coming into the World Cup, the weight on the feet of Lionel Messi was gigantic. Like the Ring entrusted to Frodo Baggins, His has been a sacred duty that has always followed him like a shadow – the duty to re-enact Maradona’s craft and fulfil a dream that he dreams with all of Argentina, and Qatar was his last shot at glory.

What was his response? Strolling in the field to scan and study the details of its expanse. As he’s walking around in the park, suddenly the lightning strikes, and the magician pulls a wonder out his hat that is alien to the rest.

There were a fair few of such wonders in this World Cup but his assist in the quarter-final and the semi-final were a cut above.

The pass to Nahuel Molina against the Netherlands was a prime illustration of Messi’s absurd ability to read his surroundings and perceive imperceivable passes. Dribbling diagonally away from a host of orange shirts, his reverse pass to the right-back from the narrowest of the gap obliterated four Dutch defenders at once.

“Leo Messi found an angle that did not seem to exist” – Peter Drury on Messi’s assist to Molina pic.twitter.com/ZEzUxXmOmh

The second moment was akin to his Second Coming, rolling back the years and summoning Messi the Wide Winger to memefy Josko Gvardiol, one of the defenders of the tournament who had been on a mission to beef up his portfolio as the next big thing in football. On the right touchline, the 35-year-old Messi picked up the ball, glued it to his feet, and deconstructed Gvardiol, entangling the 20-year-old with his sudden bursts of acceleration, deceptive drops of shoulder, and manipulation of his body shape and weight, before putting the Croatian out of his misery, and teeing up Julián Álvarez.

by far the best video i’ve ever taken #messi pic.twitter.com/vJglh088Dr

“We can beat them, just for one day/We can be heroes, just for one day.” If David Bowie was alive and watching, he might have personally dedicated this hit of his to the Indomitable Lions from Cameroon.

Even though Cameroon failed to make it out of their group, by becoming the first African team to beat Brazil in the World Cup, Rigobert Song’s side did their part to make this tournament a World Cup of Upsets.

Despite a flurry of chances falling in the Seleção’s nest, Cameroon managed to maintain a 0-0 scorline for more than ninety minutes. And then in the 92nd minute, when a gift from god arrived for Vincent Aboubakar in the shape of Jerome Ngom Mbekeli’s cross, which the Cameroon captain dispatched with gracefully with his head.

As soon as the ball rocked the net, without a care about the consequences, the already-cautioned Aboubakar ripped off his shirt in celebration as he ran towards the corner flag. Even the referee, Ismail Elfath, couldn’t help but smile while showing the Cameroon captain a red card

In that moment, when nothing else mattered, Aboubakar was breathing and living and revelling in each and every sliver of the Here and Now. It was joy in its purest, unadulterated form.

Rage, rage into the night… Ramos

Cristiano Ronaldo is Portugal’s finest, and one of the greatest finishers to ever play the game. Imagine filling a Ronaldo-shaped void in the Portuguese starting XI in a knockout match of a World Cup on your tournament debut. It’s a pretty daunting task.

But not if you’re Gonçalo Ramos. If you’re him, you’ll score a hattrick on debut versus Swizterland and facilitate your team into executing one of the attacking performances of the tournament

On this exalted night for Portugal and Ramos, the 21-year-old became the youngest male player to bag a treble in a World Cup knockout game after Pelé in 1958.

No Ronaldo. No Problem 😬

“Drink it in Casablanca, relish it Rabat, this is your night. See it from atop the Atlas Mountains, all above the Marrakech express, a night Morocco will never forget,” exclaimed the poetic commentator Peter Drury after Morocco’s mammoth victory over Spain.

In the subsequent match against Portugal, similar tactics and spirit brought about an even greater victory, making Morocco the first African and Arab nation to reach the semi-finals of the men’s FIFA World Cup.

At the end of both these victories, the images of short-of-breath, physically exhausted Atlas Lions, lying on the ground, with a mix of pride, relief, jubilation, and astonishment visible on their faces and in their body language, were among the most beautiful moments of this World Cup.

The dreamy run of Morocco made them the pride of Africa, the Arab world, and the sweethearts of the footballing world. It seemed that when they stepped on the field, they derived energy from the wondrous support they received, and with their performances, returned the love to their supporters, in their own way.

Never-dying Croatia conquer the art of the penalty shootout

Croatia, the surprise package of 2018, yet again exceeded expectations and knocked the socks off heavyweights, most notably Brazil, to reach the last four.

The Vatreni told the world that neither was their previous run to the World Cup final a fluke nor was their method of getting there lucky.

In this edition, the addition of Josko Gvardiol and Juranovic in defence enhanced their quality and helped their maestro midfield in controlling the pace and tempo of the game, keep hanging in there, and ultimately, proceed to penalties, where two of their biggest moments came.

Assured and calm, Dominik Livaković was the talk of the town for his heroics between the sticks. The 27-year-old was Croatia’s unbreachable wall, whose motto of the penalty shootout was “​Thou Shalt Not Pass” as Japan and Brazil remorsefully found out.

Dropped in the same group as Spain and Germany, not many were giving the Japanese a chance of qualification coming into the tournament.

As it happened, Hajime Moriyasu’s well-drilled, highly-organised side transformed into a giant-killing outfit, stunning both the top cats of European football, booting out Germany and finishing above Spain, in the process.

Their ability to turn up the heat in the second half, break at a blistering pace, and stay brave and hopeful in adversity impressed many, and made them one of the stories of the group stage.