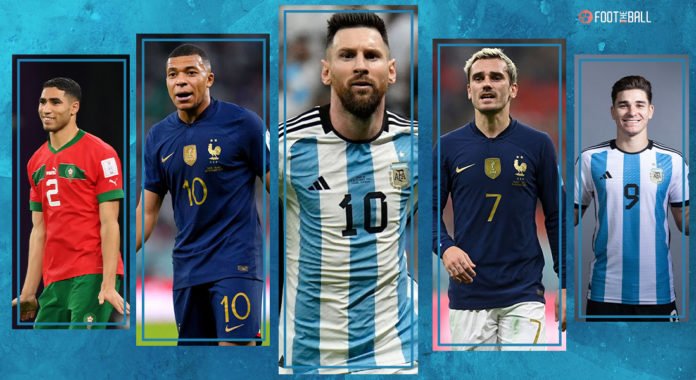 More than 800 players landed in Qatar last month to fulfil their dream to be the world champions in the greatest sport in the world. Some did fascinatingly well, others underperformed, as narratives and stories were written aplenty.

From those 800-plus footballers, FootTheBall has selected the eleven who stood tall above the rest and won the hearts of millions. Here’s our Team of the Tournament

In this World Cup of upsets and underdogs, Croatia punched well above their weight, and their safe-keeper, Dominik Livaković, was in the thick of it between his sticks, making 24 saves – the most in this tournament.

Croatia established themselves as the Kings of the penalty shootout in this World Cup, and they had their 27-year-old goalkeeper to thank. He also heroically made 11 saves against Brazil in the quarter-final.

One of the best right-backs in the world right now, Hakimi let it know why he’s rated that highly at the greatest footballing platform there is.

Better known for his adventure and endeavour going forward, Hakimi matched Morocco’s vibe and was peerless in defence throughout the campaign, winning the joint-most tackles (17).

However, his truer, freer self was equally critical for releasing pressure from the Atlas Lions, as the right back consistently and beautifully combined with Hakim Ziyech on the right flank.

Don’t be sad bro, everybody is proud of what you did, you made history. ❤️ @AchrafHakimi pic.twitter.com/hvjQvQ84c6

The Messi moment aside, there was not a blot in Josvo Gvardiol’s commanding World Cup display. Throughout their campaign, Croatia depended heavily on their defensive resolve and ability to control the tempo of a game at will, and the towering centre-back, with his supreme ball-playing competency, was a big reason why Vatreni finished on the podium.

The 20-year-old led the tournament charts for clearances (37) to go with his second-most interceptions (10). RB Leipzig would be looking for a hefty fee for their star defender after such a performance.

Can't remember the last time a U-20 center back showed up at a World Cup and flat out dominated like Joško Gvardiol has. Croatia have the leader of their defense for the next decade and more. pic.twitter.com/BztefgCh1P

Like how it was with the rest of the Argentinian squad, Christian Romero elevated his levels substantially after the defeat in the first match against Saudi Arabia.

Aggressive, expressive, and commanding in the backline, Romero was La Albiceleste’s protective rock. The imperial centre-back won 62.5% of his aerial battles, made 23 recoveries, and five crucial blocks during Argentina’s World Cup-winning campaign.

Came into to fill his brother’s spot, who was unfortunately ruled out with an injury versus Argentina, Hernandez mustered a great synergy with Mbappe on the left flank, and caused havoc. He also was also the first opposing person to break the Moroccan lock in this tournament, securing an entry to a second-consecutive men’s World Cup final for France.

Sofyan Amrabat arrived in Qatar with an extra pair of lungs. The defensive midfielder’s daring, perseverance, and sheer will to not be tired and keep pushing till the end epitomised a lot of what Morocco were about in this World Cup and why they became everyone’s darlings.

Tackles, interceptions, clearances, name the defensive task and the omnipresent Amrabat executed it diligently, alongside providing great relief to the Atlas Lions with his marauding, line-breaking runs up the field.

The defensive midfielder recovered the most balls for his team (57) and made the fifth-most successful tackles in the tournament (10).

Injuries to Paul Pogba and N’Golo Kante forced Didier Deschamps’ hand to turn to his most loyal servant Antoine Griezmann and drop him in the heart of his midfield as a creative, box-to-box workhorse.

It’s one thing to do a decent job, and it’s a whole lot different to be one of the three best players of the tournament, and touch heights that even Diego Maradona couldn’t in 1986. His xA numbers were the highest-ever recorded in the history of the men’s World Cup, trumping El Diego’s record.

21 – Antoine Griezmann 🇫🇷 has created 21 chances in the 2022 #FIFAWorldCup, more than any other player in the tournament, also registering the highest average, with 3.5 chances per game. Engine.#AskOpta#AskOptaJosé#Qatar2022 pic.twitter.com/xNYXL9rJ7n

The deeper we got into the tournament, the louder Argentina’s midfield roared, and by the end of the competition, they were the most balanced and yet varied. But it was Enzo Fernandez’s arrival and eventual establishment in the starting XI that galvanised La Albiceleste.

Alongside boasting of an efficient engine on him, Fernandez displayed superior vision and tempo-controlling skills from the middle of the park. He played the third-most through balls and sixth-most passes into the final third in this tournament.

The 21-year-old deservingly bagged the Young Player of the World Cup as well.

This World Cup was Lionel Messi’s Promised Land, it was god’s promise, football’s ode to one of the greatest players ever to grace the field. But, boy, did he have to work hard for it!

After years of being crushed under the responsibility of extending what Diego Maradona started, Messi was liberated at the Maracana in the previous Copa America. He brought that energy to this World Cup, galvanising his team to finally lift the gilded cup for his country after a 36-year-long wait.

The 35-year-old’s magic won him the Player of the Tournament to wrap it up as well.

It’s been an absolute privilege to watch Lionel Messi for nearly 2 decades. Moment after moment of spellbinding, breathtakingly joyous football. He’s a gift from the footballing Gods. So pleased that he’s lifted the ultimate prize in our sport. Gracias y felicidades, campeón. pic.twitter.com/XTiZUcovLI

If it was Enzo Fernandez’s involvement that turned Argentina’s tide in the middle of the park, the rise of Julian Alvarez was the key that unlocked their offence.

Showing a calmness in front of the goal that was beyond his years, Alvarez’s tireless and intelligent running gave Lionel Messi the luxury to stroll and conjure his spells as well as created a host of chances for himself too, four of which the 22-year-old slotted home.

A defender’s fever dream, a goalkeeper’s finger-thrasher, Kylian Mbappe has precisely been that throughout the World Cup, scoring 8 goals and winning the race for the golden boot.

Kylian Mbappe is the first player to score a World Cup final hat-trick since England's Geoff Hurst in 1966 🔥🔥🔥 #FIFAWorldCup pic.twitter.com/0vuC3LAtOl

Les Bleus’ prime superstar, the 23-year-old employed his superpowers of dashing past players, wriggling through tight spaces, and storming the net thrice to single-handedly drag France in the final against Argentina, making it the greatest final ever played, if not the greatest football match ever.