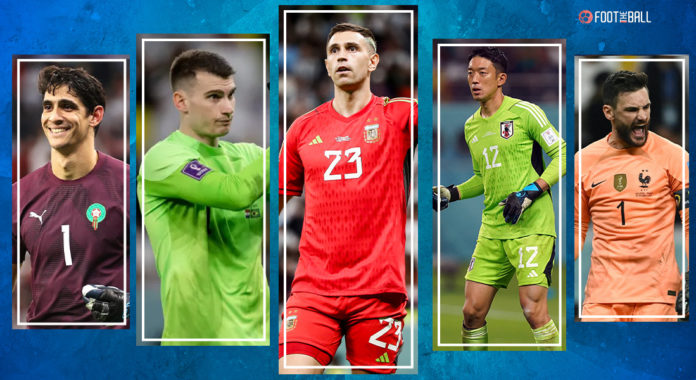 They say that the job of a goalkeeper is thankless; one mistake, and it is an unforgiving, match-turning blunder.

But they also say that while the attack wins you matches, it’s the defence that wins you tournaments, and at the heart of a team’s backline is their goalkeeper, shouting and organising, jumping and diving, and these days, also threading pitch-perfect passes under pressure.

To thank these performers and in appreciation of their varied skills, FootTheBall has listed the five shot-stoppers who turned into showstoppers during the 2022 men’s FIFA World Cup in Qatar.

The tales of the defence of the Moroccan fortress will be told for ages, and in those tales, one of the protagonists will be the Atlas Lions’ smiling guardian Yassine ‘Bono’ Bounou.

With the most clean sheets (32 in 59 matches) throughout 2021 and the sixth-best save percentage (78%) in Europe in the 2021-22 club season, Bounou’s talent was increasingly getting recognition in some circles but after his back-to-back player-of-the-match performances in Morocco’s epic victories over Spain and Portugal, the love for him rightly went through the ceiling.

Alongside Emiliano Martínez and Jordan Pickford, the Moroccan goalkeeper has kept the most clean sheets in this World Cup (3).

The 31-year-old’s best moments between the sticks were saving two penalties in the shootout against Spain and acrobatically stopping João Félix’s thunder-curler late in the game against Portugal.

Luis Enrique: "Ahead of the match against Morocco, we analysed Bono's penalty saves. Statistically, Bono has guessed 80% of the penalties in his career… Not saved, but guessing the side to which the kicker takes the penalty. That's unreal. He is very good." pic.twitter.com/bwduJs8I1r

In this World Cup of upsets and underdogs, Croatia have punched well above their weight, and their safe-keeper, Dominik Livaković, has been in the thick of it between his sticks, making 24 saves – the most in this tournament.

Croatia established themselves as the Kings of the penalty shootout in this World Cup, and they have their 27-year-old goalkeeper to thank, whose motto for the tiebreaker has been “Thou Shall Not Pass”, as Japan and Brazil remorsefully found out.

In the quarter-final against Brazil especially, Livaković played like a man possessed, making a whopping 11 saves  – the most in a World Cup game after Tim Howard’s 16 in the 2014 edition.

Croatia have conceded 3 goals from 8.36(xG) at the World Cup.

“I heard Louis Van Gaal saying ‘we’ve got an advantage in penalties’, if we go to penalties we win.’ I think he needs to keep his mouth shut,” raged Argentina’s hot-headed, spicy net-minder Emiliano Martínez, after saving two penalties in the tiebreaker against the Netherlands in the quarter-final and dragging his team to the semifinals.

Martínez is evidently among those who love to open their Big Mouth and not shy away from enacting Big Gestures, but in this World Cup, the Argentine number 23 has walked the talk, with his greatest contributions being the incredible late save in the final and the massive performances in the shootouts against the French and the Dutch.

In general as well, ‘Dibu’ has been a figure of relative security and assurance between the sticks. To go with his three clean sheets, the joint-best in this World Cup, he has claimed around 15% of the crosses that have entered his box.

Emiliano Martínez is him pic.twitter.com/tzwyPqK3ED

Made his debut for Les Bleus in 2008, captain since 2010, Hugo Lloris is one the finest France have ever produced, and the 35-year-old has made himself and his team proud with his professionalism in goal during this World Cup, where he’s also become his country’s male record appearance holder.

Despite keeping just one clean sheet that came against Morocco in the semi-final, Lloris was in fine form throughout the World Cuo. Moreover, he flaunts a healthy save percentage of around 82%, the sixth-best in this edition, as well as secures 10.4% of crosses delivered in this area, the fifth-best rate in the tournament.

But more than his stats, it’s the French captain’s rise to the big occasion that has been doubly impressive. Both in the quarter-final versus England and the semi-final against Morocco, for lengthy periods of the game, Les Bleus were under the pump and needed their last line of defence to turn up on numerous occasions. The French number 1 stepped up, making crucial, acrobatic stops in the two games.

Hugo Lloris made 𝟲 ​​𝘀𝗮𝘃𝗲𝘀 against England, the 𝗺𝗼𝘀𝘁 by a 🇫🇷 goalkeeper in a major tournament since 𝗵𝗶𝗺𝘀𝗲𝗹𝗳 against South Africa during the 2010 World Cup (6) 😤⛔️ pic.twitter.com/4sZ2hfcOca

Japan might have succumbed to Croatia’s charm of monotony but their journey to the round of 16 wons hearts of millions as they stood on the pinnacle of the group of death by defeating European giants Spain and Germany, booting out the latter in the group stages.

A crucial part of Japan’s success, particularly in their defence, was the 33-year-old Shūichi Gonda, who had the time of his life in this tournament.

He cut a figure of safety against La Roja, making 4 saves, but it was his player-of-the-match performance against Germany’s relentless incursions that blew everyone away. In that fixture, despite giving away a penalty, Gonda made 8 saves in total, with 4 of them coming back-to-back-to-back-to-back within a span of 20 seconds.