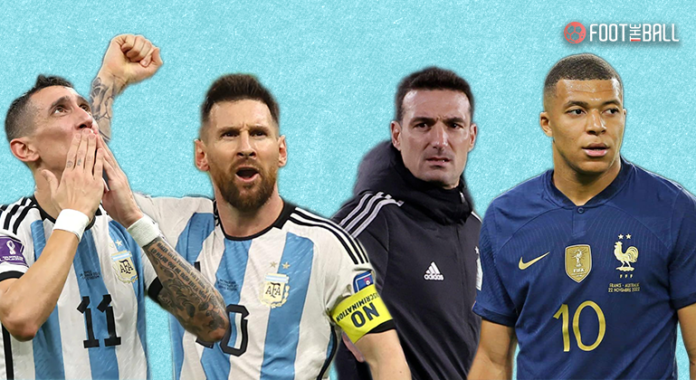 Ohh, Football, you crazy game. It was the final fitting for Lionel Messi as he won the World Cup trophy in perhaps the best final match witness in the tournament’s history. After an entertaining 120 minutes, where the score stood 3-3, goalkeeper Emiliano Martinez was the hero again as Argentina scored all their penalty kicks.

Lionel Messi scored two, while Kylian Mbappe scored the second hat trick ever in the World Cup final. In a match where Argentina led by two goals before France game back, Argentina again took the lead, and France again came back before Argentina finally held their nerve to win the final.

Argentina started the match on the front foot and had a chance in the 3rd minute as an Angel de Maria cross found its way to Julian Alvarez via De Paul and Messi, but the striker was offside, and Lloris also saved the ball.

However, La Albiceleste kept the pressure and had another chance as some Messi magic on the right left de Maria with an opportunity, but he blazed the shot over from his weak right foot. However, they eventually earned their reward as Ousmane Dembele brought down de Maria inside the box. Referee Szymon Marciniak immediately pointed to the squad, and Lionel Messi duly converted it to give Argentina the lead.

And despite leading, Argentina remained on the front foot and would soon get their second. This was one of the best goals of the tournament. It all started with Messi, who played a net pass to Alvarez on the right, whose first-time pass found Alexis Mac Allister. The Brighton forward swung a low cross into the box, where de Maria took a touch before slotting the ball past a hapless Hugo Lloris.

Didier Deschamps immediately made two changes before half-time, with Randal Kolo Muani and Marcus Thuram replacing Kylian Mbappe and Ousmane Dembele. This gave impetus to France, but they couldn’t find the back of the net before half-time.

Argentina didn’t lose even a single drop of energy as they continued to push France in their half from the start. De Maria almost got his second of the night, but his powerful shot was hit straight at Lloris.

With the minutes ticking by, France also became desperate. Adrien Rabiot was given a yellow card for a scissor kick tackle on De Paul. But, after 60 minutes, France were yet to register a shot at the goal.

In fact, France’s first shot came in the 71st minute, which was not even on target. However, it didn’t mean that Les Bleus were on the front foot as Argentina continued to create chances on the other end.

However, out of nowhere, France won a penalty as Otamendi fouled Kolo Muani. Mbappe scored the resultant penalty. This was all the impetus the defending champions needed as they immediately went on the offensive.

And it was Messi whose mistake led to the equalising goal. The forward was robbed by Kingsley Coman and gave the ball straight to Marcus Thuram. He played a neat one-two with Mbappe, with the P.S.G. man connecting a sweet volley from a dropping return to score past Emiliano Martínez to complete the comeback as the match went into extra time.

Argentina started the extra time on the front foot, but France reinvigorated and started growing into the match. Then, with Scaloni looking for a goal, he sent on Lautaro Martinez and Leandro Paredes for Alvarez and De Paul.

Lautaro would soon find himself with the best chance of the game but instead of shooting the ball the first time, he waited, and the Upamecano snuffed out the chance soon. Next, he would find himself one-on-one with Lloris, but Upamecano again got the better of him.

And finally, it took some Lionel Messi magic to give Argentina the lead again. From the right, Messi found Martinez, whose chance was parried by Lloris straight into the path of Messi, who made no mistake.

It appeared as if the match was finally in Argentina’s favour. However, France had other ideas as they won another penalty as Gonzalo Montiel caught Mbappe’s shot. Mbappe scored it to become the second player in history to score in a World Cup final.

The match was not done yet as Lautaro Martinez and Kolo Muani both had chances but failed to do so, with the latter drawing the save of the game from Martinez.

With nothing to separate the teams, the match went into penalties. And their quarter-final shootout hero Martinez came to the party saving one penalty while France missed another to hand them the title.

Argentina give Messi the perfect send-off

Argentina had the best player in the world in their ranks but only had one Copa America to show. And when they arrived in Qatar, Messi was 35 years old with his best football behind him. But Argentina coming into the final, played perhaps their best football in years. For 70 minutes, the team kept the relentless pressure to thwart the French.

And Argentina survived not one but two comebacks to give Messi the perfect send-off.

Kylian Mbappe proves he can do it when it matters

By the 70th minute, France must have been wondering what went wrong for them. Their first shot came a minute later, with Mbappe missing the target. However, in the depth of despair, Mbappe showed why he is one of the best players in the world. After scoring the penalty with a ferocious penalty, Mbappe produced one of the sweetest volleys to bring France back into the match.

Lionel Messi took only 23 minutes to create history in the 2022 FIFA World Cup final. When he converted the penalty to score the first goal of the match, Messi became the first player in World Cup history to score in every knockout game. Since the first match loss against Saudi Arabia, Messi has been a man on a mission. Even the move for the second goal that Argentina scored in the final was started by Messi.

Lionel Messi, you are the G.O.A.T.