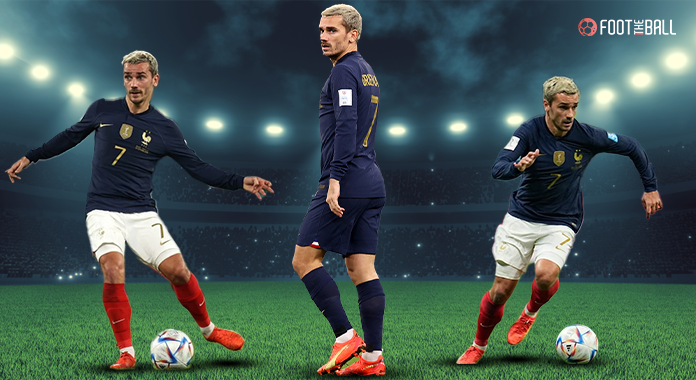 The medicinal discovery of the antibiotic Penicillin, the first wonder drug, changed the course of the world for good. But this great discovery itself was an accident. Sir Alexander Fleming casually experimented with his experimentation before skedaddling off to a two-week holiday. He returns, he observes that something significant has happened in his experimentation, and voila, Penicillin is born.

Now let’s skip the science lesson about how the life expectancy of humankind was increased multifold and return to a phenomenon of much greater importance – football.

Can someone, who’s already won a World Cup, played in a record 73 consecutive matches for their country, scored over 270 professional goals, and represented two of Europe’s biggest clubs for nearly a decade, one of which bought them for €120 million, be accidentally (re)discovered?

The Evolution of Griezmann of France

The No. 7 has been the heart-and-soul, the coal-and-ice, the very quintessence of Didier Deschamps’ French era, and the manager has made the most of the 31-year-old forward’s versatility over the years.

At first, Griezmann debuted on the left wing before being veered to the right after a few appearances. Then, during the Euro 2016, he thrived – literally, unabashedly thrived – in a two-man forward pairing as the little striker to Olivier Giroud’s big striker, scoring 6 goals in the tournament and winning the golden boot. In Les Bleus’ World Cup-winning campaign in 2018 as well, Deschamps put in a similar role, and Griezmann produced the goods, netting 4 times and taking home the silver boot.

Paul Pogba on his social media has called Antoine Griezmann

“GriezmannKante” as he’s been playing like Kante in his new role for France 🤣#FIFAWorldCup pic.twitter.com/jJTmNyGvRS

When Karim Benzema caused a whirlwind with his performances in Europe and, after a 5-year-long hiatus from international football, was recalled to the French set-up for the Euro 2020, Griezmann was dropped behind the Real Madrid captain and Kylian Mbappé in a proper number 10 role.

The Big Bang before the World Cup

The admirers of Griezmann, including his manager, evidently understand that he is versatile, primarily because of sheer grit, supreme technical ability, and work rate.

But surely, before the World Cup, it would have been ludicrous to even suggest that Griezmann would perform swimmingly as a box-to-box midfielder.

While it was the leisure of his vacation that did wonders for Sir Alexander Fleming’s discovery, Deschamps was not so lucky. Coming into the World Cup, due to injuries to Paul Pogba and N’Golo Kanté, an existential threat was looming over France’s midfield, and Deschamps put his bet on his most trusted servant, Griezmann, to fill their gaping void and the 54-year-old struck lottery.

In Qatar, Griezmann has incredibly morphed into a box-to-box midfielder who is a compound of Pogba and Kanté, confusing the former’s creativity with the latter’s work rate and resilience. And while performing his newfound role, it won’t be an exaggeration to say that he’s been the best player in the whole tournament, above Mbappé, and perhaps even above Messi.

He’s the competition’s joint-top assist-maker (3) and the leading chance creator (21), who averages 3.5 key passes per game. What’s more, no other player, including Diego Maradona in 1986 has had a better-expected assists rate (3.54) than the Frenchman. Imagine transforming from a striker to a creative box-to-box midfielder, and trumping El Diego. Mind-boggling stuff.

And yet, Griezmann doesn’t just notoriously exploit half spaces around the inside right channel, exist on the half-turn, carry the ball progressively, and thread key passes after dropping deep as if he’s a tailor with his needle.

He’s also equally effective in his own half and his own box. Full of energy and seemingly with an extra pair of lungs, the 31-year-old has made 2.8 regains per match and completed the second-most recoveries (32) and blocks (7) for his team, and France have dearly needed that, especially in the knockout stage, where they’ve done deep, desperate defending for large swathes of the game.

For instance, against Morocco, when France held only 39% of possession, Griezmann was a recurring presence in his defensive area, making three crucial clearances, two tackles and two interceptions.

Deschamps, the mastermind behind Griezmann’s reincarnation, recently summarised with great detail, saying: “I ask different things of him. There is no sacrifice on his part, because he is so generous that he takes pleasure both when he touches the ball and when he passes.

“He will certainly score fewer goals, but he loves to tackle and recover the ball. With his left foot, he is capable of beautiful things and can shoot the set-pieces rather well. He has everything to play deeper: the vision, the work-rate, the touch, the energy, the intelligence.”

It is no wonder that Griezmann, who holds Deschamps in such dear regard, understood his assignment to perfection and happily sheds his blood and sweat in each match. “I owe him [Deschamps] everything in the national team,” he said last week, “I give everything for France – for the shirt, but also for him. And I am trying to do everything I can so he keeps trusting me. Every move, every game is like a ‘thank you’ I am sending him. I want him to be proud of me.”

As illustrious as ​​Le Petit Prince’s club career has been, he’s lived his best footballing moments in Les Bleus’ shirt. It’s befitting that after being caged at Barcelona for multiple years and then being entangled in the weird financial, contractual cobweb at Atletico Madrid for 11 games, Griezmann rediscovered and liberated himself in the national colours.