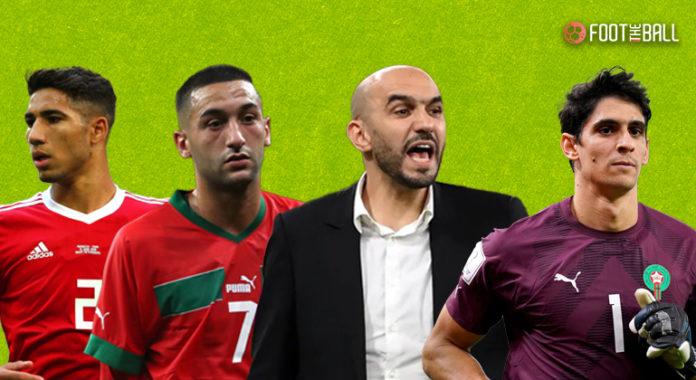 And this is why Morocco’s dream run is the stuff of dreams. In the last World Cup, Morocco had produced an underwhelming display as they took only one point and were knocked out in the group stage. They had scored two goals, the least in the FIFA World Cup.

However, four years later, Morocco look like a changed side. Their defence has remained as strong as four years earlier but now has the added support of their midfield and attack, making them the giant killers. Furthermore, this team also sacked their head coach Vahid Halilhodzic three months before the World Cup.

Any other team would have struggled under these circumstances, but new coach Walid Regragui has steered the ship calmly. Before his appointment, Morocco had already qualified for the World Cup after topping their group with a 100 per cent win record before thrashing DR Congo 5-2 in the third-round qualifiers to book their place in Qatar.

So, Regragui had big shoes to fill which he has done helping Morocco reach the quarter-finals. Now they stand on the cusp of history, defeat Portugal and become the first-ever African team to reach the semi-final. And the Atlas Lions know what it likes to create history, as they were the first African team to top a World Cup group in 1986.

So, how did Morocco manage to upset the odds at the 2022 FIFA World Cup?

Morocco had arrived in Qatar after a brilliant unbeaten qualifying phase. However, after their underwhelming display in 2018, nothing much was expected of the team. On top of that, they were drawn into Group E with 2018 finalists Croatia, Belgium and Canada. This presented them with a considerable challenge, which the Atlas Lions took head-on and became the first African team to reach the semi-finals of a World Cup.

Their first match came against Croatia, and despite having only 32 per cent possession, they managed to have two shots on target. However, their defensive stability helped them eke out a goalless draw.

The performance was resilient in nature but didn’t inspire confidence among Morocco’s fans and their critics. However, all that would change in just four days when they took on Belgium. At the Al-Thumama Stadium, Morocco produced a brilliant performance to defeat the Europeans. Here too, the team had only 32 per cent possession but managed to use the ball effectively using the wing to stretch their opposition.

Morocco had 11 shots out of which four of them were on target. This win put them on top of the group a position they didn’t relinquish as they defeated Canad to qualify for the round of 16.

By now, the team had proved they were not to be taken lightly. However, despite that, no one gave them much chance against Spain, one of the favourites for the World Cup title. Luis Enrique’s men did have weaknesses but also showed that on their day they could be ruthless as shown in their 7-0 thrashing of Costa Rica.

Morocco needed to be smart about their possession and they did exactly that. With only 22 per cent of possession, they managed to defy La Furia Roja for 120 minutes. However, the star of this match was their goalkeeper Yassine Bounou who made several vital saves.

However, the Sevilla man reserved his best for the penalty shootout as he made two crucial saves from Carlos Soler and Sergio Busquets.

The run till here was amazing in itself but what Morocco did next etched their name in golden letters in the history of football. In the quarter-finals, they faced Spain’s neighbours Portugal, who recently had one of their best squads.

But Morocco had other ideas, and like so many times before, they proved the naysayers wrong as they took the lead in the 42nd minute. And it was their striker Youssef En-Nesyri who opened the scoring with an outrageous leap over Diogo Costa and Ruben Dias to head the ball into the net.

Following this, their famed defence that has conceded only one goal (that too, an own goal) in the current World Cup did its job perfectly. Even when Portugal had chances, Morocco’s goalkeeper Yassine Bounou made some brilliant saves. And when referee Facundo Tello blew the final whistle, Morocco had created history. However, the Morocco, that everyone has seen in this tournament, would not be content and would want to reach the final.

Morocco are unbeaten in their last four #FIFAWorldCup games 🇲🇦

The African record is held by Cameroon with a run of five between 1982 and 1990 👀 pic.twitter.com/c1zSERUldU

After playing four matches at the FIFA World Cup, Morocco have shown a clear pattern that they are not a team dependent on individuals. This makes them a dangerous proposition for their rivals. Belgium and Spain are currently ranked second and seventh on FIFA rankings, respectively but couldn’t find their way past the stubborn Morocco defence.

And that has been their theme. The team have scored five goals so far with four different goal scorers while three players have provided one assist each. The top scorer has been Youssef En-Nesyri, who has scored two goals, including the winning goal against Portugal.

However, if one had to choose a star, it would be their defensive leader Romain Saiss. The centre-back has made 52 clearances, the most by any player in the FIFA World Cup. He has marshalled the defence well and is one of the critical reasons opposition has been kept at bay.

But all in all, they have relied on collective brilliance, with every one of the starting 11 helping out defensively, especially Hakim Ziyech and Sofiane Boufal, who have been brilliant at blocking the passing lanes in the middle of the park.

📊Sofiane Boufal with the most successful dribbles and Romain Saïss with thr most clearances in the round of 16 of the @FIFAWorldCup 🔥🇲🇦 pic.twitter.com/8mhWu28Sd6

What makes Morocco apart from other teams is one unique approach. Before the FIFA World Cup started, the Moroccan FA allowed the players’ families to stay with them. This was done after a request by Regragui. And the investment has paid off as Morocco have gone on their best run ever at the World Cup.

The image of Achraf Hakimi celebrating with his mother has been seen by many on social media. During the penalty shootout, videos of goalkeeper Yassine Bounou’s mother praying and the images of Boufal hugging his father after the win have also been shared widely.

This would also force the other football federation to allow family members as they are the closest to a player and can help him prepare for a match mentally.

For now, Morocco’s dream is still alive, and when they take on Portugal at Al Thumama Stadium, the Atlas Lions will be hoping their magical run continues.