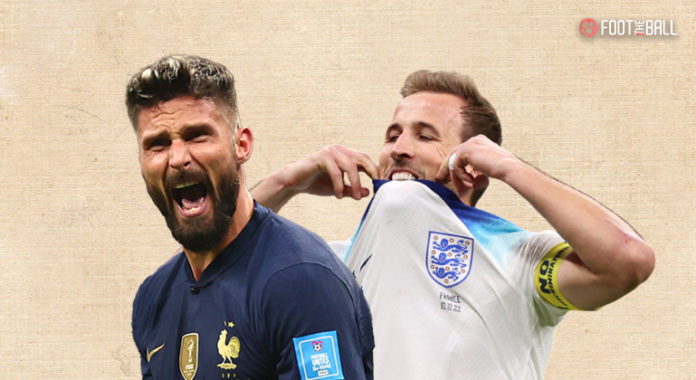 It was the prerogative of Al Bayt Stadium to host the first-ever men’s World Cup knockout encounter between England and France but the prevailing feeling was that for an encounter of such magnitude, it was happening too early.

The whims and wishes of the draw are perhaps decided by the footballing gods, but all is not fated, and it was Didier Deschamps’ France who seized the tie to shape their destiny, as they defeated the Three Lions 2-1, albeit marred by some controversial refereeing decisions.

Aurélien Tchouaméni made the first move with his resounding strike from distance in the 17th minute. But the French advantage was cancelled by Harry Kane’s 54th-minute penalty, before Olivier Giroud reinstated it by finishing off Antoine Griezmann’s delightful cross in the 78th minute.

Kane was given another chance to equalise from the spot and become his country’s leading male goalscorer but the English captain skied his attempt in the 83rd minute.

When the rapid French break, it stays a rapid break

England had started strongly but they didn’t make merry for long as Les Bleus quickly reclaimed the steering wheel.

Soon enough, Ousmane Dembélé and Griezmann, enjoying the chemistry of best friends, started to vibe and combine on the right flank while breaking, with the latter being the mastermind and the former eventually sending in two delightful crosses for Giroud, although nothing became of it.

Moments later, Dayot Upamecano, just outside his box, tore into Bukayo Saka, which many thought was a foul, but France’s number 18 didn’t and with him, France were motoring, yet again. The Bayern Munich defender progressed the ball leftwards to Kylian Mbappé, who leaving Declan Rice on the floor, slipped in-field and found Dembélé.

The move seemed to slow down with the ball recycled to Tchouaméni, but he woke up everyone who was starting to think that the danger was averted when he clubbed one from 25 yards out into the corner of Jordan Pickford’s goal.

When it was said earlier that Tchouaméni’s thunderstrike woke England up, it was also meant quite literally because after going down the Three Lions began brewing the tea and their influence on the game increased, offensively and defensively.

Primarily roused by the nifty feet and agility of Saka, the English had tested Hugo Lloris thrice by minute 30, with two shots coming from his club teammate Kane.

The Three Lions, on the back of numerous controversial calls, especially those involving Saka, finished the first half as the better side.

What was bubbling in the latter stages of the first half, came to fruition in the second as England stormed out of their changing room and stamped their authority, flooding the French with incursions as well as frustrating them when off the ball.

The liveliest player on the field, Saka, was at last validated by the referee when his wiggling run into the French box was cut short by Tchouaméni’s foul, and the Three Lions were awarded a penalty. There was never any doubt that Kane was going to miss from the spot. Game on!

England was winning the midfield battle, especially in the second half. They had successfully tackled the much-talked-about match-up of Mbappé v Kyle Walker as a collective unit, and kept the sparkling forward silent.

But, having spent a chunk of the second in frustration, out of the blue, Les Bleus emerged. Around the 76th minute, finally, Mbappé found some space and funnelled a lobbed pass to his counterpart Dembélé who set up Giroud but his shot was saved by Pickford.

The delivery from the resulting corner was cleared, but only for it to again reach Griezmann, France’s best player of the night, who located Giroud’s head with his perfectly-curled cross.

Les Bleus’ all-time highest male goalscorer made no mistake this time, as he leapt high and slammed home France’s second.

Moments later, in the 81st minute, Theo Hernández spilt the milk over France’s good work as, without any good reason, he jostled the newly-brought-on Mason Mount into the ground giving away a penalty. In keeping with the theme of the game, the referee Wilton Sampaio had denied any wrongdoing but VAR corrected his error.

Remember when it was said that ‘there was never any doubt that Kane was going to miss from the spot’? That theory didn’t hold water the second time, as Kane happily wiped off Hernández’s split milk by blasting his spot-kick over Lloris’ goal.

With the miss, he also wiped off the chances of England keeping their 100% win rate against France in the World Cup safe.

Deschamps’ side managed the remaining minutes dexterously, not giving the Three Lions many sniffs of their goal, barring an inviting free-kick in the last minute of injury time.

However, Marcus Rashford couldn’t imitate Teun Koopmeiners, and sealed France’s date with Morocco in the last four with the last kick of the ball that brushed the top netting of the Lloris’ goal.

Giroud holding his heart and sighing with relief after the final whistle was an apt reflection of France’s victory; perhaps not thoroughly but warranted just enough.