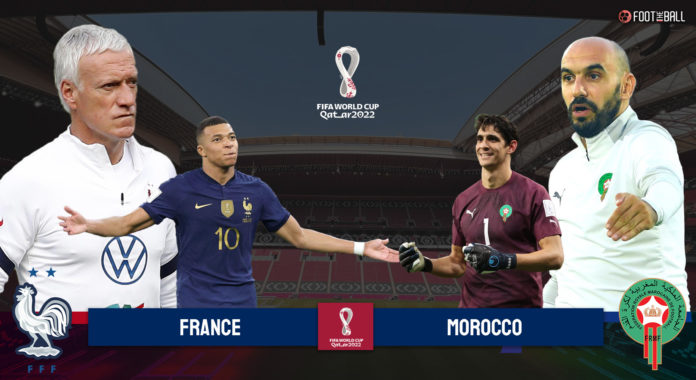 It has been over sixty years since a nation defended their title at the FIFA World Cup. However, all that could change in Qatar 2022 if France managed to go all the way. The 2018 champion defeated arch-rivals England 2-1 to reach the semifinals. However, standing in their way before the finals are the fairytale story of this tournament in Morocco.

The Atlas Lions have already created a record by becoming the first African team to reach the semifinals. And the Morrocans did not have it easy, as they defeated Spain and Portugal in consecutive rounds. However, they now face their sternest test in the form of Les Bleus.

France were among the favourites before the World Cup and have proven their credentials well in the tournament. The attacking duo of Kylian Mbappe and Olivier Giroud, who were crucial to their win in 2018, are still going strong, contributing a combined nine goals.

Before the World Cup, the biggest blow to France was the injury to star midfielders such as N’Golo Kante and Paul Pogba. The duo was the bedrock of France’s success in Russia, and their absence was seen as a significant chink in France’s armour. However, Aurelien Tchouameni and Adrien Rabiot have been impressive, ensuring the team has control of the ball and the game’s flow in the middle of the park.

1 – Morocco are the first African team to qualify for the semi-final of a World Cup tournament – each of the previous three African sides to reach a quarter-final were all eliminated at this stage (Cameroon in 1990, Senegal in 2002 and Ghana in 2010). Magical. pic.twitter.com/7rq8Yrn04L

And despite the horrific injury of Lucas Hernandez, the mantle at the left-back position has been taken up by his younger brother Theo. Captain Hugo Lloris was at his imperious best in goal, making six saves and helping his team get over the line.

On the other hand, Morocco are a team sky-high in confidence. The Atlas Lions have defeated Belgium, Spain and Portugal, who are among the top 10 in FIFA Men’s rankings. Morocco’s incredible run has been built on their superior defence, which is yet to concede a goal from their rivals (the only goal they have conceded was an own goal).

After the first match of the campaign, France have fielded the same starting 11, with only Jules Kounde replacing Benjamin Pvarad after the first match. In fact, Didier Deschamps is so sure about his starting 11 that he only made one substitution in the game against England. Moreover, France are also injury free and also have no suspension due to the accumulation of yellow or red cards. Therefore, and if circumstances remain the same, Deschamps will likely field the same starting 11.

However, if we talk about Morocco, the situation could not be more different from the French camp. Walid Cheddira, who was sent off in injury time against Portugal, will miss the clash. In addition, the defensive duo of Nayef Aguerd and Noussair Mazraoui missed the clash against Portugal due to injury. However, both are expected to be fit in time for the semifinals. This will be a massive relief for manager Walid Regragui who is likely to be without captain Romain Saiss who was stretchered off the field after 50 minutes against Portugal.

With five goals to his name, Kylian Mbappe is the outright top scorer in the 2022 FIFA World Cup. The 23-year-old is just starting to hit the peak of his career and has brought his best to the tournament. Mbappe already has nine goals to his name, one more than Cristiano Ronaldo and Neymar and one behind Lionel Messi. And partnering him in his exploits is Olivier Giroud, who is getting better with age. He has scored four goals which, include the winning goal against England.

Morocco have been a team built on teamwork rather than individual brilliance. However, there is no denying the impact of goalkeeper Yassine Bounou. The shot-stopper who plays his club football in Sevilla has been the most in-form goalkeeper in Qatar and has only conceded one goal.

He has also made several key saves, especially against Spain and Portugal. As a result, it will be difficult for the Mbappe-Giroud partnership to score past him when the two teams finally meet.

3 – Yassine Bounou, who made his 50th appearance for Morocco tonight, is the first African goalkeeper to record three clean sheets in a single edition of the World Cup. Heroic. pic.twitter.com/xW3DEN6LAL

Betting against Morocco is a mistake many have made in the World Cup. The Atlas Lions come into the semifinal after knocking out two favourites. And when they face France, they will have every right to believe they could qualify for the final.

However, France are also the most potent attack, and if anyone can find their way past such a stubborn defence, it could only be Les Bleus.

Morocco also have to deal with lots of injuries, and if Aguerd and Mazraoui can return to the squad, Morocco will be more than a match for France and create other records.

FootTheBall predicts a 1-1 draw after 120 minutes with Morocco to win on penalties to become the first African team to reach the final.