A chance at redemption 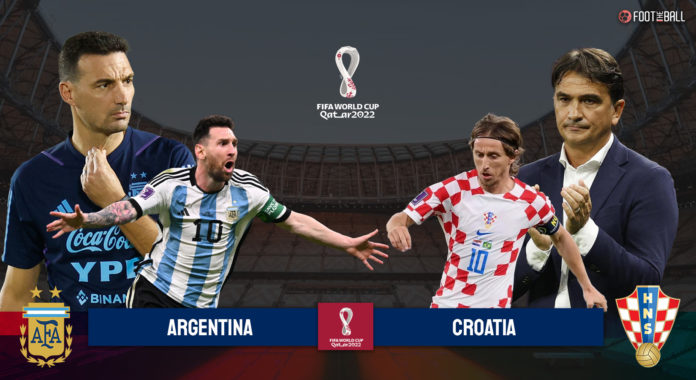 Having struggled through colossal battles of their own, Argentina and Croatia will meet at the Lusail Iconic Stadium in the semi-final of the men’s FIFA World Cup on Tuesday, in what threatens to be another classic clash.

Lionel Scaloni’s Argentina would take a lot of heart and confidence from their epic victory over the Dutch on penalties, especially because of the manner in which events transpired.

For more than 80 minutes, La Albiceleste executed their primary plan smoothly, finding enough outlets to score twice while collectively dismissing away any and all questions that the Dutch asked of Argentina.

However, in the ending stages of the tie, the Argentinians lost the plot as the Oranje basked in mayhem and charted an incredible comeback.

But the fact that, in a heavily enflamed encounter, Argentina could gather themselves and rise again after the Oranje onslaught to progress to the last four, would be an immense belief-booster for Scaloni’s side.

Argentina’s journey in this World Cup has been fairly linear in many ways. After the shock defeat against Saudi Arabia, they’ve perennially been playing catch-up with all of their matches being must-win, and to their credit, La Albiceleste have uplifted their standards with each passing test.

La Albiceleste have reached the last four of the World Cup on four occasions without ever losing at this stage. Scaloni’s team will want to stay on the sunnier side of history, but the assignment on their hands is strenuous, and yet again they’ll have to raise their ceiling.

On the other hand, in a World Cup of the underdogs, where Morocco have become the sweetheart of the football world, Zlatko Dalić’s Croatia have also definitely not winced away from punching above their weight.

Their latest casualty was Tite’s Brazil whom Croatia, with their tenacity, compact organisation, and downright denial to yield, forced to dance to their tune.

Unsurprisingly, Dalić had set up his side to play out a draw and take the game as deep as possible. After a long 106 minutes of perfect execution, Neymar tried to spoil Vatreni’s party with an artistic goal. But, somehow, Croatia found an equaliser to take the game to their comfort zone – the penalty shootout, where they won 4-2.

After defeating Brazil, Croatia matched Germany’s record of winning four penalty shootouts in the men’s FIFA World Cup without losing any. Just like how it was in 2018, Croatia’s journey to the semi-final has now involved two consecutive wins in the tiebreaker.

The Vatreni are a superbly-drilled, well-organised unit, where each cog has tremendous clarity regarding their role. What’s more, the supreme ball-playing abilities of Croatia’s midfield and defence give them the superpower of controlling the tempo of the game and slowing it down at will.

Going into their third men’s World Cup semi-final – only Germany have featured in more since Croatia’s arrival to World Cups in 1998 – Croatia will depend on these well-known strengths of theirs, which have brought them heaps in the last two World Cups.

Starting left-back Marcos Acuña and right-back Gonzalo Montiel, who’s made a habit of replacing Nahuel Molina from the bench, and will not be available for selection due to suspension via yellow card accumulation.

With injury concerns looming over Rodrigo de Paul and Ángel Di María, both of them didn’t feature for the entirety of the fixture and their conditions will have to be assessed.

Zlatko Dalić does not have any suspensions to cope with. Fullback Josip Stanisic remains a doubt, but he is not a starter for Croatia.

Bruno Petkovic, who scored the equaliser against Brazil, might have a look in the starting XI over Mario Pasalic.

Ángel Di María offers something to Argentina’s attack that no other forward, including their captain, can offer – width and velocity on the wings. Off late, the Juventus man hasn’t been fully fit and has featured sporadically.

Despite his limited game time, Di Maria flaunts off the third-highest xA (0.5) in his team and he’s only behind Lionel Messi in dribbles completed (9) and chances created (6). La Albiceleste will hope that their number 11 spends more time on the field than off it because they’ll dearly need his creativity and acceleration out wide to break down a crude Croatia.

Dominik Livaković has been the talk of the town for his heroics between the sticks. The 27-year-old has been Croatia’s unbreachable wall, whose motto of the tournament has been “​Thou Shall Not Pass” as Brazil and Japan remorsefully found out.

He’s in the esteemed list of rare goalkeepers who have saved three penalties in a World Cup penalty shootout. Against Brazil, he made an incredible 11 saves, before leading Croatia to victory on penalties. He’ll need to continue his A-game against Argentina as well if the Vatreni wants to reach their second successive men’s World Cup final.

4 – Dominik Livakovic has saved four penalties during World Cup penalty shoot-outs, the joint-most of any goalkeeper in the tournament's history. Prescience. pic.twitter.com/T3BJlDCQ37

The quality and styles of both teams suggest that it’s going to be really tight contest, with a fascinating tussle in the middle of the park. It’s hard to predict with any conviction which way the game would tilt, such are the margins. Even historically, there’s been no clear winner between the two, with both teams winning twice against the other. Still, it will be Argentina who enter as favourites and Croatia as underdogs, which the latter would relish.

FootTheBall predicts a 2-1 win for Argentina.