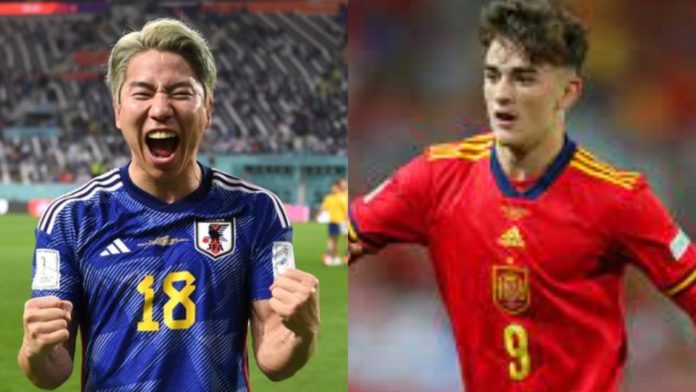 The fourth day of the FIFA World Cup brought more surprises and shock as four matches were played. Across these games, we saw everything, an entertaining goalless draw, a shock win, a proper thrashing by a top team, and a proper entertaining close win. The results of these matches have thrown the tournament wide open as some teams have strengthened their qualifying chances while others are hanging by a thread.

So, we will bring you the recap of day four of the FIFA World Cup.

Japan pulled off a shock win of their own as they defeated four-time winner Germany 2-1 at the Khalifa International Stadium, overturning a 1-0 deficit with second-half goals from Ritsu Doan and Takuma Asano. This is the second consecutive defeat for the Germans at the FIFA World Cup, with their previous loss coming in the third match of the 2018 FIFA World Cup against Japan’s neighbours South Korea.

Germany started the match positively, executing their high press style to perfection. And their efforts were rewarded when they earned a penalty in the first half, which Ilkay Gundogan duly converted. Die Mannschaft continued to create chances and scored their second goal just before the first half ended, but the goal was ruled out as Kai Havertz was ruled offside.

However, Japan were a changed side in the second half as they started to play on the counter-attack against Germany’s high defensive line. Japan were rewarded for their effort in the 75th minute when Ritsu Doan scored for the Asian team. That made the German nervous, who started to search for the winning goal. And Japan were ready for it as a long pass found Asano, who controlled the ball with a magical first touch before beating Manuel Neuer at his near post.

Takumi Asano with a fine finish from a very tight angle

Meanwhile, in the other match of the group, Spain put any doubts of a second shock win to rest by thrashing Costa Rica 7-0. Spain’s game was played immediately after Germany’s loss, and ‘La Furia Roja started the match on the front foot and raced to a 3-0 lead in the first 30 minutes. The 2010 champions were a level or two above the North Americans.

It started as Dani Olmo and Marco Asensio added two goals in the 21 minutes. The Costa Ricans then conceded a penalty after Oscar Duarte brought down Jordi Alba inside the penalty box. Ferran Torres scored the resultant penalty to make the score 3-0. He would add another in the second half. However, the most impressive goal came next as the 18-year-old Pablo Gavi scored the sweetest volley to become the youngest scorer in the World Cup since Pele in 1958.

After the two matches, Spain and Japan are on three points, and another victory for them will make their qualification almost sure.

Takuma Asano did not even start the match but came on as a substitute in the second half and helped Japan script a famous win. After Japan levelled the game, Asano got to the end of a long ball and controlled the ball with a brilliant first touch. Defender Nico Schlotterbeck did not leave himself in glory and was easily outmuscled by Asano, who produced a neat finish past Neuer. The Japanese held on for the lead to produce another shock win in the World Cup.

For Spain, their teenage star Pablo Gavi star starred in the match. The Spaniard played the entire game with an 89 per cent passing accuracy, scoring one goal, providing one assist, making 70 touches, and completing five recoveries. Spain ended the match with more than 1000 passes and possession of 82 per cent.

No doubt for Golden Boy🔥🌟 pic.twitter.com/tgubdO5YFY

Meanwhile, for Belgium, their goalkeeper Thibaut Courtois came to the party. Canada were electric in their match against the Red Devils. The Europeans were on the back foot after Yannick Carrasco’s handball gave Canada a penalty in the 11th minute. However, Courtois, the hero of the Champions League final, saved the resultant spot kick to keep his team in the game and helped them to win the match 1-0.

The 2018 FIFA World Cup finalists also had a far from the perfect start as they played a goalless draw with Morocco. However, that doesn’t mean that match was a tedious affair, as there were several clear chances. The Vatreni should have capitalised on their momentum and now have two challenging games against Belgium and a fearless Canada. If Croatia do not find their finishing boots, there is a chance that they could be eliminated in the group stage.

However, while Croatia managed to get one point, Germany couldn’t even manage that as they succumbed to a defeat in their opening match. To make matters worse, their next game is against Spain, a top-form team. Hansi Flick knows that anything less than a win against Luis Enrique’s men will make their qualification chances difficult, and a defeat will eliminate them from the tournament.