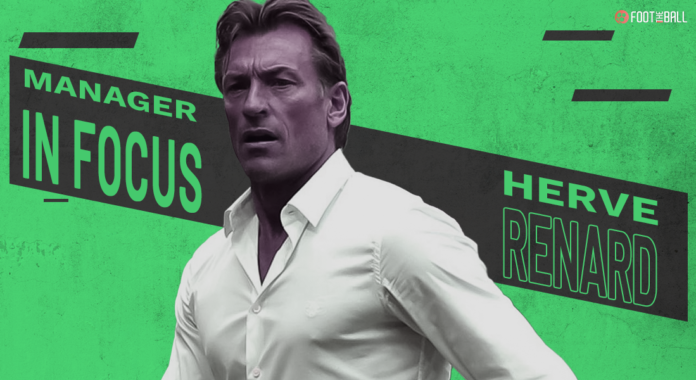 Hervé Renard, Saudi Arabia’s mastermind behind the 2-1 colossal victory over Lionel Messi-led Argentina, is a man who has traversed the footballing lands ranging far and wide from Europe and Africa to southeast Asia and now the middle-east.

Erstwhile his works were acclaimed perhaps only in the niche circles of non-Western football followers, especially among African fans. But after breaking La Albiceleste’s 36-match unbeaten run this Tuesday – a mission that proved impossible for heavyweights such as Italy and Brazil – Renard and his Green Falcons have certainly declared themselves globally and booked a special place in the football World Cup folklore.

Who is Herve Renard?

Renard’s longstanding managerial career of over 23 years has been topsy-turvy and multi-dimensional, to say the least. At 30, after his playing career was cut short by a knee injury, the Frenchman decided to tip-toe in football management. In 1999, his first coaching gig was at Draguignan SC, a minor club in the south of France, but at the time, he was also working as a cleaner; such was his resolve to make it big in the sport.

Renard’s life changed with he met and worked for Claude Le Roy, for whom he harbours utmost respect and admiration, at Shanghai Cosco in 2002. Renard also briefly operated as his fellow countrymen’s understudy at Ghana and Cambridge United between the 2003-2004 period.

While his time in club football at Sochaux and Lille in France, Cambridge United in England, and Nam Dinh in Vietnam, among others, hasn’t been dazzling, it is the international stage he’s conquered by repeatedly delivering David-over-Goliath-style accomplishments.

He’s the first man to win the African Cup of Nations (AFCON) twice with two different countries. First, he did it with Zambia in 2012, when all the odds were against them, and in 2015, with a well-balanced Ivory Coast side.

In 2018, under his stewardship, Morocco qualified for the World Cup after a 20-year-long wait. That year, Iago Aspas, supported by VAR, saved Spain’s blushes and interrupted Renard’s plans of causing a seismic upset at the biggest platform.

Now, Renard has been with Saudi Arabia since 2019 and has succeeded in halting the merry-go-round of managers at the Green Falcons as well as quelling the doubts that were bubbling regarding this ability to perform well beyond Africa.

Japan fans were hyped after their historic win against Germany🥳@FIFAWorldCup #Qatar2022 #FIFAWorldCup pic.twitter.com/YYiYvAPRAu

‘Argentina are the favourites to win the World Cup; this is Messi’s time.’ These words consumed all of the football media in the build-up to the tournament in Qatar. Put yourself in the boots of a manager, and imagine the hefty task of getting your team ready to take on Lionel Scaloni’s team of world-beaters. Not the most enjoyable trail of thought, right?

Renard would beg to differ, and his team players would tell you so, as they did after their incredible win. Abdulelah al-Malki, the Saudi Arabia midfielder, provided a nugget into Renard’s abilities as a superior motivator. The 28-year-old said that their “crazy” manager’s words at halftime inspired them to such a degree that his teammates were brimming with self-confidence and were ready to “eat grass.”

The Frenchman is also renowned to add touches of empathy and personalisation in his man-management. Former Cambridge United player, Shane Tudor told Sky Sports that during a difficult time in his career, when he was recovering from a serious groin injury, Renard’s gestures made “a big impact” on him. “When I came back for rehab to do the running on my own, he would run with me before he began the session with the rest of the players. I just thought that was brilliant,” he said.

During the 2012 AFCON in Gabon, Renard took his Zambian squad to the rescue operation site of the 1993 plane crash where 18 Zambian players had tragically died, in search of some powerful symbols as well as perspective. The tournament finished with the Chipolopolo lifting their first and only AFCON title.

Many experts have described Renard’s tactics against Argentina as bold and audacious, and perhaps understandably so. There’s a valid argument in stating that employing a high press and a high defensive line supplemented with an offside trap against Scaloni’s side is going against the rules of realism. However, the high reward which was the underlying factor behind all these high risks sumptuously paid off.

Moreover, Renard lives and breathes by these tactics, and as you would have understood by now, his stubbornness in sticking to his style of play, no matter the size of his adversary, is guided by his belief in himself and his players.

But his ideas aren’t grounded in idealism. To materialise them on the field, he demands certain levels of practice and fitness from his players.

John Ruddy, another of his players at Cambridge United, told The Guardian that his pre-season under Renard “was and still is the hardest one I have ever done.” He also said that “shaking like a dog” after training was a commonality for him and his teammates. Interestingly, in these sessions also, Renard characteristically trained alongside his players to boost their morale and push their boundaries.

Considering his ambitions, despite sending shockwaves of seismic degrees in the world of football, Renard would not wish to stop just yet. He will, undoubtedly, rally his players to reach the knockout stages in Qatar.