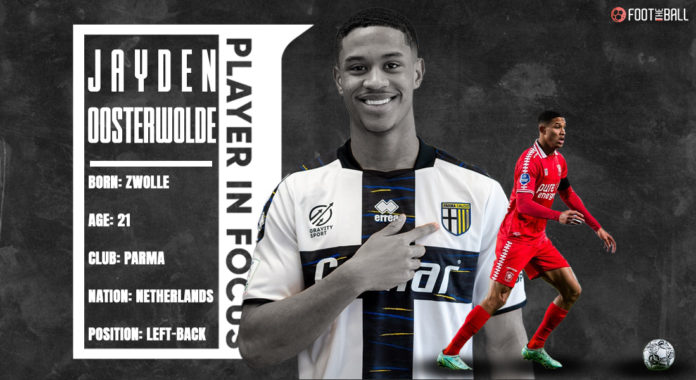 The Netherlands announced their return to the world stage in style at the 2022 FIFA World Cup, reaching the quarter-finals, where they lost to Argentina by the barest of margins. This was a spirited performance by the Oranje, especially after failing to qualify for the World Cup in 2018. The Netherlands have an exciting crop of young players who will be in their prime in two to three years. Left-back Jayden Oosterwolde has a high chance of becoming a part of the Dutch golden generation.

A product of FC Twente’s youth academy, Oosterwolde is one of the most exciting players. Capable of playing as a left-back, left-midfielder, left-winger and centre-back, he is one of the most sought-after players and is bound to move to a club in the top five leagues.

While he is playing in Serie B in the current season, his performance has been so brilliant that European clubs are ready to add him to their ranks, deeming him prepared to play in the top leagues.

So, who is Jayden Oosterwolde, and how good is he?

How good is Jayden Oosterwolde?

Jason Oosterwolde started his career at the local club ZAC where he played till 2012. Here, he came into the view of FC Twente’s scouting network. He wasted no time and joined the club, where he spent the next eight years progressing through the various youth ranks.

By the 2017-18 season, he was given a debut in the under-17 and under-19 teams, making a total of seven appearances. The following season he was promoted full-time to the under-19s making 14 appearances while also representing the club in the under-18 Netherlands Cup.

He played as a left winger in the preliminary matches for the under-19 Eredivisie, where he scored five goals in as many games. After playing another season in the under-19 team, he finally got his senior team debut on September 12, 2020, against Fortuna Sittard. Oosterwolde wasted no time showcasing his talent, assisting Queensy Menig for the opening goal.

His debut goal came a month later against Willem II in a 3-0 win. The following season he made 14 appearances for the team. Then, that winter, Parma came calling, and Twente sent him on loan to the club with an obligation to buy. And it took them only five appearances to see his talent as they made the deal permanent.

Oosterwolde has made rapid strides this season, making 18 appearances and scoring one goal. The youngster has been one of the few positives in Parma season as they are currently in ninth, nine points adrift of the automatic promotion places.

In the current season, Oosterwolde has made 18 appearances and has been Parma’s best defender. The 21-year-old has made 1.8 successful tackles per 90 minutes, with a success rate of 70.5 per cent, the most on his team. He also leads the team in interceptions and dribbles per 90 minutes.

He has also made at least one key pass per 90 minutes but still has not provided any assist. It is because of a lack of quality strikers at Parma that has been unkind to him as they failed to finish even a single chance.

His duel numbers are also impressive, as he wins 4.4 of them per 90 minutes. Out of these, 3.7 are won on the ground, while the rest are won in the air. However, his stats, especially in the attacking department, suffer heavily because his teammates are on a different level than him.

Analysing his heatmap from Sofascore, Oosterwolde covers every part of the left flank. However, his ability to use the indie channel makes him even more dangerous.

Oosterwolde works in tandem with the winger using one-touch passing. If the winger uses the inside channel, Oosterwolde drifts on the wing either to deliver the cross if he has the ball or to draw a defender with him if he does not, which opens up space for the winger to exploit.

As he had played left winger in his youth career, Oosterwolde also has brilliant ball-carrying abilities and a knack for delivering the quality ball into the box. His height also helps him quickly cover huge ground and win aerial duels.

However, he could use his physique more often to hold off opponents and win second balls. In addition, since he is an attacking full-back, he has a knack for being out of position during counterattacks, which leaves Parma vulnerable and has also led to goals.

Despite playing in Serie B, Jayden Ooosterwolde is being chased by several clubs. Fenerbahce, Southampton and AC Milan are all in the race to add the talented full-back to their ranks. Oosterwolde has also started to follow the Instagram account of Fenerbahce, which has led to rumours that he may be inclined to join the club.

Southampton, meanwhile, are in dire need of players who can help them turn around their dreadful season. The Saints are currently bottom of the table and require defensive reinforcements after conceding 34 goals, the most in the league.

Turkish top club pushing as they see Oosterwolde as important option but there’s no agreement, Parma hope to keep him. pic.twitter.com/DP09eIDiaF

It remains to be seen where he finally lands, but it indeed will offer him a football that will be far more competitive than Serie B, helping him elevate his game further as he looks to improve as a player and hopefully get a look in the Netherlands national football team.

He can only perform at his best, and teams will come for him.