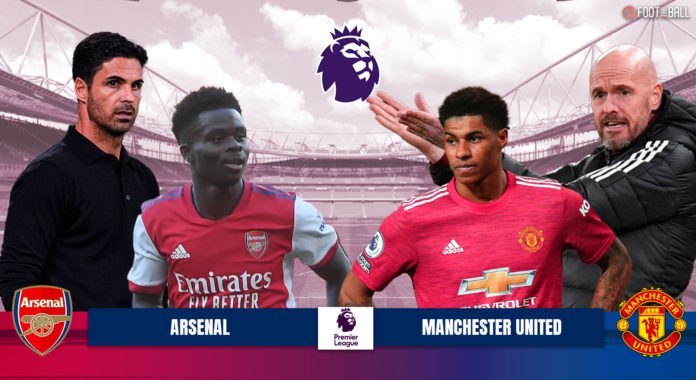 Arsenal can do no wrong in the Premier League title race. The Gunners are looking more like a champion with every match, and with their recent away win over Tottenham Hotspur, Mikel Arteta’s men find themselves with an eight-point lead at the top of the table. Arsenal fans would have been happy with a top-four finish at the start of the current season. However, what has transpired over the season is a testament to the work Areta has done with the squad.

Now they face the only team on the same level of form as them, Manchester United. Arsenal have an eight-point lead because United defeated their city rivals Manchester City 2-1 in their last match. United have been in top form since the end of the FIFA World Cup, winning four games, drawing one scoring ten and conceding just two goals. Like Arteta, Erik Ten Hag has also started getting the best out of his players.

Despite only having one player in the top 10 Premier League goal scorers, Arsenal have scored the second-most number of goals which shows that everyone across the team has contributed to the cause. Defence has been a significant concern at the club for years. However, this season, the team has finally found the perfect balance of keeping ten clean sheets and conceding the second-least goals in the entire league.

On the other hand, Manchester United look like a changed side post the World Cup, with every player executing his role to perfection. Their 2-1 win over City also showcased United’s mental resilience as they came back from a goal down to win. In addition, they also managed to stop the rampant Erling Haaland from scoring a goal at Old Trafford. However, Arsenal are a team loaded with multiple goal scorers, which will be a big challenge for United’s defence.

Next Sunday: Arsenal vs. Man Utd

Who you picking to come out on top? 🤔 pic.twitter.com/R6MpD7LWxX

Arsenal are still without the services of Brazilian striker Gabriel Jesus who is still recovering from a knee injury. However, according to reports, he could return by the end of February. Mohamed Elneny is also without a knock but is expected to be fit for the clash. Reiss Neilson is the only other injury, and the rest of the squad will be available for selection.

Defender Lisandro Martinez was out with a suspension against Crystal Palace but will be back for the big clash. However, in a vast blow, Donny van de Beek has been ruled out for the rest of the season after suffering an anterior cruciate ligament injury against Bournemouth. He will join centre-back Axel Tuanzebe who has also been ruled out injured for the rest of the season. In addition, Jadon Sancho is also back after completing an individual program aimed at helping him return to form.

As mentioned earlier, Arsenal have not been reliant on a single player this season. However, if one had to pick, then Bukayo Saka would be at the top of the list. The talented youngster has scored six goals and provided seven assists so far. Moreover, Saka has been the creator-in-chief creating havoc for the opposition from the right flank. In the match against Tottenham, his shot was deflected into the goal by Hugo Lloris while he created the second one for Martin Odegaard.

On the other hand, Marcus Rashford has rediscovered the devastating form that made him one of the top players in the league in the first place. The Englishman has scored four goals in four matches and has been United;’s most devastating attacker. His display against Manchester City was one of the best as he constantly pressed the defenders high up the pitch and marked the occasion with a goal that turned out to be the winning one.

Despite amassing an eight-point lead, Arsenal cannot feel confident as they have yet to face Manchester City, making the match against United very critical. The Gunners have been imp[eccable but meet a team that looks most likely to take points off them.

Moreover, Arsenal lost only one match this season and came against United in September. And Arsenal will be raring for revenge which, helped by the crowd at Emirates Stadium, might be too much for the visitors to handle/

FootTheBall predicts a 3-1 win for Arsenal.