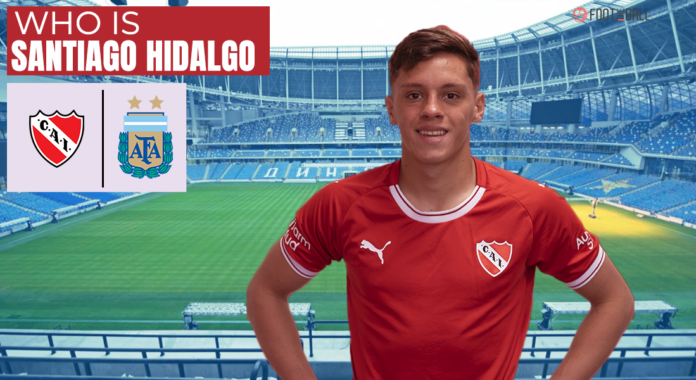 Fine wine, romantic tango, and an unparalleled frenzy for football are a few things Argentina is famous for. In this list of Argentineness, we might as well add a sub-section of ‘world-class forwards with a low centre of gravity and a knack for dropping deep and getting involved in the playmaking’ under the broader category of football.

Even when considering contemporary times, the directory is long. There’s obviously Lionel Messi and former Independiente graduate Sergio Agüero. Then came the likes of Paulo Dybala, Lautaro Martínez, and Ángel Correa, among others, and the latest star in this category is Julián Álvarez. Goes without saying that, like everything else in Argentinian football, the shadow of Diego Maradona looms large over this list as well.

The potential of the left-footed, 17-year-old, Santiago Hidalgo, who stands at 1.71m, can threaten to extend this peculiar Argentine legacy. He already made his senior debut for Independiente earlier this year and was included in The Guardian’s class of 2022 for the top 60 talents in the world of men’s football.

Who is Santiago Hidalgo?

Hidalgo left the comforts of his home in Santiago del Estero at a tender age to construct a career in professional football, joining San Lorenzo in Buenos Aires before moving to Independiente at the age of 11.

Slow at the start, when the Argentine picked up pace in Independiente’s youth ranks, it was rapid. In a matter of months, he progressed from playing in the seventh division to the first, making his debut on July 16, 2022. He’s now being touted as ‘the promise’ of El Rojo.

While witnessing La Scaloneta’s jubilant journey in Qatar, the confident youngster told his parents that they’ll be watching him defend Argentina’s crown in the next tournament in 2026.

Hidalgo made his senior debut against Rosario Central, coming on as a second-half substitute. In the following fixture as well, he was given 45 minutes from the bench, before he was sent back to Independiente’s Reserves.

In his first season for the Reserve team, the 17-year-old scored on six occasions and provided one assist. The striker has also impressed during his time with Argentina’s under-17 set-up.

At Independiente, Hidalgo is a source of great excitement but, knowing the fragility of the football industry, the management wants to keep a wise head and not try to speed up the 17-year-old’s growth by force.

A fan of Ronaldo Nazário, Hidalgo also takes inspiration from Agüero and Karim Benzema, and calls himself similar to Álvarez and Martínez in style but outsiders say that his skillset and positional preference put him closer to France’s Antoine Griezmann in the footballing canon.

Speedy with nifty footwork, the 17-year-old initially started out on the wing but, for now, he’s found his abode in the centre of the attacking third.

With a sharp understanding of the game and commendable technical aptitude, to maximise his potential, Hidalgo likes to retreat and integrate himself into the gameplay frequently. Although relatively short in height, the forward has a strong header on him to go along with his decent physical strength.

As any smart professional would, Hidalgo is aware of his weaknesses and is keen to improve them. “I want to continue improving my punch with my right foot and we always have to work on finishing,” he commented.

Promising as he is, Hidalgo has only made two senior appearances from the bench for El Rojo at the point of writing, after having signed his first professional contract with them in January 2022, which ties him at there until 31 December 2024.

Although he wants to “win something with Independiente”, his dream is to “play in Europe” as well as wear the esteemed Sky and Blue jersey one day.

If and when the 17-year-old brightens his future in real-time that currently looks bright in the imagination, European clubs won’t hesitate from matching his $15m release clause to sail him across the Atlantic.