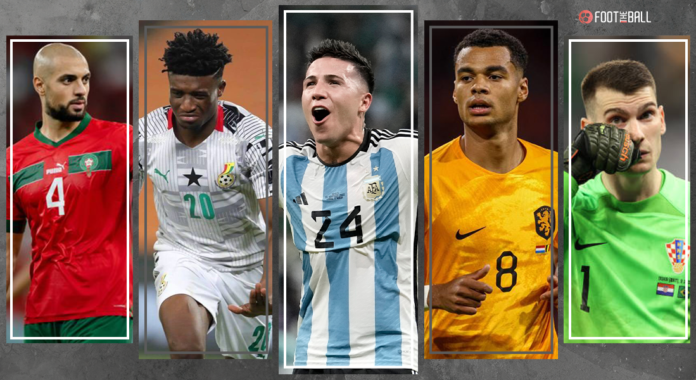 In a way, the FIFA World Cup is a global talent show of the grandest proportions where players from across the world, many of them unfamiliar to the common fan, display their skills and abilities to the footballing realm. In each edition, new stars come to light or erstwhile ordinary players suddenly become extraordinary, and what ensues is a fascinating post-World Cup scrap among clubs to sign these latest introductions, often at inflated prices.

FootTheBall lists 10 such players whom the footballing world is either perceiving from a new lens or has recently become accustomed to. The values of these hidden gems and rare finds have skyrocketed in the last month.

This World Cup was incredible for Argentina. This World Cup was also pretty great for Brighton. Their Colombian representatives Pervis Estupiñán and Moisés Caicedo held the Seagulls in good light but it was Argentina’s Alexis Mac Allister who brought them the greatest glory.

It wasn’t a coincidence that after the arrival of Allister, alongside Enzo Fernández, Argentina’s midfield started singing a new tune. Featuring in La Albiceleste’s all six victories, Allister scored the vital opener against Poland and played the final ball for Ángel Di María’s sumptuously-worked goal in the final.

Beyond the bigger moments, his gusto and industry were critical in winning battles in the middle of the park, making the most blocks in the whole tournament (13) and regaining possession on 40 occasions.

Brainy as Brighton’s management is, just before the World Cup, they tied the 23-year-old to the Amex till 2025. But it wouldn’t be a shock at all if soon a Champions League club offered Brighton a bulky cheque for the Argentine.

If you’ll make child’s play of stepping in the shoes of Cristiano Ronaldo –  Portugal’s finest and one of the greatest finishers to ever play the game – at a World Cup knockout game by becoming the youngest player to net a hat-trick at a World Cup since 1962, your market value is obliged to hit the roof.

The sniper was off-colour in the following game against Morocco but this hasn’t been the norm as he has scored nine goals in 11 appearances for Benfica. The Eagles’ routine of minting huge sums of money by producing world-class players looks set to continue.

Enzo Fernández had just featured three times for La Albiceleste coming into the World Cup. By the time the tournament concluded, he was one of the first names on Lionel Scaloni’s teamsheet, had helped revitalise Argentina’s midfield, and won the Young Player of the Tournament award.

With his supreme technical gifts and endless stamina, Fernández was a dream at centre midfield for Scaloni, offering control and creativity in possession and defensive firmness off it. The Benfica man sent the sixth-most passes into the final third (43) as well as won the third-most tackles (15) in the tournament.

Brighton had a bright World Cup but Benfica’s been a blast. The Eagles will be wary of big money offers for their world champion.

Enzo Fernández. The first South American to be crowned FIFA’s Young Player of the Tournament. Notched up 118 touches, 77 successful passes and his 10 tackles became the most of any player in a WC final since Gennaro Gattuso in 2006. Numbers don’t lie and neither does his talent. pic.twitter.com/6zpNaRVU91

Dinamo Zagreb’s 27-year-old goalkeeper might not have been a famous personality but Croatia’s guardian, Dominik Livaković, has become a household name after the World Cup in Qatar.

Making the most saves in the tournament (24), with 11 of them coming during his colossal performance against Brazil, Livaković’s heroism was cemented after he made Croatia victorious in the penalty shootouts against Japan and Brazil. The Vatreni are now only the second team besides Germany to win four out of four penalty shootouts in the men’s FIFA World Cup.

There are already rumours surfacing that Bayern Munich were interested to sign the Dinamo Zagreb man to stand in for the injured Manuel Neuer. These have been dismissed but there’s nothing to suggest that more suitors aren’t in the line for the Croatian.

The travelling bag of Morocco’s midfield marshall, Sofyan Amrabat, had an extra pair of lungs in it. Covering each and every blade of grass possible, the defensive midfielder won 10 tackles, made 10 clearances, and recovered the ball an astonishing 57 times for the Atlas Lions.

Having values such as defensive resilience and perseverance mixed with commendable technical aptitude, Amrabat signified much of what that Morocco stood for in their dream run to the last four.

Just like on the pitch, the 26-year-old is everywhere in the transfer market, with reports suggesting that Liverpool are leading the race to land him but Tottenham Hotspur and Atletico Madrid also have the Florentina man on their radar.

Producer of a mouth-watering 30 goal contributions (13G, 17A) for PSV Eindhoven this season, Cody Gakpo was in the thick of the transfer gossip in the summer as well, attracting interest from a host of Premier League clubs.

A move didn’t materialise and coming into the World Cup, the pressing question was: ‘Can the boy play on a greater stage?’ He batted away the doubt away with his left foot, right foot, and head in the first three games, scoring thrice and turning heads.

The 23-year-old’s form might have faded away in the knockout stages but the goal-scoring and creating skills that he offers are always in demand, and the likes of Manchester United and Newscastle are all the keener to land the Dutchman.

Morocco were remarkable when under siege because, whenever an opportunity arose, the Atlas Lions would regain territory and release pressure. They could do so successfully because of press-resistant players like Azzedine Ounahi who would writhe out of a platoon of opponents in the middle of the park. The 22-year-old won a whopping 71% of his 14 take-ons, was dispossessed merely 7 times, and drew 12 fouls, second-most in his team.

As easy as it was for him to snake past players, out of possession, he made it doubly difficult for anyone to beat him – only twice could an opponent dribble past him. Moreover, Ounahi was Sofyan Amrabat’s marathon mate in the midfield, and the 22-year-old made 38 recoveries.

High-quality clubs love a player like Ounahi and one would presume that it won’t be long before the French side Angers would lose their hidden gem to a bigger shark.

Ajax and Ghana’s impressive, young central midfielder Mohammed Kudus loves to play as a forward, upfront or out wide, and score goals. It’s an uncommon mix but he has the capacity to excel in both, or sometimes conflate the two, as he did by scoring twice for his country against South Korea.

Kudus also won the penalty against Uruguay and it was him being subbed out against Portugal that changed the winds in favour of the latter in that fixture. The 22-year-old also netted 10 times in 21 games for Ajax, where he’s having a breakout season.

“I see Kudus playing in a big club like Real Madrid or Barcelona,” claimed his compatriot Iñaki Williams on Radio MARCA. His performances in this World Cup have helped those possibilities, even though Ghana bowed out in the group stages.

One effective way to get eyeballs on you is to come on the field and substantially help in flipping the final of the FIFA World Cup on its head. At halftime, Kylian Mbappé asked of his teammates to show some intensity, and Kolo Muani, alongside other young substitutes, did exactly that. The 24-year-old won the penalty that started the comeback and his 123st-minute strike on target would have made France world champions if it wasn’t for Emiliano Martínez’s outrageous save.

Players with the most assists in the European top five leagues 👏

After Kylian Mbappé and Olivier Giroud, it’s Kolo Muani who has the highest non-penalty expected goals rate (1.12), despite only being on the field for 181 minutes. The 24-year-old was roped in as a last-ditch replacement for the injured Christopher Nkunku because of his impressive displays for Eintracht Frankfurt in the Bundesliga, where he’s the leading assist-maker (9) to go with his 5 goals in 14 league appearances.

Finding a fruitful No. 9 is among the more difficult things to do for a professional football club. So when Cho Gue-sung scored twice in three minutes against Ghana, South Korea might have still lost the match but the Jeonbuk Hyundai Motors’ striker did himself a favour by turning the head of many potential suitors in Europe.

His impact in the World Cup coupled with his output in Korean club football – the 24-year-old was K-League’s top-scorer last season, MVP of the KVF Cup, and scorer of 21 and creator of 5 goals in 2022 – is the reason why he’s already very heavily linked with Celtic.