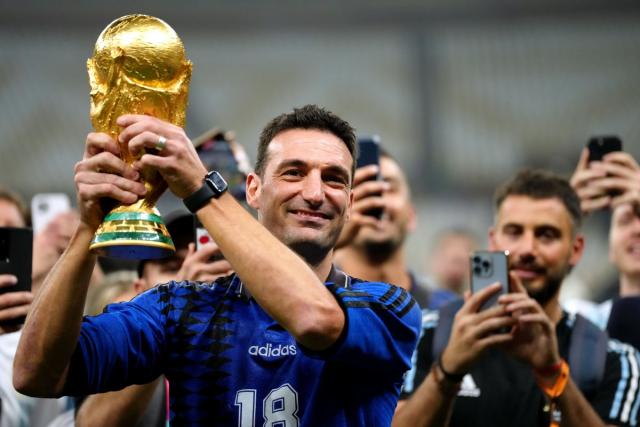 La Albiceleste and football, like a nationwide blanket of WIFI, through narrow streets and open parks, permeate every nook and corner of Argentinian life. The Sky Blue and White jersey brings boundless pride, joy, mania, passion, and even anger into the everyday existence of Argentinians, while on extraordinary days like Sunday when Messi and his muchachos made Argentina campeóns del mundo for the third time, you can only look at the visuals of the celebration in Buenos Aires to get a sense of the euphoria.

The streets are filled and it's crazy out there 🥳#Messi #Argentina #WorldCup pic.twitter.com/Z987MoD6po

But the national team is also, as it has always been, a matter of grave severity. There are endless debates about the appropriate playing styles, team selections, and whatever else is discernable, decidable, and arguable from the armchair.

The defining duality in Argentinan football has been Menottisme v Bilardisme, football philosophies named after previous World Cup-winning managers, César Luis Menotti and Carlos Bilardo. The former loved the romantic ideal of beautiful, innovative football, the latter is associated with antifútbol where the ends, and only ends, are what hold substance.

But the term that has snatched and consumed the imagination of Argentina, and has now hit the roof of football pop culture, is La Scaloneta, derived from the surname of Lionel Scaloni, Argentina’s golden son who broke the 36-year curse and started a countrywide tango party.

Unlike Menottisme or Bilardisme, the La Scaloneta bandwagon didn’t originate from the pages of broadsheets or magazines such as El Gráfico, rather keeping with our times, its source was a meme of Scaloni driving a camioneta – van – with his players sitting behind, which went viral after Argentina beat Ecuador in Copa América quarterfinal in 2021.

More than any overarching tactical ideology, it’s in the simplicity and innocence of Scaloni’s calming words: “The sun will come up tomorrow” where the magic of La Scaloneta lies.

At a time when the football-devout land of Argentina, where footballers are not players but deities, was saddled with the sorrow and suffering of losing five finals since 1993, including the World Cup final in 2014, La Albiceleste needed someone who could reinstate the beautifully powerful emotion that is hope, in their captain, in their players, in the nation.

Alongside fulfilling the dream of lifting a World Cup and a Copa América in his four years in charge, the manner in which the 44-year-old and his team has got the whole of Argentina (and the footballing world?) belting the Muchachos song, which says that Argentinians are happy and hopeful again, is a grand testament to their good work.

But when the ride started in 2018, after the hurt and disappointment of an underwhelming World Cup campaign under Jorge Sampaoli, Scaloni’s boss in the tournament as well as in Sevilla in 2017, nobody had faith in their new stand-in manager.

After all, Scaloni was a 40-year-old coach, without any experience in professional management, starting out his career with Argentina’s under-20 squad, when he received Argentine Football Association’s (AFA) call. But the federation was practically penniless, and, in the words of Nicolás Tagliafico: “Nobody wanted to take the national team.”

Among those unimpressed with the decision was also the divine Diego Maradona. “He’s a great lad but he can’t even direct traffic. How can you give the national team to Scaloni?” he grumbled, “Are we all mad? Eat an Asado, fine, but coach a national team?! It’s way too big for you.”

Handed a stagnant, ageing, and incongruent squad and initially named interim manager for two matches, over the course of two Copa Américas – the 2019 one where they lost to Brazil in the semi-final and the 2021 one where they defeated their nemesis in the final and quenched the 28-year-long trophy thirst – Scaloni instilled a newfound purpose, togetherness, and belief in La Albiceleste.

“If it’s 10 in the morning and Scaloni tells us good night, then it’s night for us, too,” Atletico Madrid midfielder Rodrigo de Paul summed up his manager’s impact on the team pretty well.

He was the first one to entirely solve the Lionel Messi question, and build a team where the captain laboured for the team as much as the team toiled for him. “I believe that he [Messi] identified with this team, that he could win or lose without lowering his shoulders,” assessed Scaloni.

Individual egos were quashed and close-knit collectivism, founded on a common goal, started to nurture within the squad. New/young players such as Emiliano Martínez, Christian Romero, Nahuel Molina, Nicolás González, Giovani Lo Celso and later, Julián Álvarez, Alexis Mac Alliser, and Enzo Fernández were introduced and established in the core of La Albiceleste.

In this process of healing and rejuvenation, what stood out was Scaloni’s own groundedness, honesty, simplicity, and openness to communicate. Many say it comes from the chacarero – farming – lifestyle he was brought up in.

By the time the 2022 World Cup was on the horizon, Scaloni had brought La Albiceleste a long, long away from the initial doubts and, unbeaten for 36 games, his team was brimming with belief to fulfil what was promised to the greatest ever, in their eyes. De Paul made his own written promise to his captain before the World Cup’s advent: “Today, November 20, I promise you that we will be champions.”

Pre-destined or not, it was a daring and delightful journey completed by La Scaloneta in reality.

While restoring Argentina’s identity and belief was Scaloni’s sternest obstacle and his great achievement, it does not in any way imply that he’s a tactical tomfool.

Inspired by the directness of the French side that eliminated Argentina in 2018, Scaloni wanted to take his La Albiceleste in that direction. “France and Croatia robbed the ball and were in a position to shoot in 3 or 4 seconds. That’s the way football is going, it’s the football I like and the moment has come to introduce this in Argentina. We’re going to be more direct and vertical,” announced the newly-appointed manager Scaloni.

Aware of the fact that “if you insist on dying with your idea, it will end badly,” Scaloni readily dropped his bombast notion of ‘Francifying’ after it failed awfully in his first match on the job against Colombia. He also understood that when you have Messi by your side, you needn’t mindlessly chase after speed and directness.

Gradually a well-organised possession-based system was devised where Messi was given the license to produce the spectacular but a midfield nexus was also budding around Lo Celso, De Paul, and Leandro Paredes, which superbly allowed Argentina to triumph in Brazil in 2021. In the Qatar World Cup, the midfield mantle was passed on to Mac Allister and Fernández.

Those closest to Scaloni would say that his eagerness to engage in debates and openness to ideas are among his greatest strengths. “There were theory, practical sessions, but the best part was the debates, arguments. And Scaloni was always right in the middle,” recalled Andoni Iraola, Rayo Vallecano’s coach and Scaloni’s classmate in a coaching course.

Surrounded by supporting staff of Pablo Aimar, Roberto Ayala and Walter Samuel, all former Argentinian internationals, the 44-year-old would have chatted tact at great lengths during the World Cup, and there’s a strong case to be made that his receptiveness and tactical flexibility made Argentina the world champions.

“Tactically he’s incredible: he learned how to structure his ideas, especially in Italy,” Leo Franco, Scaloni’s friend, a teammate at Mallorca, and coaching course classmate, explains his compatriot’s aptitude. “Some said: ‘He doesn’t have a style.’ They were laughing, dismissive. Too many don’t see that football evolves but he does. The two finalists weren’t coaches who say: ‘I have a system I’m not changing.’ You have to control every aspect. You need five at the back? Five. You need four? Four. Need the ball? Have it. If you have to kick it into the stands, kick it. Five forwards? Five forwards. He sees that.”

Alongside keeping his formations and system in flux, based on the opponents, such as matching the Netherlands’ 3-5-2 to neutralise their wingbacks or boosting his midfield by playing a 4-4-2 against Croatia to nullify their magical trio, Scaloni identified also the importance of youngsters like Mac Allister, Fernández, and Álvarez as the tournament progressed and was bold enough to give them the spotlight they warranted.

He might not be too keen on the phrase himself, but La Scaloneta has taken Argentinians on the road trip of their life, and the singing, the chanting, the recounting of the memories made and euphoria experienced will ride on for ages to come.