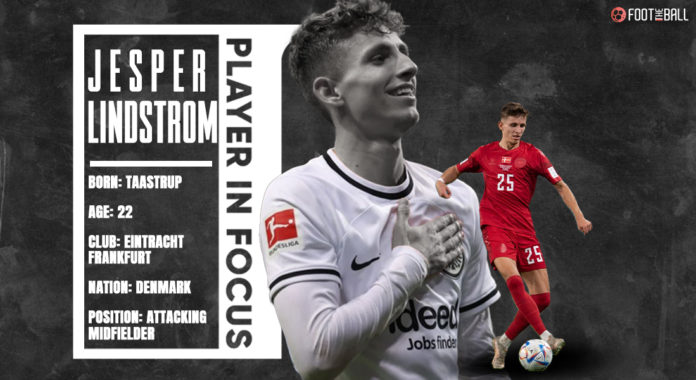 One of the most improved teams in the top five leagues across Europe in the last two seasons have been Eintracht Frankfurt. The Bundesliga team have been on the ascendancy in the league since the 2017-18 season. And in the previous two seasons, they have become a force winning the Europa League by defeating teams such as Barcelona on the way. And they have kept their form up this season by qualifying for the Champions League round of 16 and climbing up to second in the Bundesliga table. The team is blessed with a combination of youth and experience, with Jesper Lindstrom being one of the best players to come out this season.

The talented playmaker has been one of the best young stars across the continent and is already on the radar of big clubs. Eintracht Frankfurt, under coach Oliver Glasner, have signed several young players with potential who are now top performers. This include Randal Kolo Muani, Eric Ebimbe, Luca Pellegrini, Evan Ndicka, Tuta and Lindstrom.

Although capable of playing on either wing, Lindstrom prefers to play in the attacking midfielder role, just behind the striker, where he can use his creative capabilities.

So, who is Jesper Lindstrom, and how good is he?

How good is Jesper Lindstrom?

Born in Taastrup, a suburb in Copenhagen, the capital city of Denmark, Lindstrom displayed love and passion for the game at an early age. This was why he joined the local club Taastrup FC at the tender age of three. He spent three years at the club before joining BSI for a year and then leaving for Vallensbæk IF. At Vallensbæk, his name started to get famous among the youth circles. A fruitful five years at the club was rewarded when FC Brondby, one of Denmark’s biggest clubs, signed him in 2012.

Starting his journey in the under-13s, he progressed through various youth ranks. He first came into notice in 2017-18 when he scored five goals and provided one assist in his first season for the under-19s. Lindstrom scored 11 goals the following season and provided three assists in 17 games. He was the highest scorer for the team and helped them finish fourth in the league.

This got him a call-up to the first team, and he didn’t disappoint, scoring two goals and providing two assists. Both of his goals came in winning causes against Odenk and SonderjyskE, respectively.

However, despite all these performances, few would have expected the brutal form he would bring next season. Playing in his favourite attacking midfielder position, Lindstrom scored ten goals and provided 11 assists in 31 games. This won Brondby their first league title in 16 years.

These incredible performances meant clubs outside of Denmark hovering over him. And in the end, the race was won by Eintracht Frankfurt, who snapped him up for € 7 million.

And in his one-and-a-half season at the club, the playmaker scored 12 goals and created 8.

After joining Eintracht Frankfurt, Lindstrom was thrown straight into the first-team. Due to this, he initially struggled, failing to have even a single involvement till November. However, after hitting a purple patch, he scored four goals and two assists in six matches. He ended the season with five goals and five assists. His Expected Threats (xT) rating from carries was also an impressive 1.20, the tenth-best in the league. In addition, he was brilliant in his incisive passing with a 1.27 xT from passing, the ninth-best in the league.

Lindstrom has altered his game a bit in the current season, playing a more attacking role. This has already shown its effect, as he has racked up seven goals and three assists in just 15 games. He also scored his debut goal in the UEFA Champions League against Marseille in a tight 1-0 win.

This season he has also massively improved his dribbling capabilities ranking sixth in Bundesliga for xT from carries. Another proof of his brilliant threats in offensive areas is the Expected Offensive Value Added (xOVA) metric. The xOVA measures a player’s attacking output. And Lindstrom has been the third-best player on this metric after Serge Gnabry and Sadio Mane.

Jesper Lindstrom is one of the best young attacking midfielders right now. Lindstrom is a serious baller with his exquisite dribbling skills, line-breaking passes, and a keen eye for gaps in the opposition’s defence. However, one problem with him is that the number 10 position or the Trequartista is almost diminished from the football world.

Few teams deploy the role, and none of them are the big ones. So now the role of Trequartista has been acquired by the most advanced player in a three-person midfield. However, Lindstrom has the skill set to make that transition smoothly. He could also be utilised in a false nine role, given his impressive attacking instincts.

The only area where he could come up short is tracking back to help his team out defensively. However, Lindstrom has also become a serious threat in front of the goal, and if he can keep up his midfield output, he could become as good a player as another Bundesliga recruit Kevin de Bruyne.

Jesper Lindstrom has attracted attention from several clubs, of which Liverpool have been the most forthcoming. The Reds see him as a player who, instead of a midfielder, could be moulded into a false nine, a role Roberto Firmino played to perfection at the club.

However, Frankfurt would be tempted to keep him for at least one more season, considering they are challenging in the Bundesliga and the Champions League. However, with the way his career is going, he could be the next big signing for a top club. The only question is when he will make the big move. This season or 2024.