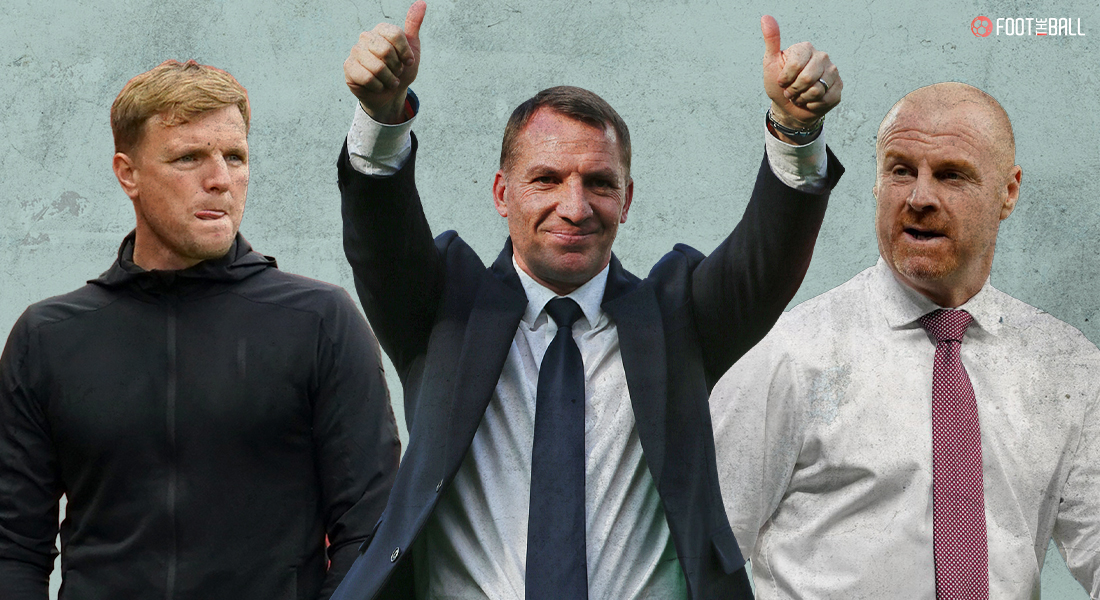 Aston Villa’s appointment of Steven Gerrard has taken the number of British managers in the Premier League to six- a recent record. Eddie Howe was just confirmed days earlier as the new manager of the world’s richest club.

We are delighted to confirm the appointment of Eddie Howe as the club’s new head coach.

The pair along with Brendan Rodgers (Leicester City), Sean Dyche (Burnley), David Moyes (West Ham), and Graham Potter (Brighton) are redefining the previously held notions of managers from Great Britain. Well, most of them are. Nevertheless, these are truly hopeful times for a young upcoming gaffer aiming to make it big.

Though each of them have different styles, the one binding thing has been that their teams have made the Premier League their home. Gerrard and Howe’s progress will no doubt be tracked closely and all of merit a closer look at.

Let’s clear one thing up- Dyche and Burnley are a cut apart from the rest. The league’s longest-tenured manager uses a classic 4-4-2 with big, burly centre-forwards up top. This is from an era of British managerial school which redefined the coaching manuals across the world. Dyche’s team knows how to go hard in matches, racking up tackles, fouls and the occasional cards.

Only the third time Chelsea have dropped points this season.#OptusSport #PremierLeague pic.twitter.com/AjAOa020v0

The Clarets have been battling relegation this season but it will not be a surprise if they manage to spring another surprise. Burnley and Dyche are one of the most ironclast pairings in the league and there looks to be no end in sight.

If one is searching for Dyche’s polar opposite, Potter and his spells have been working their magic with the Seagulls. Having started his career with Swedish minnows Ostersund in the third-tier, Potter guided the team through three consecutive promotions to the top-flight and the Swedish Cup during his seven years in charge. Brighton has his imprint all over, starting with the three-man defence, an oddity amongst English coaches.

– Got them through to the Europa League KO stage pic.twitter.com/5zIiP5nFl8

Furthermore, the system is set up to be as fluid as possible with players interchanging their roles frequently during matches. Neal Maupay is the central striker but Leandro Trossard has been thriving in that role too. In recent matches, Potter has thrown yet another surprise by ditching using a 4-1-4-1.

Our first Justice Table of the season.

Enock Mwepu plays in behind the striker with Adam Lallana being the anchor between midfield and attack. Brighton underperformed their xG massively but are overperforming immensely this season, with 12 goals scored already along with taking points off Liverpool, Leicester and Arsenal.

It’s been back-to-back seasons of agonising misses for Leicester and Brendan Rodgers. Having looked dead on for Champions League football, they have been knocked down into the Europa League both times. Nevertheless, the Foxes played a brilliant brand of attacking football, especially utilising the wide places.

All the #FridayFeeling we need! 💯 pic.twitter.com/9J2tsFc9So

Using a 4-2-3-1, Leicester are also blessed in having world class names like Youri Tielemans, James Maddison, and of course Jamie Vardy. The defence has been shaky this season, but once they transition into attack, it is all about speed and precision. There is no “hoofing the ball” upfield as was common once upon a time, which has been replaced by systemic working of the ball upfield and dropping back into blocks upon loss of the ball.

One of the biggest surprises of the season have been West Ham under the tutelage of Moyes, who has been taking the league and Europe by storm. A stunning win over Liverpool further cemented his reputation as one of the smartest operators in Britain. Once again, using the 4-2-3-1 but this rise in results has been aided by using the best players in their optimum positions along with longtime confidence in them.

Jarrod Bowen has become one of the standout players in the side while Said Benharama has stepped in nicely for the now departed Jesse Lingard. However, the real story has been the stellar performances of Declan Rice who has really earned his place as the best performing defensive midfielder of the league.

Declan Rice is the only midfielder to make 30+ tackles and 20+ interceptions in the Premier League this season:

Moyes wants his team to win the ball back quickly after losing along with breaking at quick speed. Breaking away from the norms of passivity at the back, Moyes has been using the extreme heights in his team to win set-pieces.

Howe has promised an attacking brand of football to be implemented at Newcastle, who are one of two teams yet to win a game. His Bournemouth team were one of the most exciting watches in the league, expertly playing through the wingbacks who regularly got forward. Furthermore, his attention to personal touches for all of his players helps in keeping the team united in the dressing room.

🗣"What a great education as your first job and those principles have lasted with me till this point now."

Eddie Howe explains how his time at Bournemouth will help him a lot in this new role at Newcastle pic.twitter.com/xyBxBgMrdF

Having worked wonders with the Cherries since their rise from League One, the Magpies will be hoping for a more fruitful turnaround in fortunes soon. Similarly, Gerrard had been integral in galvanising Rangers with the crowning moment being the undefeated season in 2020-21, with the Gers scoring 92 goals and conceding only 13.

Though his attacking style has garnered a lot of plaudits, it has been his robust defence and low blocks which has stumped opponents. It remains to be seen how well he gets on with Villa, but Gerrard is clear in his long-term ambitions of being a successful manager.