Last summer, when all the chaos that happened around the future of Lionel Messi leaving Barcelona, everyone was elated that the Argentine continued to stay in Catalonia after the election of Joan Laporta as the president. It was also expected that the 34-year-old will sign a new contract at the end of the 2020-21 season.

But to everyone’s shock, it was announced on the 5th of August that their captain will not continue with the Blaugrana after the complications that arose regarding his contract and the role played by La Liga in registering him for the upcoming season.

While the Coronovirus pandemic was one of the main reasons why Barcelona was facing all these problems for re-signing Messi, that was not the case with all the other big clubs across Europe. Chelsea and Manchester United were more than capable of presenting the Argentine contract proposals near his demands but the Red Devils went on to prefer signing younger players in more pressing positions while the Blues have imminently secured the transfer of Romelu Lukaku from Inter.

Manchester City and Paris Saint-Germain were the two obvious favourites, as they showed the most interest last summer when Messi wanted to leave, but with the Cityzens having bought in Jack Grealish for a fee of £100 million and wanting to sign Harry Kane for a similar amount, the Parisiens have become the sole favourites to sign Messi and bringing him to Ligue 1.

And in the recent hours, the move to France has become imminent with Jorge Messi, Lionel’s father and his agent, having agreed to the contract proposal presented by PSG and with the medical to occur later today or tomorrow morning. So here is FootTheBall to explain how Lionel Messi joining PSG can affect the entirety of Ligue 1.

PSG and its president Nasser Al-Khelaifi would love to have a player of the calibre of Lionel Messi at his club when the country that indirectly owns the club hosts the World Cup next year. Having a star like Messi would not only boost the image of Qatar on the global stage, but it would also strengthen an already incredible team containing the likes of Achraf Hakimi, Sergio Ramos, Neymar among others to an extent that they would become the single most dominant force in European football for the next few seasons. 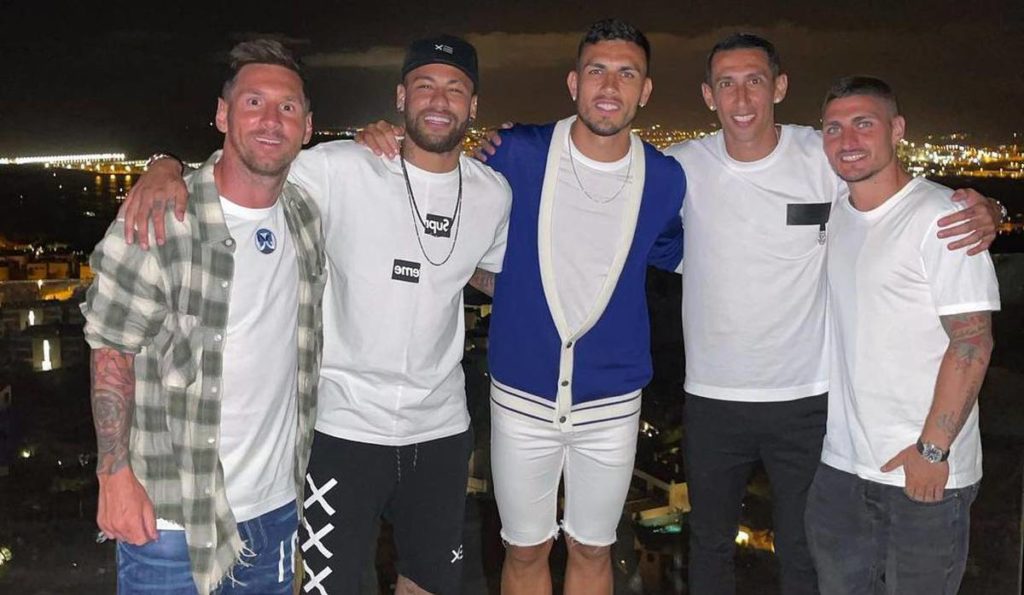 Lionel Messi with some of the PSG players. (Image Courtesy: Marca / Website)

And if PSG goes on to dominate Europe with the likes of Messi, Ramos and Neymar at their helm, it only does good to Ligue 1 rather than the negative effect that has been there in the recent years. Messi’s imminent arrival in Paris arguably rescues the financially struggling Ligue 1, as it is certain that the league would receive a huge boost thanks to some lucrative TV rights.

It would help them cover the costs that have occurred due to the coronavirus pandemic, stabilize themselves soon and become competitive, which is essential in the wake of their previous TV deal collapse, which saw the loss of a contract worth nearly €1.15 billion per year (€814m a year from Mediapro and €330m from BeIN Sports).

And the Argentine’s move to PSG can become a domino effect on the other clubs too. Clubs might start to attract some top up-and-coming talents to come to Ligue 1 which in turn improves the quality on the field too. Majority of the French clubs more often than not tend to lose most of their talented youngsters to overseas clubs across Europe as they are cash-strapped due to the non-availability of money from the league while some of the owners are not like what PSG have and go bankrupt due to mismanagement.

This Ligue 1-Uber Eats sponsorship deal is the gift that keeps on giving. Reportedly, part of the deal coming in next year is that the match ball will be “delivered” to the pitch – https://t.co/FKNGtbsqey – Via @lequipe.

Apart from the broadcasting revenue, Messi’s arrival might help the other clubs and also the entire league to bring in new sponsors, mainly from across the world. At present, only the food and construction industries are the most represented in the league in terms of the shirt deals in Ligue while it is a rarity that clubs have multiple sponsorships at once, unlike the clubs in the other top 5 leagues.

The overwhelming majority of brands are located in France, highlighting the domestic appeal of Ligue 1 to French brands but it also shows the league’s lack of international shirt sponsors in contrast to La Liga and the Premier League, whose international appeal are able to attract 14 and 16 international brands respectively.

Even though Messi might be 34 and only has another 2-3 years left in his tank as a footballer at the highest level, but he is still a larger-than-life personality that has created truckloads of magical moments while on the pitch and fans of PSG and also the other Ligue 1 clubs that the Argentine continues to create such moments and truly disseminate his aura and charisma to the entire league.