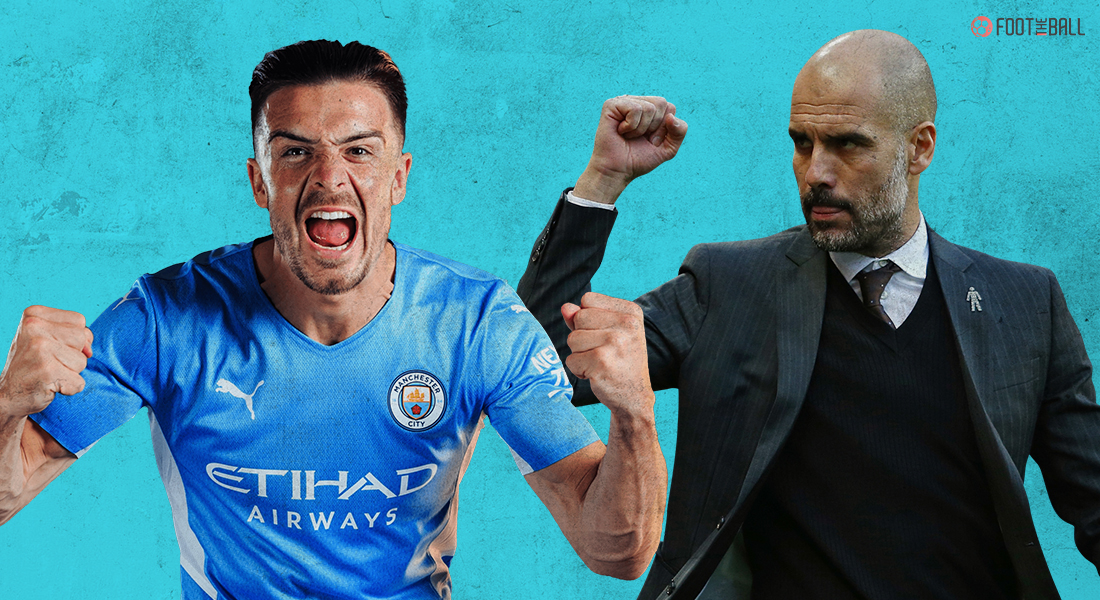 The FA Community Shield 2021, which has produced some memorable matches over its storied history, was a dull affair for most parts. Leicester City won 1-0 after earning and scoring the decisive penalty following some sloppy play from Nathan Ake. However, the main attraction for the Cityzens and their supporters was of course the debut of Jack Grealish.

The 25-year-old came on in the 65th minute but was unable to influence proceedings much. There will certainly be more expected from him over the course of the upcoming season.

PLAYING FROM THE LEFT

Grealish was brought on in place of impressive teenager Samuel Edozie. The England international’s primary role was to attack Ricardo Pereira and get into the box for taking a shot. However, that plan did not work as he registered zero strikes on goal. His passing accuracy was 94% including the creation of one chance.

The most disappointing thing about his cameo was how much he struggled in getting by the Foxes’ defence. Wilfred Ndidi and Pereira between them were able to keep Grealish quiet. This was underlined by the fact that he only completed one of his four dribbles. Though there is some fatigue to be expected after a brilliant Euros, it never looked like he would be able to produce that magic he is known for.

He won only one duel and lost six, but his physicality needs to be bulked up a bit. Furthermore, a facet of his play that angers the opposition is sometimes he goes down too easily. No doubt he wins a lot of fouls, he was the most fouled player over the last two seasons, but yesterday he had no luck. Grealish had a run at Ndidi with both players going shoulder-to-shoulder and while he took a tumble, there was no whistle.

He will take some time to gel with his new teammates in terms of the wavelength and gameplay as well as having a proper forward to deliver crosses to. Yesterday’s performance was not up to the standards he or Pep Guardiola would expect.

WHAT CAN BE BETTER?

For starters, the absence of a central striker will not help Grealish’s chance-creation. Guardiola needs to decide how he will set his team up in order to get the best out of his 100m man. Should he continue with his affinity on the left-wing? Phil Foden performed brilliantly playing from the centre as a ‘false nine’ or from the left with De Bruyne through the centre.

Grealish reacted to his City debut and the reception he got from the Blues fans at Wembley #mcfc https://t.co/13HOtCIMfl

In that regard, Grealish can become an attacking midfielder in the midfield three. From there he will have a good amount of attacking threat in terms of charging the defenders. Of course, there will be teams who have a poorer defence than the Foxes over the season. This was how Grealish was deployed against the Czech Republic at Euro 2020.

👏 "He fits in perfectly to what #MCFC play."

⚽ "Moving it around, and weight of pass, Jack Grealish is up there with the very best."@TonyCascarino62 has no concerns about Jack Grealish's role at Manchester City. pic.twitter.com/2rItIhcHkt

Sitting behind Kane, he was able to move either to the left or to the right, depending on where the ball was. That led to his assist for the goal which was a cross over the defence. Against Germany, he was brought on in his usual left-wing position which helped in the overlapping runs of Luke Shaw. That can be another caveat for Manchester City.

Jack Grealish: "I think everyone knows how much I admire @DeBruyneKev and it's going to be a dream come true to play alongside him…" 🤝💙 [via @ManCity] pic.twitter.com/Hjhr4Hua3Y

Depending on who starts at left-back will be crucial. Whether it will be Joao Cancelo, Oleksandr Zinchenko, or Benjamin Mendy will play a massive role in how much influence Grealish will have. All three are attack-minded, but Cancelo needs to cut in on his right foot often. Guardiola mentioned how “aggressive” he was which was marginally true but him “gliding” by opponents will not be easy anymore.

Things will slowly pick up for Grealish and his manager stated “tempo” as a key indicator of what is to come. There were some delightful passes and lay-offs which will certainly be converted once the team returns to full strength. It will be a scary prospect facing this City side who have a vast richness of talents waiting to complement the natural qualities of Grealish.

A disappointing result today but an absolute honour to make my debut for this club and thank you to the fans for the lovely reception! Can’t wait for next weekend! 🙌🏻⚽️ pic.twitter.com/JVe4SBaAWU

Though his debut was unremarkable by the standards fans had come to expect from him every time he takes the pitch, there is definitely more to come sooner rather than later. Like Guardiola stated, “He didn’t come to play 25 minutes, he came to play five, six years.”