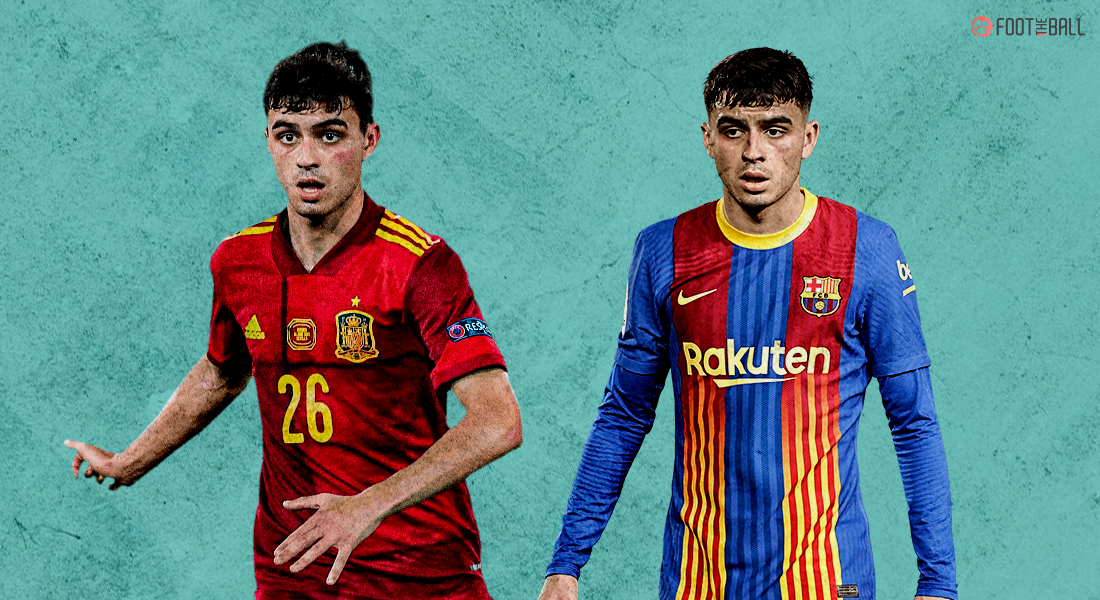 Spain have been blessed with some of the best midfield technicians in the game’s history. Names like Andres Iniesta, Xavi, Xabi Alonso, Cesc Fabregas, and others have been lighting up La Roja for years. The latest addition to this long line of players seems to be one 18-year-old teenager, currently playing at Euro 2020.

Indeed, Pedro González López who goes by the name of Pedri, has been a star turn, not just for dominating way more experienced players but also the number of games he has already played. Pedri has already appeared in 60+ games for Barcelona and Spain combined, while he is also scheduled to go to Tokyo for the Olympic Games. That is a remarkable number of games for an experienced veteran let alone someone who is still in his teens.

The most impressive thing about Pedri has been the fact that he is not a player who scores too often. Neither does he give the final assist to a scorer.

However, his importance to his team cannot be questioned. This is due to the fact that Pedri is a very clever player with the ball at his feet. The ease with which he carries the ball forward, glides past opposition players and distributes it so efficiently are integral facets of his game.

Pedri has been one of the most heavily depended upon players by manager Luis Enrique, underlined by his continuous presence in the team. Just 18-years-old but his confidence has been the key.

Supporters and commentators have been in awe of how assured he has looked during these international matches. Mind you, these are not your average teams in La Liga either, these are the biggest nations in Europe.

Pedri has taken to these games like a fish to water and there are only great things in the young man’s future. Spain have been floundering for most of their games at Euro 2020, but Pedri has earned rave reviews all this time. The way with which he shields the ball, instigates attacks and is always looking for the next pass are reminiscent of the bygone era.

There are great hopes surrounding Pedri and how these performances are just the start of an incredible year. He has just had his first full season with the Blaugrana where his stats are mind boggling for a teenager.

Having played 37 games, Pedri posted a passing accuracy of 88%, a dribbled success rate of 71% to go with 42 chances created and 39 key passes. For La Roja, that passing accuracy has increased to 90% along with nine chances made.

He has also played the full ninety in all five of Spain’s matches so far, along with 28 minutes in the extra-time win over Croatia. Along with Unai Simon, he has been the other mainstay of the team and notwithstanding the pair’s embarrassing own goal, have been solid in their areas.

Pedri is set to appear in his 66th game against Italy in the semi-final of Euro 2020. That is a remarkable amount of football for a player at this age. Given the nature of the condensed league season and the Euros immediately after, there has hardly been time for adequate rest.

Thankfully, Pedri has avoided injuries till now but the longer he continues playing at this period of time, the longer those chances of remaining injury free diminish.

When Spain announced their squad for the Olympics, it was no surprise to see that Pedri had been chosen. He has grown to be a vital cog who is sure to influence games in Tokyo as well. Spain do not have the best record (they missed out on qualification in 2016) but have named a strong side this time.

Having gained some valuable experience amongst the top players at the Euros, the U-23 team will look to use that to scale new heights.

However, the fear remains that Pedri can suffer from burnout and increased fatigue before the new season gets underway. With the club in turmoil regarding players and salaries, Pedri’s performances have been a beacon of hope on which they can further build. It is vital that Pedri remains fit to achieve even bigger goals over the upcoming year.

Pedri has earned plaudits for his calm, composed demeanour all throughout the Euros but his performances have been only getting better. He has already established himself as one of the first names on the team sheet which is only set to blossom.

Spain have long been in search of players to adequately replace the creative geniuses of Iniesta or Xavi. Though his career is a long, long way from those heights right now, they might just have found the perfect candidate in another Barcelona man.