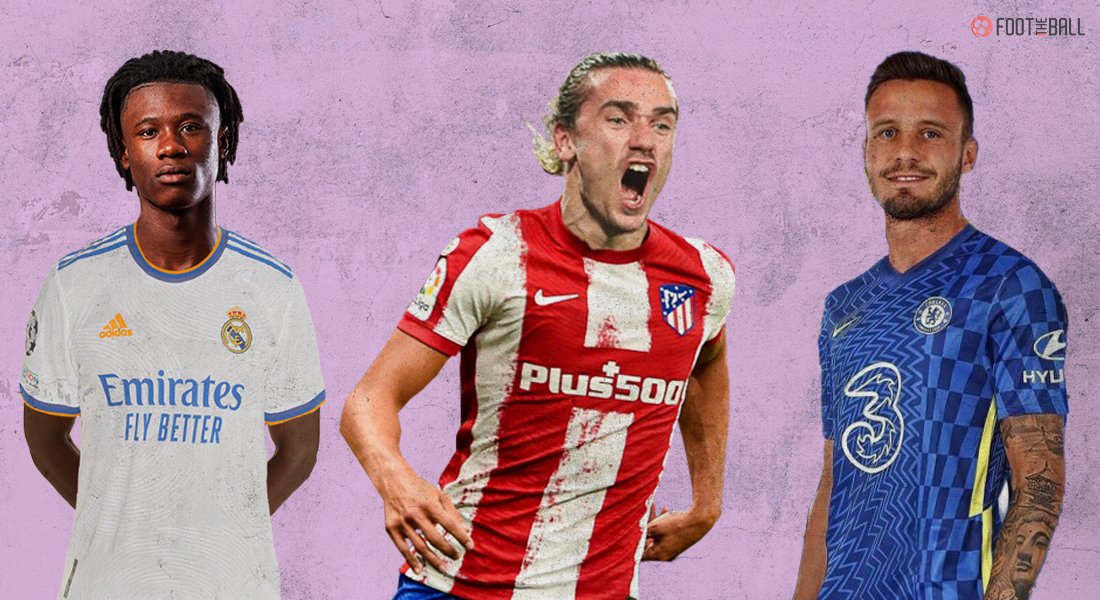 One of the best transfer windows in the history of football, the 2021 summer window ended with a bang. Messi leaving Barcelona, Ronaldo re-joining Manchester United, PSG accumulating a mouth-watering squad, and whatnot. And just like the whole summer window, there were several magnificent transfers on the deadline day of the window.

Atletico Griezmann returned to former outfit Los Rojiblancos while Real Madrid pircahsed Rennes midfielder Eduardo Camavinga. The transfer window ended in sublime fashion as teams splashed the cash to buy their favourite stars. With football entering into the international break, teams might have some breathing space after the jaw-dropping window came to a close. We at FootTheBall take a look at the best transfers on the deadline day of this glorious summer window.

The transfer window has witnessed some outstanding re-unions this summer. From Ronaldo’s return to Manchester United to Lukaku joining hands with Chelsea, players have returned to their former outfits. And one such addition to the list was French forward Antoine Griezmann. Los Rojiblancos deadly goalscorer arrived at Barcelona for a whopping price of 120 million euros in 2019.

Griezmann has agreement for two years contract plus one option. He’s BACK at Atléti. Shocking move of the day. pic.twitter.com/kBQAkgQyLt

But after the French player’s transfer didn’t reap the expected results, Griezmann was linked to a move back to his former club since the transfer window began. While Memphis Depay’s electrifying form since his arrival at Barcelona dampened Griezmann’s chances of making it to the starting eleven. And Diego Simeone captured Griezmann’s signature on the final day as Barcelona finally let their star player leave the club.

One of the biggest transfers on deadline day, Antoine Griezmann has signed with Atletico Madrid on a loan deal for 40 million euros. He’ll be representing the reds and white until June 2022, while the Spanish champions also have an option to buy the French goal-scoring machine.

Chelsea’s defensive midfield trio of Kovacic, Jorginho, and Kante had a latest addition as the European Champions signed Spanish midfielder Saul Niguez from Atletico Madrid on a loan deal for 5 million euros. A graduate of Atletico Marid’s academy, the midfielder had spent a tenure at rivals Real Madrid during his early days. Since then Saul remained an integral piece of Simeone’s eleven.

Saúl will officially join Chelsea in the next few minutes on loan for €5m with also buy OPTION for €40m valid in June 2022. Atletico Madrid have total agreement with Chelsea as revealed earlier – it’s here we go. 🔵🇪🇸 #CFC #DeadlineDay

Unfortunately for Saul, his place in Atletico’s midfield was taken by young guns present in the squad. After constantly being benched by Simeone, Saul was rumoured to leave for FC Barcelona. Unfortunately, the deal fell off and Chelsea got their man on the final day of the summer window. One of the biggest transfers on deadline day, Saul could improve Chelsea’s star-studded midfield.

After Florentino Perez’s whopping bid of 200 million euros for Kylian Mbappe was rejected by PSG’s administration, Los Blancos purchased another French player. Eduardo Camavinga had been on the radar for several European sharks with the Red Devils looking as Camavinga’s preferred location. But Real Madrid captured Camavinga’s signature on the last day of the transfer window. Surely, one of the biggest transfers on deadline day

Camavinga is an electrifying midfielder who could fabricate opportunities out of nowhere. The French player isn’t scared to gallop towards a defender easily dribbling past him. He’s technically gifted, is blessed with quick feet, and understands the game a bit more than his teammates. The 31 million euros signature wouldn’t trouble Los Blancos considering the quality of Camavinga.

After the news of Griezmann’s fairytale return to Atletico Madrid broke out, another piece of news surrounded the Camp Nou. Reportedly the Catalans had approached Dutch forward Luke De Jong to join the club. The Dutch forward has scored 27 goals two seasons ago for PSV Eindhoven after which he was offered a contract by Sevilla.

Although in the two seasons with Los Nervionenses De Jong just scored 10 goals, he could be considered a great purchase for the Blaugrana. Luke De Jong and Memphis Depay have played together for PSV Eindhoven and La Oranje creating a brand-new forward battery for Ronald Koeman. While the Dutch element currently present in Barcelona would enable him to settle easily at the club.

The last addition to PSG’s shopping cart of 2021, Nuno Mendes marched into the Parisians squad of 2021. After already enjoying a jaw-dropping summer window capturing the signature of Gigi Donnarumma, Sergio Ramos, Achraf Hakimi, and Lionel Messi, Mauricio Pochettino also signed the young full-back for a price of 40 million euros.

The Parisians have struggled defensively and although the new summer signings might improve PSG’s backline Nuno Mendes could play as the secondary to Hakimi. The Portuguese arrived from Sporting and was being chased by some of Europe’s elites with Manchester City being the front-runners. Unfortunately, they couldn’t meet Sporting’s demands as Nuno Mendes fell into PSG’s basket.

Brazilian right-back Emerson Royal signed a contract with Tottenham Hotspurs after he was sold by former club Barcelona for 25 million euros. Joan Laporta had signed Emerson in the same transfer window after he returned from Real Betis where he was sent on loan. The Copa America runner-up played three games for the Catalans this season before being shipped off to the Premier League.

Portuguese coach Nuno Santo would find Royal’s transfer a blessing considering the fact the Spurs need a change in their defensive structure. Youngster Japhet Tanganga has started all the games at the right-back position and although he has looked like a strong prospect, Royal adds a hint of experience in Spurs’ backline. And the Brazilian was by far the best defender in La Liga last season making it into FootTheBall’s La Liga Team of The Season.

Juventus might have had a shocking transfer window losing veteran forward Cristiano Ronaldo to Manchester United. And with Allegri looking for a replacement, the Zebre have signed a familiar face in Italian forward Moise Kean. Signed on a two-year loan deal by Juventus, Kean could be the perfect substitute to the departing Ronaldo.

During his tenure at PSG and Everton, Kean chipped in with crucial goals and assists helping his squad script a victory. At Juventus, he could be playing as the centre-forward with Chiesa and Dybala operating on either flank. Along with that Kean has already played with the current Juventus squad and won’t need time to settle in Turin.

When Dan James, an electrifying right-winger scored a goal for the Red Devils at Old Trafford on his Manchester United, the world waited for more. Unfortunately, the Welsh player couldn’t suit United’s system as the club made huge signings throwing James to the bench. But Leeds United might have rescued James’ falling career by signing him for 25 million pounds.

Excited to finally join @LUFC! I'm looking forward to playing at Elland Road in front of the fans and to start this next chapter in my career! See you all after the International break!👊🏼⚪ pic.twitter.com/OpRt5z4rTI

At Elland Road, Dan James could show his potential to the world considering the stature of the club. He won’t be expected to score massive amounts of goals and won’t be subjected to immense pressure. While Marco Bielsa loves having pacy wingers and opening up teams with their darting runs. James could be preparing for a staggering season at Leeds United considering the quality he still possesses.

Japanese defender Takehiro Tomiyasu joined Arsenal from the Italian side of Bologna on the last day of the transfer window. One of the best transfers on deadline day, the centre-back could bolster Mikel Arteta’s shambolic backline. Even after signing Ben White this season from the Seagulls for almost 50 million pounds, the Gunners have struggled defensively.

Medical during the afternoon and then official announcement. Here-we-go.

They were demolished 2-0 by Romelu Lukaku and Chelsea and then champions Manchester City stunned them with a 50- victory. A strong defender, the Japanese player rarely gives the rival breathing space. Also considering the fact that the defender cost Arsenal just 19.8 million pounds, he could turn into a revelation at the club. One of the smartest transfers on deadline day, Mikel Arteta’s defensive line might get a new life after Tomiyasu’arrival.

David Moyes, West Ham United’s manager finally received the required funds to bolster his squad. The Hammers have a terrific squad but needed improvement in a few positions if they wanted to compete in the Europa League. Currently sitting on second, Moyes’ squad have won two and drawn one in the three games they have played. And they added another player to their catalogue of transfers signing Nikola Vlasic on deadline day.

Since Jesse Lingard’s departure to Manchester United, Moyes needed an attacking midfielder in his roster. And the purchase of Vlasic could suit Moyes’ requirements. Vlasic’s deadline day signing sits at the top of all of West Ham United’s transfers this summer considering the quality he brings to North London. The purchase cost the Irons approximately 30 million euros.