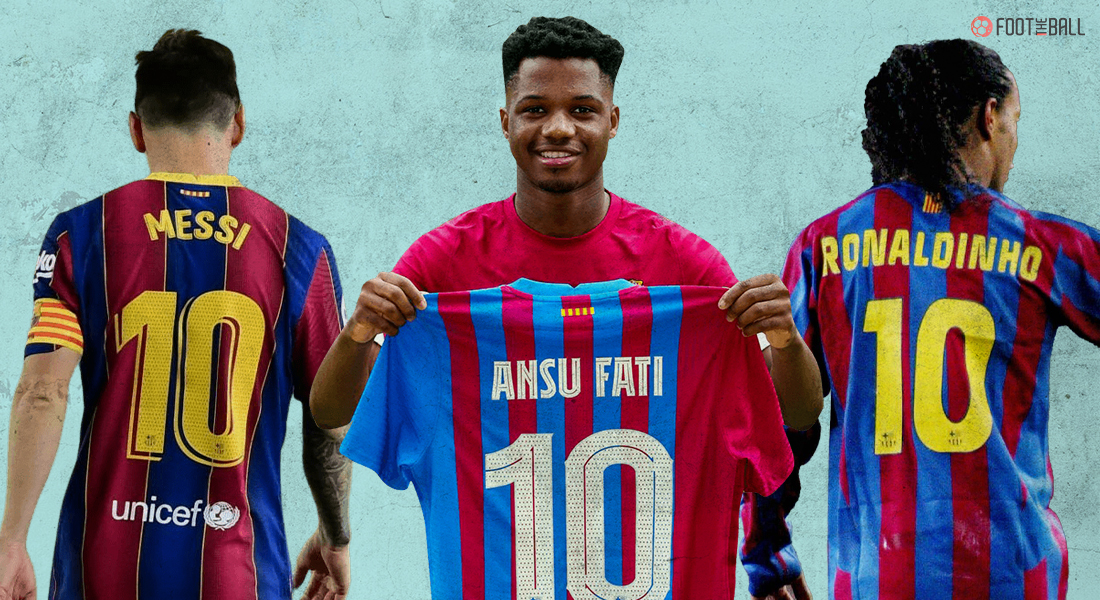 After the dust settled on a jaw-dropping transfer window another staggering piece of news arrived from the Camp Nou. After Lionel Messi’s shocking departure to PSG, the world wondered who would be given the number.10 shirt at Barcelona. With some exceptional talent present in the squad, Ansu Fati bagged the prestigious jersey at the club.

The Spanish forward began his career in sublime fashion scoring goals week in and week out. Although an injury-shortened his last season, Fati is prepared to don the Blaugrana jersey once again. The number.10 shirts previously belonged to Lionel Messi and before that, it was owned by Ronaldinho, so undoubtedly Fati has big shoes to fill this season. Although replicating the legacy of Ronaldinho and Messi is an impossible job if he even comes an inch closer to their heritage, he could be considered a world-class player.

Spain’s top-flight introduced jersey numbers in 1947 with the prestigious Madrid derby serving as the first game with jersey numbers. In the early eras for the Catalans, Laszlo Kubala donned the number.10 jersey at the club. The Hungarian forward made approximately 357 appearances for the Spanish club scoring a massive 281 goals for the Catalans.

He conquered the Spanish championship four times with Barcelona and was considered one of the greatest players to have played for the club. After the forward hung his boots, he was appointed as the coach of Barcelona and the Spanish national team. He, unfortunately, passed away in 2002 aged 74 but left a legacy for the next generation to follow. A name the current generation could confuse with Uruguayan striker Luis Suarez, the Spanish Luis Suarez was a class apart during his playing days. In 1960 the Spaniard won the Ballon D’Or beating Los Blancos’ Ferenc Puskas. A part of Barcelona’s famous team of the 1950s and 1960s, Suarez formed a commendable partnership with Kubala and Evaristo.

While the Uruguayan Luis Suarez couldn’t don the number.10 shirt, the Spanish playmaker earned the famous number because of his world-class performances. He won the Spanish League twice with the Catalans while also winning the Copa Del Rey on both occasions.

55 years ago today Evaristo scored to knock Real Madrid out of the European Cup pic.twitter.com/9QwnMBizwM

Although Brazilian player Evaristo played for both Barcelona and Real Madrid, he was still considered a legendary player at Barcelona. Unlike Luis Figo, Evaristo earned the praises of Barcelona’s spectators even after switching to Los Blancos. A legend at the club, the Brazilian was one of the best players to wear the number.10 shirt for Barcelona. Managed by legendary coach Helenio Herrera, he was a part of the formidable Catalan outfit that was an inevitable force in Spain. Barcelona’s website mentions that the Brazilian striker scored an unimaginable 181 goals in the 237 games he played for the Spanish outfit.

Before Maradona arrived at Camp Nou, the number.10 shirt had passed different players at Barcelona but none of the players could match the success that came with the number. But then arrived one of the greatest players to have graced the game, Argentine veteran Diego Maradona.

Thank you for everything, Diego pic.twitter.com/bJ9l3ixY7A

Maradona was an iconic player who had a long-standing legacy at Camp Nou. Incharge of the number.10 shirt at Barcelona, he could be the second-best player to have ever worn the jersey number. Unfortunately, Maradona’s Spanish endeavour didn’t last long as he transferred to Italy after a couple of seasons. But during his tenure at the club, the Argentine legend scored 38 goals in 58 games and won several accolades with the Spanish giants. Steve Archibald got the number.10 shirt of Barcelona after Maradona, with Robert Fernandez and Pep Guardiola being next in line.

Bulgarian forward Hristo Stoichkov won the shirt after Guardiola. Although you could usually spot Stoichkov wearing the number.8 shirt for the Catalans, he was presented with the prestigious number during the 1993-94 season. The striker scored almost 162 goals in 341 games for the club and won Catalan’s first European Cup in 1992 along with other titles.

But Stoichkov’s colleague Romaria was a constant feature wearing the number.10 shirt at Barcelona. The Brazilian forward rattled defences with his amazing goal-scoring capabilities and was considered a crucial piece of Cruyff’s Dream Team at Camp Nou. Unfortunately, an argument with the legendary Dutch player saw Romaria being shipped off to Brazil where he started playing with his boyhood club Flamengo.

After Romario’s departure, the shirt looked for a long-lasting talent. Different players came through but none could adopt the glorious number. From Roger Garcia to Jari Litmanen, none of the players could register exceptional performances wearing the jersey for the Blaugranas.

RIVALDO TO RONALDINHO TO MESSI

Brazilian sensation Rivaldo was then given in charge of the number.10 shirt of Barcelona after a few of its predecessors had failed to keep the number’s legacy running. The Brazilian shifted from number.11 to number.10 during the 2000-01 season. And since that day he became a class apart ripping up La Liga with his goal-scoring heroics. Winning the Spanish League Title twice and the Copa Del Rey once, Rivaldo had a glittering campaign with the Blaugranas. The Brazilian also won the Ballon D’Or in 1999 and was also voted the FIFA World Player Of The Year in 1999.

🇧🇷 Rivaldo with an all-time great against Valencia. 🚲 pic.twitter.com/ixkm4Nls7L

Rivaldo passed on the number.10 shirt to Juan Roman Riquelme. But the Argentine couldn’t hold onto it as another Brazilian player stripped it off him. Well! A player who needs no introduction, Brazilian sensation Ronaldinho was the next in line for the glorious jersey number.

Purchased from French outfit Paris Saint-Germain, Ronaldinho arrived at the club to write a glittering chapter in Barcelona’s history. He completely changed the way Barcelona played while establishing himself as one the greatest players to have touched the ball. The Brazilian smashed 98 goals for the club but what the man brought to the pitch was above all statistics.

Fortunately for the Barcelona spectators, Ronaldinho paved the way for a young Argentine before leaving the club and the number.10 shirt. Lionel Messi, a name synonymous with FC Barcelona will be remembered as one of the greatest players not only in Spain but in the world. The Argentine first donned the number.30 shirt because of Ronaldinho’s presence but since the Brazilian’s departure, he was awarded the number.10 shirt by Barcelona.

And well by the time Lionel Messi departed from Barcelona, the world had witnessed something special. Every week you could turn on your TV sets and could witness a little Argentine magician performing his magic for Barcelona. Messi scored a total of 709 goals for the club in 778 appearances and won major accolades with the club.

WILL FATI EMULATE THESE LEGENDS?

When you have to replicate a legacy set by players like Lionel Messi or Ronaldinho you might be the unluckiest player on the planet. But lucky for Fati he can reach the benchmark set up by his predecessors of the number.10 shirt.

The goalscorer had shown glimpses of promise whenever he donned Barcelona’s jersey, and when Lionel Messi gave the Spaniard a heartwarming hug, the world had flashes of a young Messi being comforted by the veteran Ronaldinho.

Barcelona's new No. 10 has big shoes to fill ✨ pic.twitter.com/vfcNREv0PK

With Barcelona currently struggling as a club, Fati could help the Catalans resurrect themselves with his magnificent goal-scoring abilities. Fati is still young and has a lot of time to prove himself as the perfect heir of Barcelona’s number.10 shirt.