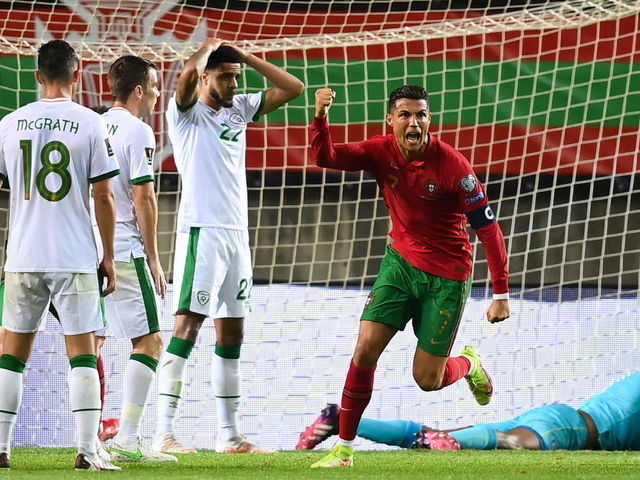 Cristiano Ronaldo just became the highest scorer in Internationals. He has overtaken Ali Daei and his 109 goals.His goals against Ireland were his 110th and 111th, the man just refuses to stop. He is just an utter goal scoring machine! Ronaldo breaks Ali Daei’s record!

Stephen Kenny, the manager of Ireland, was adamant that his team would stop Ronaldo from breaking the record in this match. But CR7’s brute force and will power made sure he had to wait no longer. He was expected to break the record during the Euros but could not, however everyone knew it was coming. Ronaldo scoring goals is inevitable now.

He scored an emphatic brace in the dying embers of the game. The first came at 86th minute and the second in the 96th minute to make sure Portugal came back from 1-0 down to win the game 2-1. Cristiano Ronaldo who has been Portugal’s leader on the pitch for more than a decade now,saved Portugal yet again. In the process of breaking the record he made sure Portugal won the World Cup qualifier.

Ronaldo has been setting standards for years with his consistent level of performance everywhere he goes, now he will set a new standard at the international level every time he scores for Portugal.

Active players chasing Ronaldo’s  tally of international goals includes the likes of Messi, Lewandowski, Chettri and Lukaku who are considerably behind the mercurial attacker.

Ronaldo was destined to break the record as he still is at the top of his game and would love to guide Portugal to their maiden World Cup at Qatar 2022.

Cristiano Ronaldo who has also returned to his beloved Manchester United would be hoping that young players at Old Trafford can use him as the perfect example to model themselves after. Now that Ronaldo has broken Ali Daei’s record surely looks like a promisiing sign for the Red Devil’s as he will return to the Theater of Dreams on a high.