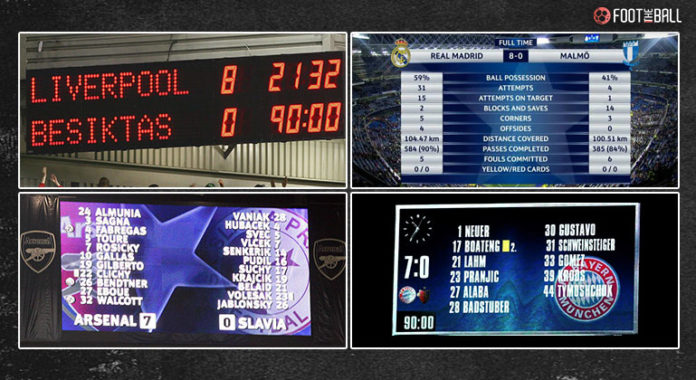 The UEFA Champions League has put on quite a show in its long and rich history. Elite clubs from all over Europe compete for the most prestigious silverware. With the bigger clubs thrashing the so-called smaller clubs left and right, with the odd exception of a giant-killing, FootTheBall takes a low down on the biggest wins in Champions League history.

Liverpool became 1st team in the history of the Champions League to score 8 goals in UCL. That year Liverpool was on the song they had a magnificent team. The Reds scored 8 past Turkish side Besiktas that year.

Yossi Benayoun scored three of Liverpool’s eight goals in this victory, becoming the first and, so far, the only Israeli player to achieve a triple in Europe’s premier club tournament. Two Peter Crouch strikes bookended another six goals for the Reds.

Another interesting fact about this match is that 6 out of 8 goals of  Liverpool came in the second half. Thus Liverpool became the first team in UCL to score 6 goals after halftime.

Swedish side Malmo were fully expected to leave the Bernabeu with nothing when they faced Real Madrid in the final Group A game of the 2015/16 season, but to lose 8-0 was far from expected.

Despite Karim Benzema scoring a hat-trick within 74 minutes, the game was dominated by Cristiano Ronaldo who scored four goals in 19 minutes, with Mateo Kovacic also getting on the scoresheet to seal the joint biggest win in Champions League history.

The 13-time champions of Europe have had a history like no other in the competition, but this remains their biggest win.

Olympiacos’ trip to Turin to face Juventus back during the 2003/04 season couldn’t have gone much worse. Two early goals from David Trezeguet and Fabrizo Miccoli put the game out of Olympiacos’ sight, with a goal from Enzo Maresca and a second from Trezeguet handing Juventus a 4-0 lead at half-time.

The Old Lady didn’t take their foot off the gas for the second half and scored two more thanks to Alessandro Del Piero and Marcelo Zalayeta. Juventus haven’t won the title since 1996 and this remains their biggest win in the famous competition.

Successive finishes of fourth in 2006 and 2007, during a transitional period that saw Arsenal lose key members of the invincible 2003/04 side, were fully illustrative of the hangover from the Gunners’ golden era.

If nothing else, this massive win was a reminder of what the club can do on its day. Cesc Fabregas opened the scoring after five minutes, and by the full-time whistle, he and Theo Walcott had scored a brace apiece.

Alexander Hleb also had a night to remember, providing a goal and the assist for Walcott’s second, contributing to Arsenal’s biggest European home win at the time.

The result also gave them the confidence to avoid defeat in all but one Premier League game over the following three months, and stay in touch with the title race until a brace of spring defeats against the eventual top two.

Marseille’s trip to Slovakia to face Zilina saw them record the biggest away win in UEFA Champions League history back in 2010. Goals from Gabriel Heinze, Loic Remy, Lucho Gonzales, as well as a hat-trick from Andre-Pierre Gignac made history with Marseille’s 7-0 rout over Zilina.

What made matters worse for the Slovakian side is how they were making their debut in the competition this year.

For the second Spanish involvement in this list, we have Valencia when they faced Genk in a game they needed to win with both Chelsea and Bayer Leverkusen also being in their group.

A Roberto Soldado first-half hat-trick helped keep Valencia in the race for a round of 16 spot, with goals from Jonas, Pablo Hernandez, Aritz Aduriz and Tino Costa giving the Spanish side a huge 7-0 victory over Genk.

It remains, by a distance, Valencia’s biggest win in the competition.

After finishing above Manchester United in the 2011/12 group stage, Basel were drawn against Bayern in the round of 16 and after a 1-0 win in Switzerland, the Swiss giants had a chance of qualifying for the Champions League quarter-finals for their first time.

Arjen Robben’s opener took Bayern level on aggregate and a goal from Thomas Muller put the Bundesliga side ahead not long after.

The game was dominated by Mario Gomez who scored four goals that night in a season where Bayern would reach the final, only to lose on home soil to Chelsea on penalties.

The season before their embarrassing exit to Bayern Munich, Shakhtar Donetsk recorded their own incredible win in when they went to Belarus to face Bate Borisov in the 14/15 Champions League group stage. The game was dominated by Brazilians with Luiz Adriano scoring 5 for Shakhtar as well as a goal for Alex Teixeira and Douglas Costa to give Shakhtar a 7-0 win in Belarus.

In their third appearance in the Champions League round of 16, Shakhtar Donetsk travelled to Bayern Munich and after a 0-0 draw in Ukraine, the club had a chance to reach the quater-finals.

However, Shakhtar’s hopes were crushed after three minutes when a Thomas Muller penalty put the German giants ahead with Jerome Boateng putting the tie to bed with Bayern’s second after 34 minutes.

The Bavarians didn’t slow down in the second half with goals from Franck Ribery, Holger Badstuber, Robert Lewandowski, Mario Gotze, as well as a second from Thomas Muller to hand Bayern an emphatic 7-0 win over Shakhtar.

Barcelona in the group stage decided to put on a show for their own fans at Camp Nou. Barcelona scored 7 past Celtic that night.  Another reason for that night being special was MSN, the deadly trio of Barca, was on fire that night.

Messi opened the scoring just 3 minutes from kickoff. Celtic too had few chances on the night but Marc Ter Stegen was on a completely different level that night. By halftime, Barcelona was 2-0. But in the second half, Neymar just changed the course of the game; he assisted 4 goals and himself scored one goal that night. Camp Nou witnessed one of the historic nights in UCL in 2016.