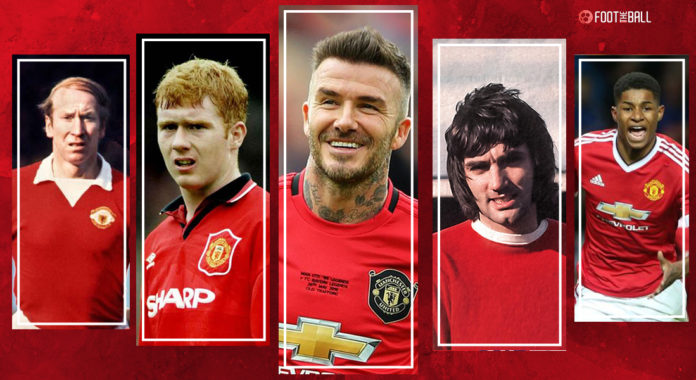 The Class of ‘92 and the Busby Babes. Clubs are lucky to have gotten one sterling youth player in a decade who goes on to become a vital part of the first team. But Manchester United have two batches of world-class Red Devils that formed the spine of trophy-winning machines. For a long time, Manchester United are widely regarded to have one of the best youth academies in football.

Even during the last decade that has seen consistent success disappear, the one constant has been the arrival of youngsters from the academy to give supporters someone to get behind.

United have a unique record of having a youth player be in a competitive matchday squad for the last 83 years.

The next batch is already waiting in the ranks with the likes of Alejandro Garnacho, Kobbie Mainoo, Charlie McNeil and Alvaro Fernandez itching for a breakout.

To celebrate the illustrious history of the club, here are the ten best Manchester United youth academy players of all time, in no particular order.

One-third of the holy trinity whose statue stands in front of Old Trafford (Denis Law and George Best are the others), Bobby Charlton arrived on the scene and changed the fortunes of both club and country.

He was the record goalscorer for the club before Wayne Rooney overtook him.

He was a key player of the English side that won the World Cup in 1996, a feat that hasn’t been repeated since. At the club level, he was the head of the phoenix that rose from the ashes of the Munich air disaster and went on to conquer Europe.

Bobby Charlton and David Beckham in the 80s and 90s. pic.twitter.com/qGd0cjCmqb

His off-field shenanigans, where he is currently facing charges of assault among others have taken the sheen off of Ryan Giggs the person. However, his influence on the pitch is impossible to erase from the annals of Manchester United history.

A famed member of the Class of ‘92, Giggs ended up being the all-time appearances record holder for the club as he constantly adapted his game to defy age. He’s one of the most decorated players in world football and the most decorated United player with 34 titles, with a barely believable 13 PL titles!

To a younger audience, Gary Neville is the ace pundit known for his unabashed and entertaining commentary on the game while fighting political battles off the pitch.

However, he was one half of the most iconic right-wing pairing in United’s history. With David Beckham in front of him, Red Devils’ right side was a puzzle opposition failed to crack. He was an always dependable member who brought steel and leadership to the side along with much-underappreciated quality on the ball.

Phil Neville did not quite reach the heights at United that his brother Gary did, but he was nonetheless a key part of the United squad during its heydays. He moved to Everton in search of more playing time and such was his quality and nature, he instantly became a fan-favourite there too!

He won the PL six times in a decade-long stay at Old Trafford which yielded more than 250 PL appearances. Not bad for the lesser heralded brother!

From the industriousness of the Neville brothers to the man ahead of them providing moments of quality and brilliance. David Beckham is a brand unto himself. Today, he is a fashionista and a business mogul who ranks among the highest-earning sportspersons on social media.

However, during his playing days, Beckham changed how modern football is looked at. His pinpoint crossing and set-piece genius made him a staple of highlight reels. Unlike many others on the list, Beckham’s thirst for new challenges and adventures led him to many clubs instead of spending his career at the club. However, his stay was fruitful, to say the least, including a historic treble.

The “Ginger Prince” was your favourite midfielder’s favourite midfielder. Raking passes from the deep, bullet volleys from the edge of the box, short and simple passes to keep the play ticking – Paul Scholes could do it all. He was even good for a tackle or two if the opponent got too bothersome!

Paul Scholes was often unheralded in his playing days as his impact on the game could not be measured with raw stats. However, he was the engine of every iteration of the United team. He even came back from retirement once to help out the club, looking as graceful and smooth as ever as he bossed his younger counterparts through sheer smarts and skill. No wonder he was one of the players with the longest spells at one club.

It wouldn’t be fair to George Best to put him on any other number than 7. If the No 7 jersey at Manchester United is so iconic today, George Best is the reason why. He was, in many ways, a trailblazing footballer for the modern player who is free from societal conventions and has a life outside football. The Northern Irish magician is one of the three United players to have won the Ballon d’Or during their spell at the club.

George Best with the ball at his feet, and the whole Sheffield Utd defence to beat.

Best was the guy who could create new fans of the club itself due to his sheer magic on the ball and his charming personality off the field. He would be the most coveted player if he played today.

One of the few players from the famed Class of ‘92 who ended up helping the club post-retirement too. Nicky Butt was one of the late bloomers from the class but when he did, he became a key player for the treble winners. There can’t be a better learning experience than working under Roy Keane and Butt moulded himself into an elite defensive midfielder along similar lines. He had a slightly disappointing and injury-riddled end to his playing career. Post that, he joined United’s ranks and led the way for the next generation to make their mark at the club. He left the club last year.

Duncan Edwards is widely regarded as the biggest “What if?” in football history. He was one of the Busby Babes who perished in the Munich Air Disaster. It is widely believed that Edwards had the potential to be the greatest footballer of all time if not for the unfortunate accident that robbed the game of a true maverick.

He was a jack of all trades and a master of them too, and football as a sport is poorer for his short career.

Duncan Edwards would have been 86 today.

He was the player who personified the spirit of the Busby Babes. Strong, fearless, game, and peerless in his ability on the ball, Duncan had an insatiable desire to win and win fairly. He was the jewel in a glittering crown. pic.twitter.com/xRDDvTb4xF

Marcus Rashford is the youngest on this list and therefore, has the most potential to realise. Rashford broke through in remarkable circumstances, scoring a brace on his senior debut, his PL debut and his international debut.

His performances have been up and down, but his commitment to the cause has never wavered. More importantly, he has been the strand of attachment for many fans during this unsuccessful period in the club’s history. His work off the pitch for the underprivileged has seen him awarded MBE. He and the club would hope some more titles on the pitch follow soon.