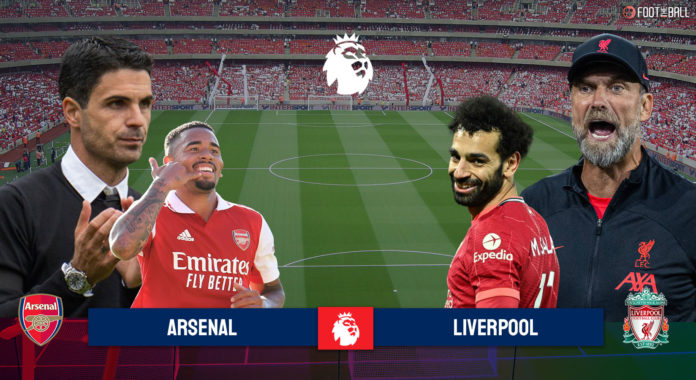 This season, Liverpool and Arsenal have been on the opposite spectrum of form in the Premier League. While Mikel Arteta’s men have been nearly flawless and are currently top of the table, Jurgen Klopp’s men have suffered draws and defeats, languishing at ninth in the table. On the other hand, Arsenal have only suffered one loss this season to Manchester United and are the only thing between Manchester City and the top spot.

Liverpool were also active in the summer transfer window. The Reds completed one of their costliest transfers by signing Darwin Nunez. However, apart from that, they only signed Fabio Carvalho, Calvin Ramsay, and Arthur Melo (signed on loan). Klopp has stressed that he did;t need any new signings in the midfield.

Arsenal have been brilliant so far, and barring the defeat to United, Arteta has managed to deliver victories after victories. The defence has improved massively compared to the last season, with William Saliba being the star of the show. Arsenal have also been brilliant in metrics such as the Passes per Defensive Actions (PPDA) and Field Tilt.

Meanwhile, it has been a horrendous start to the season for Liverpool. The club has only won two matches in the league, drawing four and losing one. Their last match against Brighton was the perfect example of Liverpool’s struggle this season. Klopp’s men conceded a goal in the game’s final minutes to lose three points.

Arsenal are facing Liverpool at the perfect moment and, after a long time, go into this fixture as heavy favourites. So, what does the team news say about both teams?

A step in the right direction 👊

Arsenal have only one major injury concern regarding Oleksandr Zinchenko The Ukrainian has suffered a calf injury with the club still not sure when he will be 100 per cent fit. Other injury concerns for Arsenal are Reiss Neilson, Mohamed Elneny, and Emile Smith Rowe. However, apart from that, Arteta has a fully-fit squad to choose from. The lack of injury has been a significant reason for the Gunners’ high position in the league, and Mikel Arteta will be hoping that it remains the same way.

Liverpool have meanwhile chopped and changed their side throughout the season to improve their form. However, it has not worked so far. The midfield has especially been the main cause of concern. And the issue has not been helped by the injuries to Alex Oxlade-Chamberlain, Naby Keita, and Curtis Jones. Furthermore, Trent Alexander Arnold’s form has also caused significant worry to Klopp. However, the right-back did have an impressive game against Rangers in the Champions League, which could do wonders for his confidence and form.

Arsenal have been a treat to watch, especially when they are in attack, and one of the main reasons is Gabriel Jesus. The Brazilian has scored five goals in eight matches and looks like an impressive investment by the club. However, he has also been ably supported by Martin Odegaard, Bukayo Saka and Martinelli. They have formed an impressive attacking quarter that has given nightmares to the opposition’s defence,

Granit Xhaka has been immense in midfield and provided ample protection to the backline. However, what Arsenal lacked last year was defensive stability, and William Saliba has provided that in spades this season.

For Liverpool, it is hard to find a consistent performer at the moment. Alisson has made crucial saves and is the reason Liverpool are not further down the table. Luis Diaz has also been good, but the player who has surprised everyone the most is Roberto Firmino. The Brazilian is the club’s top scorer with five goals and looks to be Klopp’s best attacker at the moment.

🗣Jurgen Klopp ahead of next weeks #Arsenal vs Liverpool game: “I know that Arsenal is coming and we saw glimpses of their game against Tottenham, they are outstanding in the moment so that is obviously not an easy game. But we will give it a proper try.” 👍🔴 pic.twitter.com/VQ6wnp4Yse

Arsenal are currently the best team in the league after Manchester City and look like the only club that could realistically challenge Guardiola’s men. However, Arteta wanted players in the summer, and he got them and has now made Arsenal a winning machine.

This could be the toughest match of the season for Liverpool, and the quality of Arsenal might be too much for them. FootTheBall predicts a 3-1 win for the Gunners.