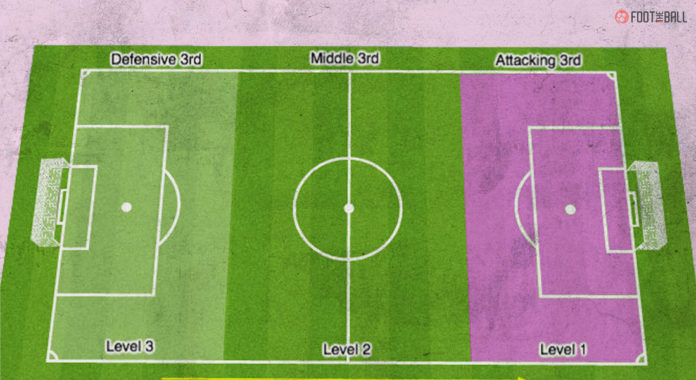 Long gone are the days, when football was all about goals and assists. Well, at least when it came to stats! Fast forward to the present, and football has increasingly become more of a numbers game. Underlying stats like xT (Expected threats), BDP (Buildup disruption percentage) and xOVA (Expected Offensive Value Addition) rule the roost.

Of all the topics in football, the high press has one of the largest discrepancies between the interest of analysts and the ability to quantify it.

High defensive pressure has been measured before, including metrics involving opponent pass completion percentage, as viewed relative to pass difficulty or different parts of the pitch. One of the most notable existing measures of pressing is the PPDA metric.

But PPDA alone cannot help one pin down all measures of pressing. Enter ‘Field Tilt’.

What is Field Tilt?

They are, however, somewhat one-dimensional. Pressing is tough to pin down with event metrics. There’s also more than one way to pressure an opponent, and different teams may have different objectives in attempting to do.

This is where ‘Field Tilt’ comes into the picture. Recently, Spurs’ performances have come under the microscope despite some good results. One reason why is because their field tilt is remarkably low for a team in their position, indicating waning dominance of the field.

Field Tilt is a concept for measuring the share of possession a team has in a game but only in terms of touches or passes in the attacking third — and it is a useful measure of how often a team was able to take the attacking initiative in a game, rather than just holding onto possession for the sake of it.

It seems like some of the teams that rate highly in terms of PPDA might be making their defensive actions in a higher location up the pitch simply because that’s where most of their games take place.

Perhaps the best and most logical way of breaking up the field is in thirds: the defensive third, the midfield third and the attacking third. Passing accuracy percentage is a nice statistic, but it means more in the context of positioning.

Whereas a defender might have a higher accuracy rate than a forward, the defender probably attempts more defensive-third passes, presumably under less pressure.

At the same time, though, it could be argued that passing accuracy in the defensive third of the field is actually more critical than attacking-third passing because to lose the ball in the defending third is to give an opponent a better chance to score.

The same goes for recoveries. Some soccer people often suggest that a match is won and lost in the midfield third.

In isolation, field tilt metrics may not provide too much insight into a team’s success, but it does give an indication of their style in getting the ball into advanced areas compared with the opposition.

No advanced statistic can be looked at in isolation. However, field tilt, combined with Buildupo Disruption Percentage and Passes per defensive action, can give a pretty holistic picture of which way the game is going.