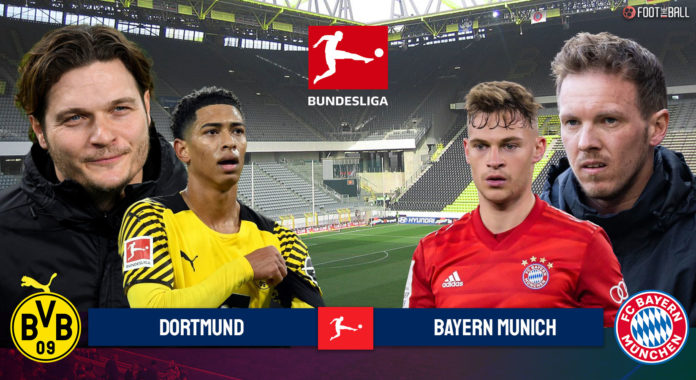 Spain has El Clasico, England has North West Derby, Italy has Milan derby, and Germany has Der Klassiker. While Germany have some brilliant rivalries, such as the Ruhr derby, nothing matches the excitement of a match between Borussia Dortmund and Bayern Munich. The two giants have, over the years, played some brilliant games, some of which have decided the fate of the Bundesliga title race.

Borussia Dortmund, meanwhile, have been doing what they do best: sell a top player and replace them with top young talents. Unfortunately, Erling Haaland was the star sold this summer. The Norwegian signed for Manchester City, and Karim Adeyemi has taken his place.

Bayern Munich appeared to have rediscovered their mojo and are currently top of their Champions League Group, including teams such as Inter Miland and Barcelona. Leroy Sane and Jamal Musiala have been the star in the attack, while Joshua Kimiich has been the midfield linchpin.

Dortmund have also started the season like Bayern Munich, winning five and losing three matches. The team have performed brilliantly in their wins but have also shown their weaknesses in losses. Edin Terzic is still working to find the right combinations and players for the team.

A win for any team will go a long way in determining where the Bundesliga trophy lands. So, what does the team news say about both teams?

Bayern are coming for the 1st place.

Next week: Dortmund vs Bayern 🔥 pic.twitter.com/CJl98X8ebg

Bayern Munich have been marred by injuries from the start of the season. First, it was Leon Goretzka, and now it is Lucas Hernandez. The French defender has suffered an adductor injury and could also miss the World Cup. Other injury concerns are winger Kingsley Coman and Bouna Sarr. Covid-19 has also struck the squad, with Thomas Muller and Joshua Kimmich being infected with the virus. However, the duo are expected to recover before the match.

Borussia Dortmund, meanwhile, have injuries of their own. Mahmoud Dahoud, Marco Reus, Matt Hummels, and Giovanni Reyna are on the club’s casualty list. This has caused problems for Edin Terzic. To make matters worse, one of their top signings, Sebastian Haller, has suffered from Testicular Cancer. This had seriously disrupted Dortmuind’s plan, and with a return date for the Ivorian still not confirmed, the team will have to go about their business without him.

Which of these "Champions League Final Derbies" would you love to watch? 🤔

Bayern Munich, like every year, have multiple game winners in their squad. However, based on form, Leroy Sane and Jamal Musiala look to be the best of the lot. The two Germans have gelled quite well and provide a brilliant incisiveness to Bayern’s attack. However, it is the defence where Bayern have improved themselves.

Alphonso Davies has been the other star. The Canadian has been a revelation ever since he made his debut, and this season has been no different. His partner on the other flank, Mazraoui, has also been brilliant.

For Borussia Dortmund, it has been the case where every player has contributed to the team. However, the star of the show has undoubtedly been Jude Bellingham. The Englishman has been the creator-in-chief of the team and has also chipped in with goals.

Nico Schlotterbeck has been the other star. The German has marshalled Dortmund’s defence well and will also be key for Germany at the World Cup.

The Der Klassiker is surely the best clash in Bundesliga and always attracts the eyeballs. The match assumes more significance with Bayern Munich and Borussia Dortmund, both not in top form.

Borussia Dortmund’s home stadium has one of the best atmospheres in Europe and can intimidate any visiting team. However, Bayern Munich are one of the few teams that can cope with the pressure.