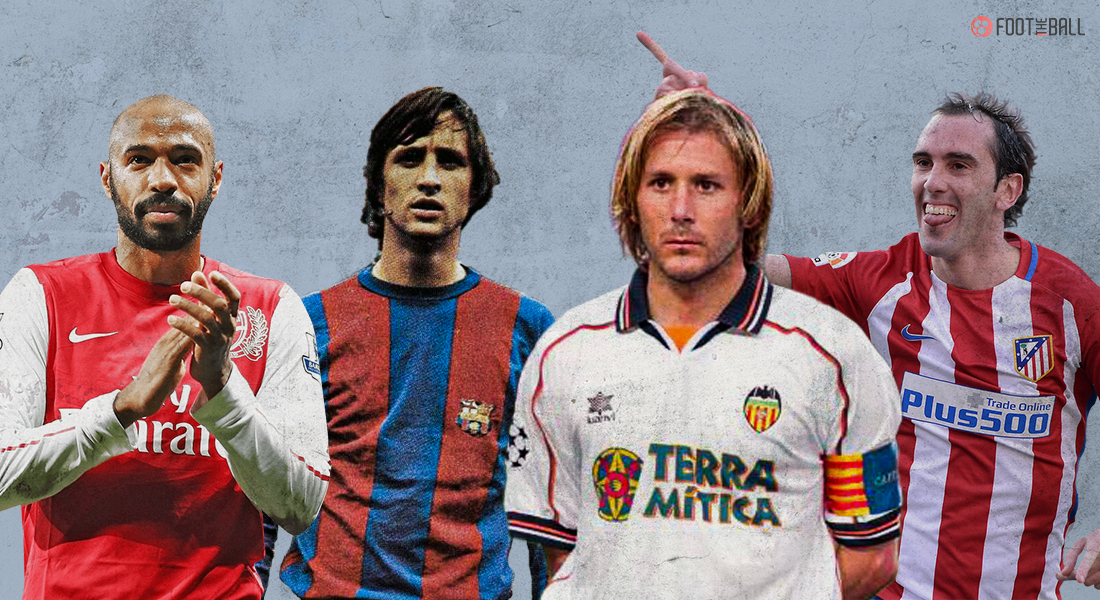 As Paris Saint-Germain and Manchester City meet in the second-leg of their Champions League semi-final next week, a little history is in the making. Whichever team goes through will have the chance of lifting Europe’s most coveted club competition by defeating one of Real Madrid or Chelsea in Istanbul. For City, it will be their first ever final of Europe’s premier competition while PSG have played just once in the showpiece – in last year’s loss against Bayern Munich.

Whichever team does go out can justly count themselves amongst one of the greatest squads assembled to not have lifted the trophy yet. They will join a long list of teams that were filled with star-studded players but fell short in Europe. FootTheBall recounts seven of the greatest teams not to win the European Cup/Champions League:

Diego Simeone’s and league winning, cojones-filled squad- this team was the definition of ‘team spirit’ and ‘everyone playing for everyone’ without a true single superstar. With defensive stalwarts Diego Godin and Miranda, the midfield masters Koke, Gabi, Raul Garcia all in behind Brazilian phenom Diego Costa and veteran David Villa, Athletico went all the way to the final in 2014 against city rivals Real Madrid.

3 – Atlético Madrid have always progressed against German opposition in the knockout stages of the UEFA Champions League (vs Leverkusen in 2014/15 and 2016/17; vs Bayern Munich in 2015/16). Hope. pic.twitter.com/hwpbeIh8k0

They upset Barcelona and Chelsea along the way, as Simeone’s side grew quietly confident. Godin gave them the lead at the half-hour mark, but Sergio Ramos equalized in the 93rd minute to force extra-time. Los Blancos dominated the next thirty minutes as Atletico lost 4-1.

Los Rojiblancos were back for the ride in 2016, having an even superior squad bolstered by the likes of French sensation Antoine Griezman in attack, midfield generals Thomas Partey and Saul Niguez with goalkeeper Jan Oblak manning the sticks.

They once again matched up with Real Madrid in the final, again upsetting Barcelona in the quarter finals and Bayern Munich in the semis. This time it finished 1-1 even after extra-time and with Juanfran missing the in the subsequent shootout, Simeone’s men once again fell short.

The ‘Invincibles’ squad under Arsene Wenger went the full league season unbeaten, a record in the Premier League era. Big things were expected of them in Europe, but it all came to a rather premature end. Having topped their group and defeated Celta Vigo in the round-of-16, Wenger’s men came up against Mourinho’s Chelsea, whom they had already defeated three times previously.

A 1-0 win at Stamford Bridge further buoyed spirits, but that was as good as it got for the Gunners. They lost 2-1 at Highbury in the second-leg with Frank Lampard and Wayne Bridge scoring the victorious goals. But two years later, they would exit the tournament in even more heartbreaking fashion.

Larsson turned the 2006 #UCL final around, coming off the bench to set up both @FCBarcelona goals pic.twitter.com/4u1pcmjBVW

2006 saw the London club go all the way to the final led by French star Thierry Henry and much of the Invincibles core intact. A red card to Jens Lehman in the opening 20 minutes seemed to derail the evening but Sol Campbell gave Arsenal a shock lead going in at half-time.

The score remained the same till the 76th minute, when Samuel Eto’o equalized and then Juliano Belletti of all people scored five minutes later, both assisted by Swedish sub Henrik Larsson, to win the cup for the Blaugrana.

Hector Cuper’s side had few bonafide stars but big hearts. With shades of Diego Simeone’s 2014 side which lacked a true superstar, and led by Spanish stars Gaizka Mendieta in midfield and Santiago Canizares in goal, Los Che made their way through two group stages before thumping Serie A champions Lazio and fellow Spanish side Barcelona to set up a date with Real Madrid. But Valencia lost their way in the final as the capital club thumped them 3-0 to win the first Champions League trophy of the millennium.

They were back again next year, having added Argentinian play-maker Pablo Aimar, Valencia made their way through the qualifiers before upsetting Arsene Wenger’s big guns and Leeds United as Bayern Munich waited in the final, still licking their wounds from the 1999 final loss.

Mendieta gave his side the lead but Bayern levelled it up just after half-time. As the match went into penalties and then sudden death, future Southampton manager Mauricio Pellegrino missed his kick as the German side won 5-4.

Legendary playmaker Johan Cruyff arrived in Barcelona on the back of three successive European Cup victories with former club Ajax. The Dutchman would have an immediate impact, leading the club to their first league championship since 1960 which included a hammering of arch-rivals Real Madrid 5-0 at the Santiago Bernabeu. He became entrenched in the philosophy of the club, as fans loved him to bits.

Though his five year stay at Camp Nou would yield him many honours, including the Balon D’Or in 1973 and 1974, and finishing runners-up at the World Cup in 1974. However, his only other trophy for the club would be the Copa Del Rey in 1978 as the European Cup remained out of reach.

Their biggest chance at winning came in the 1974/75 campaign where the Blaugrana made it all the way to the semi-finals of the competition before falling to Leeds 3-2 on aggregate. The club never made it back during Cruyff’s time as a player as one of the two Madrid clubs continued to represent Spain in on the continental stage. It would take the Dutchman’s return as manager to lead the club to European success more than a decade later.

Jose Mourinho had just won the 2004 Champions League with Porto, and his new club broke all sorts of records in his first season at Stamford Bridge. Chelsea finished with a then-record 95 points on their way to the title, as they also set the records for the most wins (29), most away wins (15) and most clean sheets in a season (25). On the European front though, their journey ended mired in controversy.

The team featuring burgeoning stars including captain John Terry, Didier Droga, Frank Lampard, Arjen Robben, Petr Cech suffered just one defeat in the group stage as they finished in first place. Barcelona were waiting in the round-of-16 and after losing the first-leg away, Mourinho and co. thumped them 4-2 at the Bridge to move onto the quarter-final to face German giants Bayern Munich.

11 goals were scored over the two legs as Chelsea eked out a narrow 6-5 aggregate win to set up an all English showdown against Liverpool.

The semi-final would go down in infamy. After a nil-nil affair in the first leg, Liverpool’s Luis Garcia scored the now infamous ‘ghost goal’ three minutes into the second match, and the match finished 1-0 to the Reds.

Emilio Butragueno and his cohorts (Rafael Martin Vasquez, Michel, Sanchis, Miguel Pardeza) known together as the ‘La Quinta del Buitre’ in the Spanish press after impressing for Real Castilla as they won the 1983/84 Segunda division with all of them playing major roles.

Promoted soon after to the senior side, they dominated La Liga for years to come. Though Pardeza left in 1986, the addition of Hugo Sanchez, considered the greatest Mexican to play the game, led the team to five consecutive league titles between 1986 and 1990.

Our legend Emilio Butragueño, leader of the "Quinta del Buitre".

The first of those titles came on the back of a six-year dry spell, and finished with Los Blancos lifting their second consecutive UEFA Cup in 1986. The two Cups, five league titles and a whole host of other cup competitions aside, this legendary team failed to win the European Cup.

They were knocked out at the semi-final stage for three consecutive years from 1987-1989, including a 5-0 demolition job by AC Milan in 1989. They were eliminated by the same team in 1990, this time in round of 16 as the ‘cohorts’ started leaving as the new decade began.

Kubala was one of the most prolific goalscorers of all time with more than 200 goals for the club while Spanish midfielder Luis Suarez was a 1960 Balon D’Or winner and one of the key cogs of the Barcelona era that dominated the national scene. Kubala won league titles in 1952 and 1953, and with the arrival of Suarez in 1955, the Blaugrana won a further two consecutive league titles in 1959 and 1960.

Barça's dominance could have been even greater if it had not been for the unsuccessful effort to sign Alfredo Di Stéfano in 1953, which kept the team from bringing together to the two greatest stars of the era.

In Europe, the club had won the first two editions of the Inter-Cities Fair Cup spanning 1955-1960. But the European Cup eluded their grasp so far, with Kubala and Suarez coming closest in 1961 when they defeated Real Madrid, who had won the first five tournaments, in the first round inspired by Suarez’ two goals. They met Benfica in the final, but lost 2-3 to the Portuguese giants.